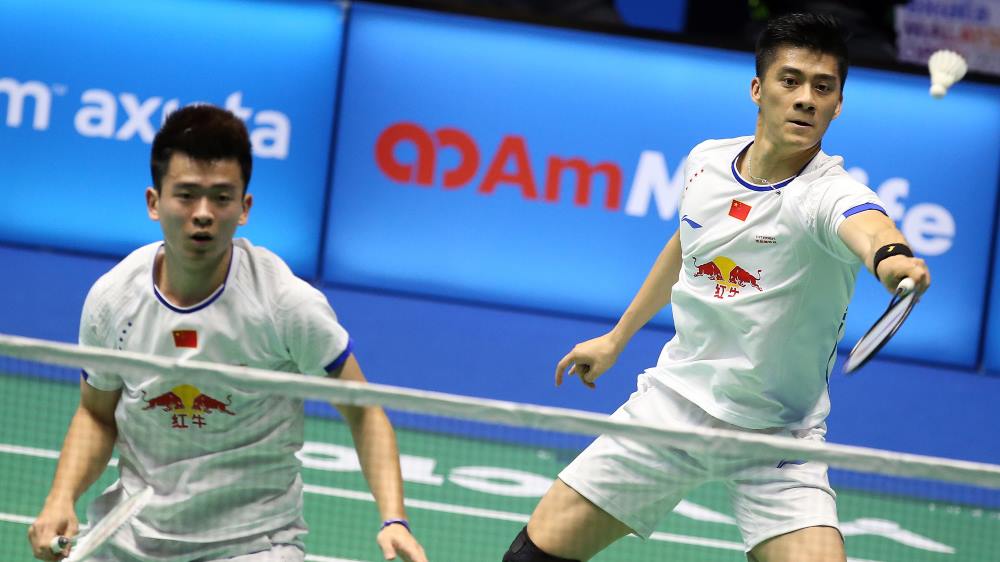 Fu was mostly out of action since winning his second Olympic gold medal in August in Rio – he played two Superseries in October last year, winning one match and losing two with Xu Chen. On Wednesday, Fu showed his skills were still pretty sharp as he and new partner Zheng Siwei (featured image) put out Russian duo Vladimir Ivanov/Ivan Sozonov in the Men’s Doubles opening round: 22-20 17-21 21-14. “Honestly, after the Olympic Games, I thought about quitting, but I still love this sport and believe I’m still able to give a fight,” said the accomplished Chinese veteran. “I’m partnering Zheng (Siwei) for this tournament; this kid has been doing well in Mixed Doubles, and we can see he’s good in Men’s Doubles too. I think that’s why the team wanted me to partner him here. I’ll partner Zhang Nan for the Badminton Asia Championships in Wuhan.” “The pressure wasn’t on us but we rushed it in the second game and that affected our rhythm,” said Ong. “This is a Superseries Premier, all our opponents are very strong so we are just hoping to give our best. Our target this year is to break into the top 15.”

Men’s Singles saw the upset of No.6 seed Tian Houwei (China) at the hands of French qualifier Brice Leverdez, 21-17 21-16. Leverdez will take on another qualifier, Jeon Hyeok Jin (Korea) in the second round.

The Malaysians seemed to have wrapped the match in the third with a 19-14 lead and with the Chinese appearing wayward and not their usual combative selves. Four match points went abegging, allowing Bao/Yu to catch up at 20-all. Both teams had their opportunities to close it out – the Malaysians blew three more match points – until the Chinese eventually converted their fourth match point.

It was a good day for Japan in Women’s Doubles, with Yuki Fukushima/Sayaka Hirota and Naoko Fukuman/Kurumi Yonao joining Shiho Tanaka/Koharu Yonemoto and top seeds Misaki Matsutomo/Ayaka Takahashi in the second round. Women’s Singles second seed Carolina Marin got off to a smooth start with a 21-16 21-11 win over Hong Kong’s Yip Pui Yin.

“It’s always important to start strongly,” said Marin. “In the first game I had to focus on controlling the shuttle because I had to know where the drift was. In the second I started well, I showed I wanted to win easy.”

Talking about her loss in the final of the India Open on Sunday, Marin said she had put it out of her mind: “Of course I have to learn about the final, but that was on Sunday and we’re in Wednesday and I’m looking forward to the game tomorrow.”