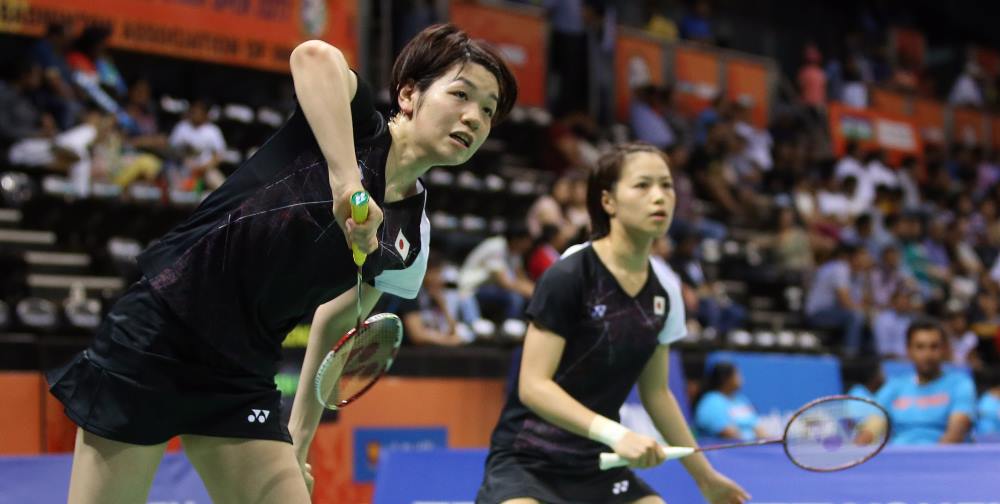 Incidentally, the Japanese (featured image) had fallen to the same opponents in the first round of the same event last year.

Despite losing a thrilling first game – which the Chinese took 30-29 – the Japanese Women’s Doubles pair stuck to their steady game, taking few risks and capitalising on the few openings they made. The 29-30 21-18 21-15 result ensured an all-Japanese semi-final against Naoko Fukuman/Kurumi Yonao, who progressed in three games over Denmark’s Maiken Fruergaard/Sara Thygesen. In Men’s Doubles, top seeds Goh V Shem/Tan Wee Kiong (Malaysia) went down in quick time to China’s Li Junhui/Liu Yuchen 21-15 21-17. The Malaysians just couldn’t get going, faltering with their length and being unable to wrest the initiative.

In the other half, Yonex All England champions Marcus Fernaldi Gideon/Kevin Sanjaya Sukamuljo (Indonesia) edged past Russians Vladimir Ivanov/Ivan Sozonov 21-18 22-20.

“We expected a tough match,” said Fernaldi. “They play fast, the tall guy (Ivanov) smashes hard. It’s a little confusing to play them.

“The conditions are different from last year. The shuttles are fast and it’s windier. We must learn to adapt.”