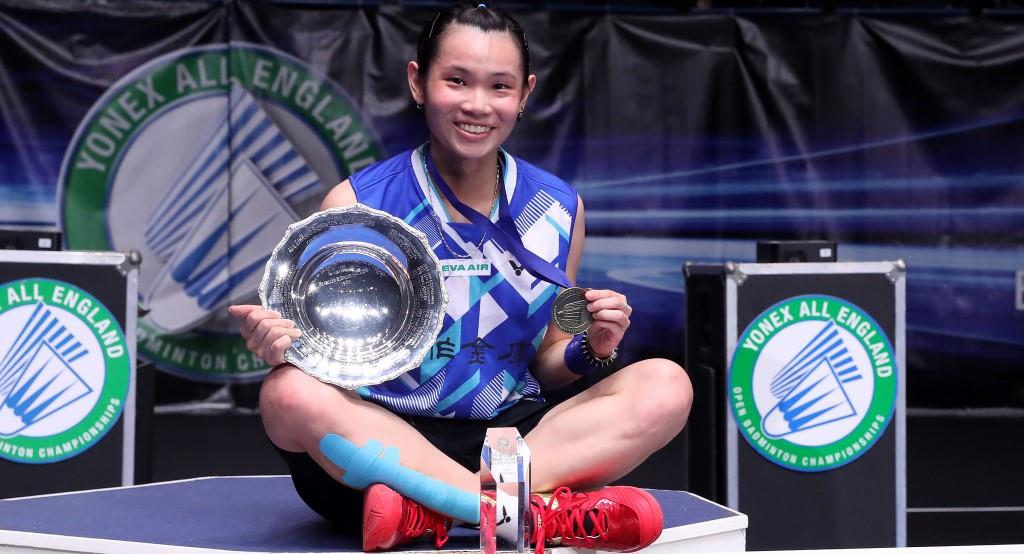 Tai Tzu Ying underlined her current status as ‘the one to beat’ in Women’s Singles, today lifting her third straight World Superseries title.

Continuing where she left off last season, the Chinese Taipei player etched her country’s name in history at the YONEX All England Open Badminton Championships in Birmingham.

In a battle of wills, as much as skills, the top seed and world No.1 outwitted Ratchanok Intanon, 21-16 22-20, to claim her country’s first Women’s Singles success at the ancient and prestigious event. Her victory extended her unbeaten streak in the MetLife BWF World Superseries in which she concluded last year with titles in Hong Kong and the season finale in Dubai.

“It was an intense match so I am happy to win. I don’t think I made too many mistakes. The scores were always close. During the second game I was trailing a few times but I kept telling myself not to give up,” said the new champion (featured image). “When Ratchanok attacks she is really good. She is very tricky so I did a lot of work on my defence. I was trying to find opportunities so I could beat her.”

The much-anticipated last match of the finals lived up to its billing as both young – and equally talented – guns dug deep into their respective bags of tricks in the quest for glory. Audible gasps and repeated bursts of applause from spectators, who faithfully stayed until the finish, denoted how much they appreciated the deft touches, changes of pace and all-court wizardry which two of the best in the business rolled out during their clash of high intrigue. In the end, it was a few points here and there – blended with the odd stroke of luck and daring – which turned the match in Tai’s favour. Intanon may well wonder how it all unravelled so quickly. At 20-18 ahead in the second game, she celebrated game point prematurely, only for Tai’s successful challenge to tighten the score to 20-19. In a flash, Intanon’s game point transformed into Tai’s championship point and, as Intanon’s shuttle strayed over the baseline, Tai delighted in her maiden All England crown; another big title for this small and unassuming athlete.

“It’s disappointing for me but it was a wonderful match,” said Intanon.

“I was nervous but I played well – but Tai played better. I will have to improve for future tournaments.”

If the Women’s Singles showpiece was evenly matched, the men’s equivalent was completely opposite as Lee Chong Wei put on a master-class, whipping Shi Yuqi, 21-12 21-10. The slick and easy manner in which he glided around the court, plus full-stretch dives and sizzling jump smashes, almost made a mockery of the national panic that surrounded his left-knee injury some weeks ago.

Wielding his racket like a rod of correction, the 34-year-old Malaysian strutted around centre court at Barclaycard Arena like it was his own backyard as he bossed his way to a fourth All England honour.

“I was not 100 per cent recovered. I focused on one match at a time. After I won my first few matches here, I became more confident. I am very happy. This is the first big tournament for the year and I hope it will motivate me,” said Lee, promising to defend his title in 2018. “I have won a lot of Superseries but All England is a different feeling because it’s an amazing tournament – my favourite tournament.”

Meanwhile, Shi reflected on the lessons to be learnt…even if the tough way.

“I can learn a lot from Lee Chong Wei. He is better than me, both in skills and tactics. He always thinks faster than his opponents.

“I was very excited to play him in this final because the All England is a tournament I have watched on television and now I am actually here.”