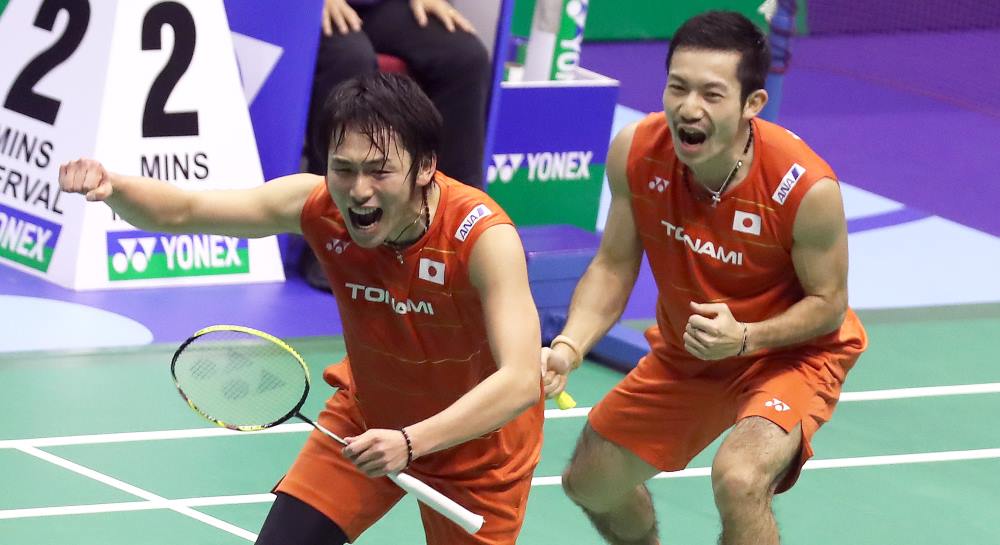 Takeshi Kamura and Keigo Sonoda’s impressive late-season form last year signalled that they will be one of the Men’s Doubles pairs to watch in 2017. The Japanese duo, having been on the threshold of World Superseries glory over the last couple of seasons, finally broke through at the Yonex-Sunrise Hong Kong Open last November. Their form carried through to the prestigious Dubai World Superseries Finals, where they made the title round despite a setback in their first group match.

The affable Japanese duo talk to Badminton Unlimited about their partnership, their run of form and their hopes for the big challenges coming up this year:

Kamura: Getting into the final at the Singapore Open gave us a bit of confidence and since then we sort of let go and were able to play aggressively in our assigned roles, in our case me at the net and Sonoda at the baseline, and so I think we are combining well and that has helped us advance to at least the quarter-finals consistently.

On their long partnership

Sonoda: I started playing when I was a third grader in a local school that was very strong in badminton. At Yatsushiro Higashi High School which is also located in my hometown, I teamed up with Kamura to play doubles. Upon graduating from high school I played for a local corporate team but it disbanded so I transferred to a team at Tonami Logistics and there, I got together with Kamura again.

Kamura: We did well in doubles. I was able to play my favourite game style where I could just drive the shuttle, so that was the beginning that led us to where we are now.

To win any title in the world stage is not an easy task but when we took the first International Challenge title, it gave us confidence and reassurance that we could go for the world stage. Their consistency in Superseries

Sonoda: Advancing to the final of the Singapore Open gave us the confidence and assurance that we could indeed make it to the final at a Superseries, and we’ve also made the top 8 or top 4 consistently, and finally at the Hong Kong Open we took the title so I was very happy about it.

Kamura: Since playing the final in Singapore, I became confident and I felt that we could win a title. Since that, we advanced to the top 8 regularly, so I was confident that we would reach another final for sure and would win a title sooner or later.

Kamura: It will be our first time at the Sudirman Cup, and I’d like us to deliver as the first doubles, and I believe Japan has never won yet, so as a team we will unite and since Japan’s Women’s Singles and doubles are performing so well, I’d like to show how good men’s badminton is.

Sonoda: Our victory in the Hong Kong Open gave me the confidence that as long as we get to play our game, we can win so I would like to prove that in the World Championships. Until then I’m not going to waste any time.

Watch Kamura and Sonoda in Episode 160 of Badminton Unlimited: