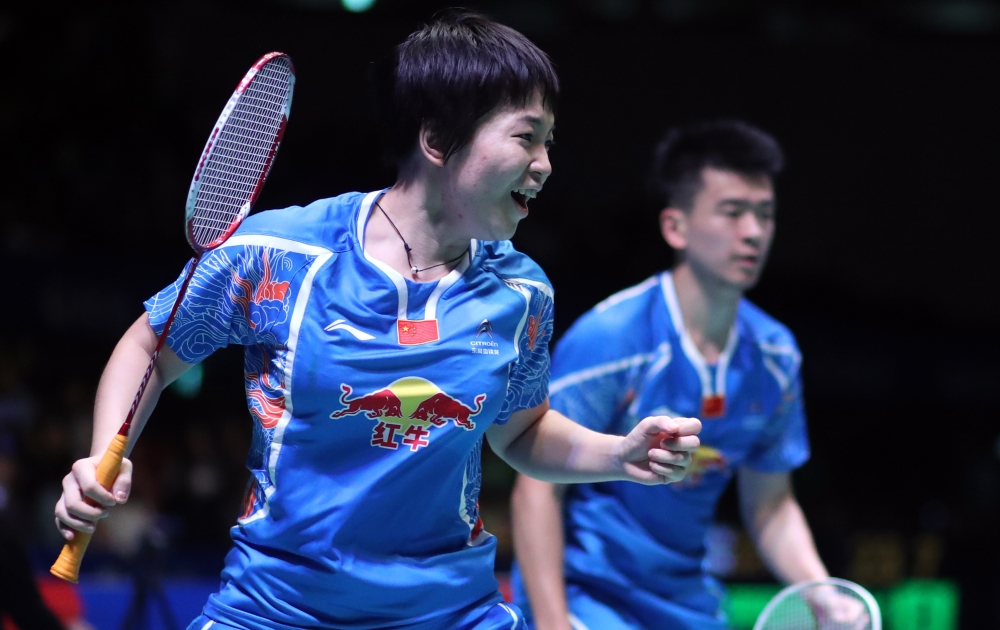 Two recent awardees of BWF’s ‘Most Promising Player of the Year’ award dominated the narrative in Mixed Doubles as 2016 drew to a close.

China’s Zheng Siwei – Most Promising Player of 2015 – and his Mixed Doubles partner Chen Qingchen – this year’s awardee – made a stunningly rapid transition to elite-level excellence after their conquest of junior honours. It has been less than four months since the split/retirement of one of the world’s greatest pairs – Zhang Nan and Zhao Yunlei. Their replacements, it appears, have already arrived.

The young Chinese duo’s unbeaten streak at the Dubai World Superseries Finals – the season-ending event of the world’s top eight pairs – highlighted the fact that the ‘generation next’ of badminton are already the ones to beat.

The duo claimed their first World Superseries title at the Yonex Open Japan – the first Superseries of the post-Olympics season. The very next week they were runners-up to Korea’s Ko Sung Hyun/Kim Ha Na on their opponents’ home turf. Two more Superseries final appearances followed – in Denmark, where they lost to home pair Joachim Fischer Nielsen and Christinna Pedersen, and in France, where they beat Ko/Kim. Considering that the Chinese were runners-up at the Xiamenair Australian Open – their record is nothing short of sensational: five straight Superseries finals, of which they won two.

And finally, in Dubai, the Chinese (featured image) wrapped up an extraordinary season by winning their five matches at the cost of only one game.

In match after match, Zheng and Chen showed why they are likely to be an irresistible force in the coming months – quickness of hand, foot and mind, blistering power, imaginative play, and a calm indifference to pressure. Many records are likely to fall by the wayside if Zheng and Chen play the way they have over the last quarter. If Zheng and Chen emerged as new stars in Mixed Doubles, some familiar names showed they were far from being done with the game. Tontowi Ahmad and Liliyana Natsir could not have picked a better time to peak – the Indonesians shrugged off their mid-season’s wretched form to surge to the Rio Olympics gold. With it came a wave of confidence which they rode to back-to-back Superseries wins in China and Hong Kong. A total of three Superseries (the Celcom Axiata Malaysia Open being the other) and the Olympic gold meant that the experienced Indonesians are still very much at the top of their game. Their younger compatriots, Praveen Jordan and Debby Susanto, had the perfect start to the year, winning the hallowed Yonex All England, but could not recapture the same form since then. Jordan and Susanto’s form revived late in the season, when they made the final of the Yonex-Sunrise Hong Kong Open and the semi-finals in Dubai.

Fischer Nielsen and Pedersen peaked at their home Yonex Open Denmark; they also had impressive performances through the year, beginning with the Yonex All England (runners-up), Malaysia Open (semi-finals), Yonex French Open (semi-finals) and Dubai World Superseries Finals (semi-finals), besides winning the European Championships. Their one big disappointment would be the Olympics, where they failed to make the knock-out stage. China’s Lu Kai and Huang Yaqiong also had a bright season – winning the Yonex Sunrise India Open and the Australian Open, but another top Chinese pair of recent times, Liu Cheng and Bao Yixin, faded away this year. Ranked No.2 last December, Liu/Bao had some middling performances until they were split in November.

The greatest contemporary Chinese Mixed Doubles pair – Zhang Nan and Zhao Yunlei –had an unremarkable Superseries season by their standards – semi-finals in England, Malaysia and Indonesia – but their best was reserved for the Badminton Asia Championships in May, where they once again tormented familiar foes Ahmad/Natsir in the final. The Indonesians however had their revenge in the semi-finals in Rio, where the Chinese had to settle for bronze.

The post-Olympics period saw the retirement of Zhao Yunlei, the Olympic bronze adding to a rich rally of other Olympic and World titles; Zhang Nan’s journey however continued with new partners such as Li Yinhui, with whom he has already excelled. Zhang/Li are among several new partnerships in the post-Olympics season; having finished runners-up in China and semi-finalists in France, besides winning the Macau Open (GPG), Zhang/Li might be one of the pairs that dominates the headlines in 2017.

The most consistent pair during 2016 was Ko Sung Hyun/Kim Ha Na. The Koreans won titles in Singapore and Korea, besides finishing runners-up in Indonesia, Japan and France; their consistency was rewarded with the top ranking in December. Zheng/Chen have set the pace – but will they be reined in next year by experienced foes and new rivals? That question will be uppermost on the minds of badminton fans come 2017.