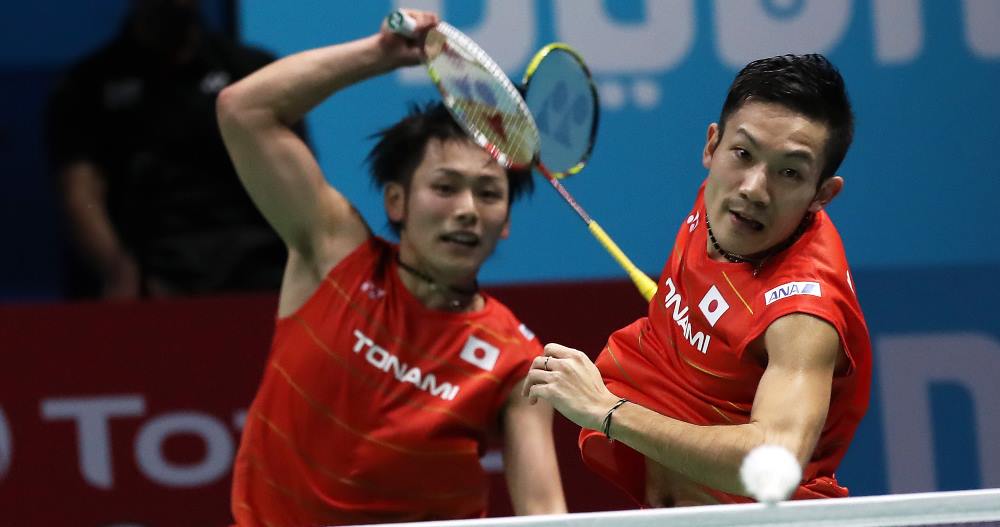 Following her victory in the Women’s Doubles in an earlier session, Chen teamed up with Zheng and the pair barely put a step wrong in overcoming Denmark’s Joachim Fischer Nielsen/Christinna Pedersen 21-14 21-18. Zheng and Chen were in full flow; Fischer and Pedersen didn’t have a bad day but the Chinese excelled in all departments. The Danes kept up the challenge in the second, but the Chinese pulled away at the very end.

“This is one of our biggest successes so far,” Zheng said. “We had to work hard today. We were relaxed and tried different things which came off.” As with yesterday’s victory over Malaysia’s Lee Chong Wei, Axelsen showed evidence of a new steadiness in his game under pressure. Son levelled a deficit in both games, but each time Axelsen refused to let that affect him and chose the right moments to attack. The match was won on the fourth match point: 21-17 21-19.

“I went in a little bit tired after the long match yesterday,” said Axelsen. “To be in the final again – I’m so happy. I have what it takes to win. It’s a matter of recovering from today’s match.

“A lot has happened since last year’s final. I have learned a lot. I don’t need to do anything different – it’s the same court and same conditions, only a different opponent. Tian had a good win today. It will be another tough game tomorrow.”

The Women’s Singles semi-final saw Korea’s Sung Ji Hyun going in with a 3-6 career record against the in-form Pusarla V Sindhu, her last result being a narrow loss in the Thaihot China Open.

The Indian’s explosive physical game contrasted with the serene movements of the Korean; once Pusarla took the second game, she appeared to have the momentum going her way, but Sung quickly took charge of the decider, running away to a 10-5 lead. Pusarla’s level dipped by a notch, and the Korean exacted her toll, pinning the Indian to the back and forcing her to run the long diagonals. The Indian, scurrying from corner to corner, couldn’t regain the initiative and Sung stitched up the contest, 21-15 18-21 21-15 in 76 minutes.

“It’s my second final in Dubai, this time I will try to do better,” said Sung, who lost the 2014 final in Dubai to Tai Tzu Ying. “Tai is good at attacking and deceptive play. I will be prepared for that. To win here will be a big motivation as this is the last tournament of the year, and it’s a Superseries Premier. If I can win tomorrow, it will be one of the biggest titles in my career.” “It would mean everything to us to win tomorrow,” Goh said. “The Japanese played well today. I hope we can enjoy our game tomorrow.”