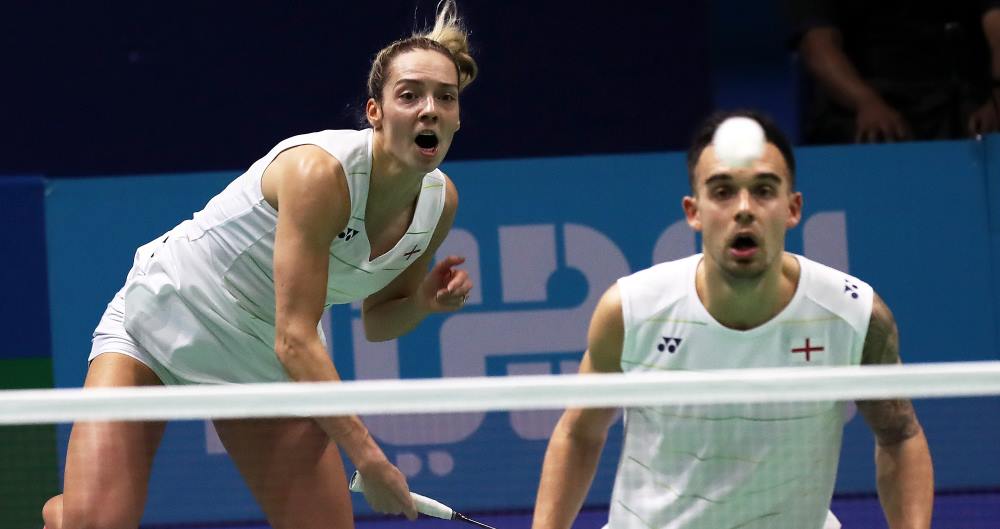 Chris Adcock and Gabrielle Adcock stayed in the hunt for defending their last World Superseries title,

beating Lu Kai and Huang Yaqiong in a close final group match to make the semi-finals of the Dubai World Superseries today.

The England Mixed Doubles duo (featured image) saved four game points against the Chinese in the opening game, which turned the complexion of the match. They kept apace in the second and stole ahead at the very end: 24-22 21-19.

“Really close match,” said Chris Adcock. “We didn’t get our tactics right today, so we’re happy to go through, but the performance needs to improve tomorrow. Our third semi-finals in a row (at the World Superseries Finals), so we’re very happy, hopefully we can repeat last year’s performance.” Axelsen kept his nerve in a tense final group Men’s Singles match against Lee Chong Wei, earning his first victory in ten encounters over the World No.1 and sending the Malaysian out of the season-ending event. Pusarla had it easier against Spain’s Carolina Marin, with the Olympic champion appearing out of sorts as she collapsed to her third straight defeat of the tournament.

The much-awaited contest between the Olympic Women’s Singles finalists went the Indian’s way 21-17 21-13; the result saw her finish second in Women’s Singles Group B, behind China’s Sun Yu.

Pusarla needed a win to progress into the last four, since the other contender for that place, Japan’s Akane Yamaguchi, had a better game difference despite losing to Sun Yu today. “I didn’t check the equation because it’s complicated,” Pusarla said. “I just went for the win. I wasn’t thinking of the Olympic final either.”

Marin showed only glimpses of her best form. Pusarla, on the other hand, kept up her attack from the beginning, until Marin self-destructed in the end with a slew of errors.

“I have to get treatment for my lower back,” said Marin. “I visited the doctor last week and he recommended some tests. I’m not really disappointed at not winning a Superseries this year because I won the biggest tournament of all, the Olympics.” Yamaguchi had a good start against Sun Yu, but faded after winning the opening game. The third game was untypical of the combative Japanese, who slumped to 0-10 and 7-19 before Sun Yu finished the match 15-21 21-10 21-10.

Axelsen’s Group B match against Lee Chong Wei was a spectacle of fast-paced badminton from both ends. Lee, playing his first event since a hamstring injury in October, was still in fine fettle, drawing astonished reactions from the sizeable crowd with his quickness and spectacular defensive skills. Axelsen dominated in fits and starts, but when he let go of a lead in the third game with some erratic play, the match seemed to be slipping from his hands. A couple of wayward smashes hinted at his nervousness, but to his credit, he quickly shook that off and tightened his game once again, challenging his opponent to come up with the goods.

The Dane won a crucial point for 19-18 when Lee fired just wide after a fierce exchange. Lee then pounced at a net kill, only to be faulted by the umpire as his racket touched the tape. The Malaysian saved a match point but it all ended in an anti-climax when he served into the net, giving Axelsen the match: 14-21 21-14 21-19.

“On the last point, the shuttle slipped a bit,” Lee said. “I played much better compared to my last two matches. I’m okay with the loss; I’m looking forward to preparing for next year.”

“I wasn’t at my best and I don’t think he was either, but when you’re on court, all you want to do is win,” said Axelsen. “I’ve lost many times to him so it’s a big win for me and I want to enjoy it.

“I’ve lost nine times to him, I’ve been in six Superseries (losing) finals… but you fall and you stand up again. I’m going to stand up every time I fall. It’s a privilege to play these matches so I’m going to enjoy the moment. If you are too hard on yourself when you lose you will never accomplish everything. You keep going and good things will be waiting.”