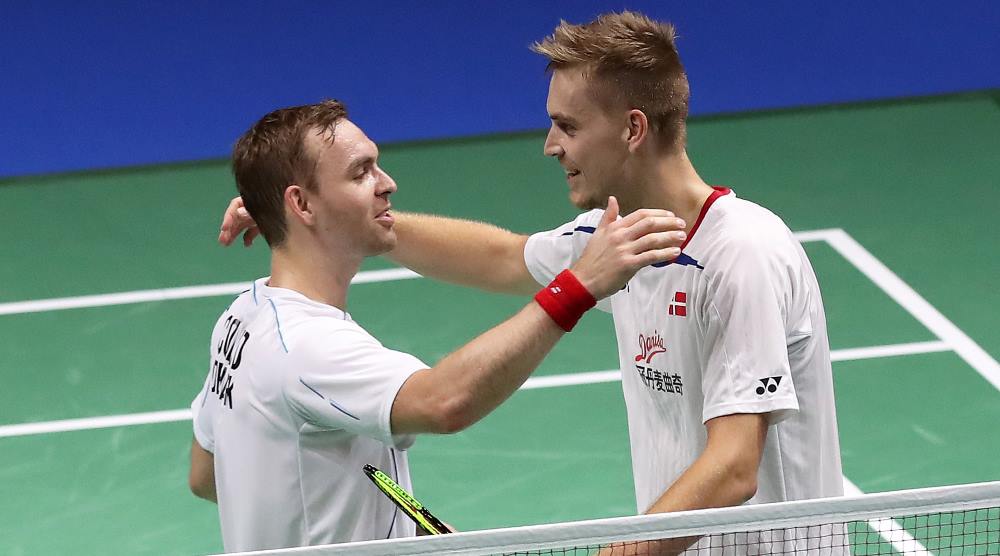 Mads Conrad-Petersen and Mads Pieler Kolding played some of their best badminton in recent times to cruise to a second straight victory at the Dubai World Superseries Finals today. The Danes faced three-time World Superseries winners Kevin Sanjaya Sukamuljo/Marcus Fernaldi Gideon (Indonesia) in their Men’s Doubles Group A encounter; 39 minutes of unrelenting intensity later, Conrad-Petersen and Kolding had the match in their bag: 21-12 21-19, to assure themselves of a semi-final place. The Danes haven’t been in a Superseries semi-final since the BCA Indonesia Open in June.

Kolding and Conrad-Petersen (featured image) were sharp all through, outplaying the Indonesians in the quickfire exchanges and putting away their smashes whenever they worked out an opening.

Having beaten Japan’s Takeshi Kamura/Keigo Sonoda in straight games yesterday, the Danes were bursting with confidence.

“Yesterday and today was some of our best badminton in the last few months,” said Kolding. “But we can build on this and we want to see if we can go further. We had some minor injuries… when you’re not playing well, you feel it more. It’s more a mental state than an injury. Now we can’t feel anything because we’re playing so well.”

“We controlled the match,” added Conrad-Petersen. “They were almost lucky to get it tight in the end. If

you’re not ready against them you have no chance. They’re so skilful, they can do so much with the racket. We just tried to focus on ourselves. We want to enjoy being here and try to keep smiling on court and have fun.”

Kamura and Sonoda recovered from yesterday’s mauling to record a 33-minute victory over Indonesia’s Angga Pratama/Ricky Karanda Suwardi, 21-15 21-9, their first win in five matches over the Indonesians.

“We played patiently today, that was the key as they tend to get restless,” said Kamura. “We studied our previous losses and changed our tactics. Earlier I used to try to intercept everything at the net, but now I’m more judicious about my interceptions.”

China’s Chen Qingchen and Jia Yifan overcame mid-match resistance from second seeds Christinna Pedersen/Kamilla Rytter Juhl to grab their second straight win in Women’s Doubles Group B. The Danes had a grip on the proceedings with a 21-14 second game victory, but Chen and Jia stormed back in the third and assured themselves of a semi-final place. The Danes’ clash with Korea’s Jung Kyung Eun/Shin Seung Chan tomorrow will decide the group’s other semi-finalists. Jung/Shin won a tight battle over Malaysia’s Vivian Hoo/Woon Khe Wei, 21-19 21-17. In Group A, Korea’s Chang Ye Na/Lee So Hee got their second straight win with a 21-14 21-10 result over Japan’s Kurumi Yonao/Naoko Fukuman.

“We weren’t really comfortable in the beginning of the match,” said Chang. “The Japanese are very strong defensively. It’s a test of our stamina, so we had to retain our focus till the end.”

“Two good wins, that’s what I hoped for,” said Jorgensen. “I was struggling a bit with my focus as Marc had an injury in the first game. It was a long break and I had to stay in the game. I’ve played Marc a lot of times, we know each other so well. It’s been a pleasure competing against him since I was young. He’s one of the guys I’ll remember when I’m an old man.”