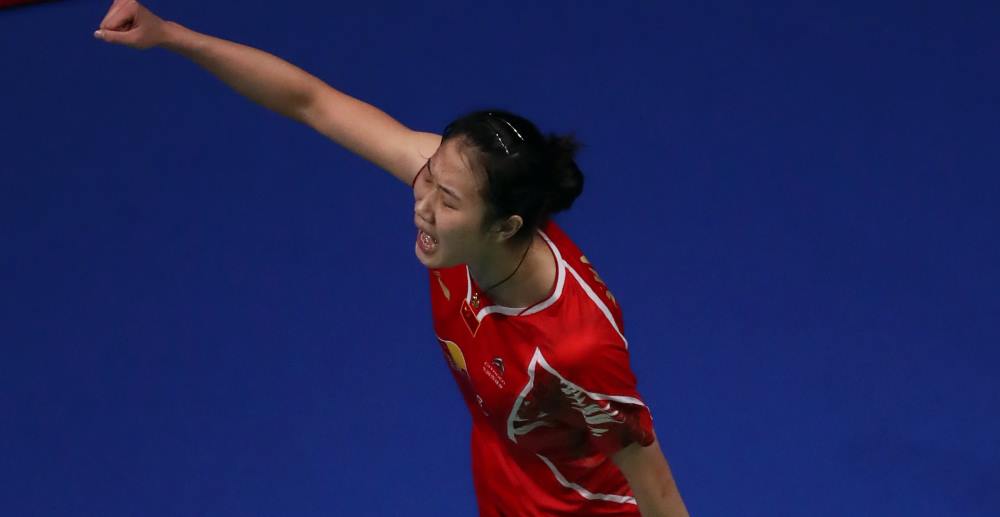 The Women’s Singles Group B match saw Spain’s Marin stage a thrilling comeback, saving eight match points before her Chinese opponent (featured image) regained her composure to close it out 21-18 24-22.

For most of the match, Marin was a shadow of herself as she plunged deeper and deeper in trouble against the big-hitting Sun. Unable to string a sequence of points and committing numerous errors, the Spaniard appeared to have given up the chase as she trailed 13-20 in the second.

A change came over her at this point. Marin was suddenly her old combative self once again, bursting with energy and hustling Sun into errors. The deficit disappeared in a jiffy as Marin ran up a sequence of eight straight points with a spell of high intensity to be on the verge of equalling the match.

Sun stemmed the breach with a 346 kph smash, and even though Marin saved another match point, the Chinese had the momentum once again on her side, winning the match after Marin sent a shuttle long.

“I had very little rest after the Korea Masters as I rushed to the airport straight from the stadium,” said Sung, who won her home Grand Prix Gold title on Sunday. “I haven’t won a Superseries this year, so that’s motivation for me to do well here. Today was a good start. Hopefully I can continue to play at this level.”

The England pair were never threatened by Japan’s Kenta Kazuno/Ayane Kurihara, who appeared to be off-rhythm the entire match as they fell 21-15 21-9.

“We don’t feel the pressure of being defending champions,” said Gabrielle Adcock. “We know if we play as good as we can, we’ll do well. We had a good start today.”

“It wasn’t as easy as it seemed,” added her partner. “Even though we were ahead, we had to keep our concentration. There weren’t too many rallies; it was a bit tense. We’re happy with the good start. We play a couple of young Chinese pairs in this group. We’re looking forward to getting on court as it’s always a challenge to play them.”

Mixed Doubles saw Yonex All England winner Praveen Jordan and Debby Susanto upset their senior compatriots Tontowi Ahmad/Liliyana Natsir for the first time. The younger pair made it past the Olympic champions in Group A, 21-11 21-12. There was a prominent casualty in Men’s Doubles, with Denmark’s Mathias Boe and Carsten Mogensen withdrawing from the tournament before their opening match as Boe was suffering from an illness.