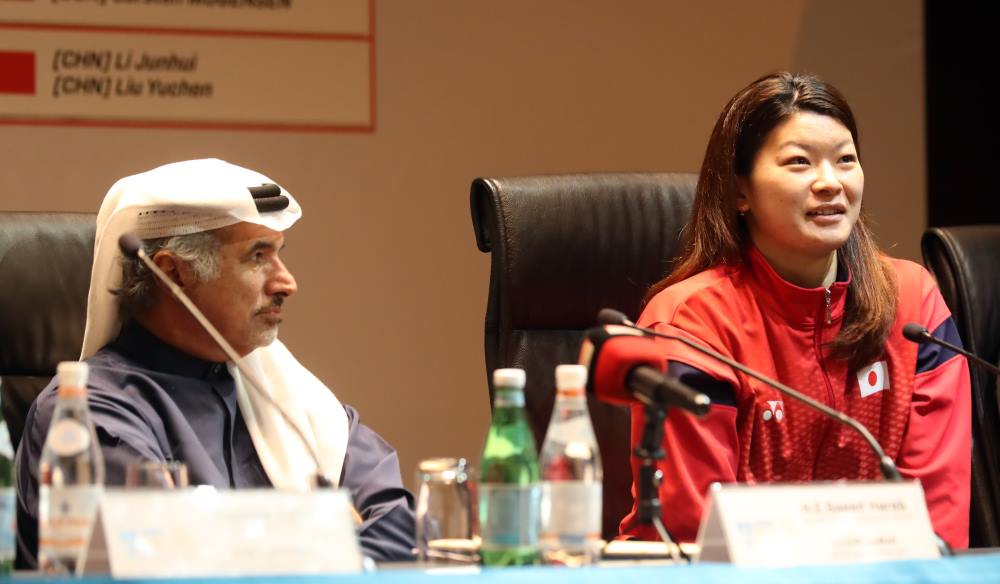 The Olympic gold medal might have been a dream achieved, but for Japan’s Ayaka Takahashi,

there are more milestones to reach, more crowns to be won.

Takahashi and Women’s Doubles partner Misaki Matsutomo had a stellar 2016 which saw them win four World Superseries titles apart from the Olympic gold. Still, there is no question of resting on their laurels, said Takahashi, as she promised that the pair would attempt to regain the Dubai World Superseries Finals title they won in 2014. “We won the Olympic gold, but we haven’t won the World Championships,” said Takahashi (featured image: right), at a players’ press conference following the draw held today. “We consider each tournament a challenge and we want to keep winning. Our coach has taught us that each tournament is like the Olympics, so we want to go for gold at every tournament.” The players’ quest for excellence was underlined by Indonesia’s Mixed Doubles great Liliyana Natsir, as she emphasised the importance of discipline in pursuing one’s goals.

“You need to control yourself, be disciplined… you have to eat well, rest well, and follow a good schedule. Only then can you be successful,” Natsir said.

The Indonesian asserted that she was keen to do well in Dubai: “After winning the gold in Rio, our mind is at ease. We’re enjoying the game now. We just finished playing in the National Championships. We hope to win the title here.”

Earlier, in his welcome speech, Thomas Lund complimented players who had qualified for the event, and local organisers who had ensured that badminton is now a part of the sporting landscape of the United Arab Emirates.

“Dubai and the United Arab Emirates in general have truly embraced badminton,” said Lund. “They have adopted our schools development programme, Shuttle Time; started tournaments in schools and clubs; held courses for coaches and technical officials; and have begun para-badminton training. Badminton is also now part of the Gulf Cooperation Council (GCC) Games… What we have collectively achieved is a shining example of how to establish and promote a sport in a world-class environment; from the grassroots to elite level. Congratulations on a job well done.”

HE Saeed Hareeb had words of praise for the event and for BWF: “We have over 400 events every year in Dubai. The Dubai World Superseries Finals is one of the best of the 400. This is a huge achievement for the tournament and organisers. This event is important for many reasons – we see some of the best players in Dubai; as a result, there is growth of badminton in the local community and at the grassroots level. We are proud to be working alongside you.”