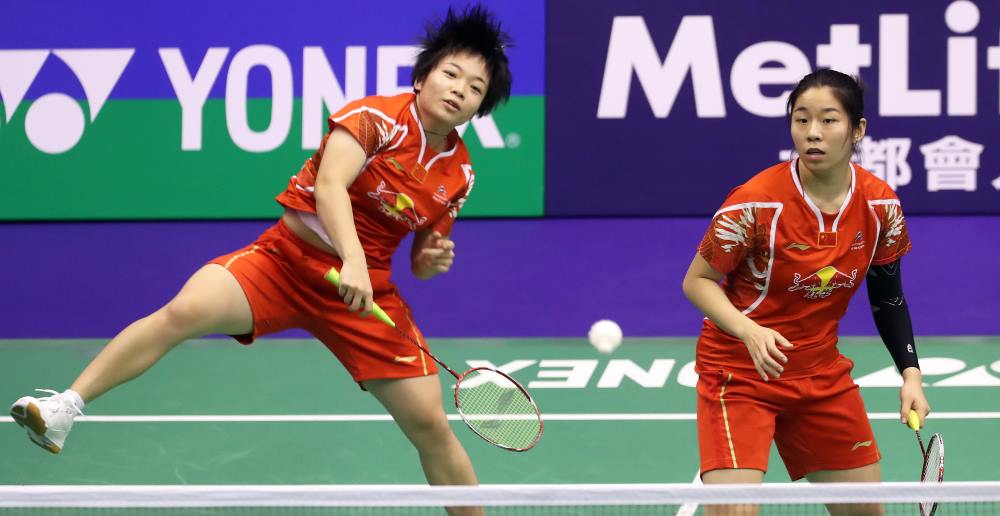 Chen Qingchen and Jia Yifan assured themselves of a first appearance at the Dubai World Superseries Finals by making the quarter-finals of the Yonex-Sunrise Hong Kong Open 2016 today.

The in-form Women’s Doubles pair (featured image) were in competition with Malaysia’s Vivian Hoo/Woon Khe Wei for the last remaining spot, but their defeat of compatriots Luo Ying/Luo Yu, and the Malaysians’ loss to Christinna Pedersen/Kamilla Rytter Juhl, meant that they would be invited to the year-ending finale. Hoo/Woon, just 1230 points behind Chen/Jia, had to win their second round against their Danish opponents to stay in contention for Dubai. They seemed on track after running away to a quick first game win, but then got increasingly ragged as the match wore on. Too erratic at important points, the Malaysians couldn’t quite stitch up the kind of game they needed to trouble the Danes, going down 10-21 21-11 21-9.

Chen and Jia will be up against Thaihot China Open champions Chang Ye Na/Lee So Hee in the quarter-finals. The Koreans had it rather easy against Indonesia’s Della Destiara Haris/Rosyita Eka Putri Sari, 21-18 21-16. India’s Saina Nehwal’s dream journey in Hong Kong continued, as she surpassed her own expectations with a dogged win over Japan’s Sayaka Sato. The victory means she and compatriot PV Sindhu are the two contenders left for the final Women’s Singles spot at the Dubai World Superseries Finals.

Nehwal had come to Hong Kong tentative about her fitness and form. Against Sato today, the Indian turned in a performance that might not have been pleasing aesthetically, but was high on courage and determination.

If Nehwal was worried about lasting the distance, she showed no sign on court that it was admittedly one of her toughest matches yet. At times it was Sato who doubled over in exhaustion after the rallies, while Nehwal readied herself quickly for the next point. The Japanese got to within a point at 12-13 in the third but Nehwal pushed on from there, closing out the match comfortably: 21-18 9-21 21-16.

“It was so tough,” Nehwal smiled, panting from the effort. “It was one of my toughest matches. I’m surprised, both Porntip (first round) and Sato are good attackers and good movers, I never thought I would beat them. I was happy I was moving better than yesterday. My movement is much better, although there’s still some pain. I didn’t imagine I’d play at this level after 2-1/2 months. I salute (physio) Heath Matthews. You need to be in good shape to beat players like Porntip and Sato.

“My approach to fitness has changed. It’s become easier now. I used to do much tougher sessions. My strength is good, but endurance is still low. Mentally, both my matches have been tough. It’s a tournament to test myself, I have no pressure.” It was a good day overall for India, with Nehwal and PV Sindhu (Women’s Singles) and Ajay Jayaram and Sameer Verma (Men’s Singles) progressing. The only casualty for them was the loss of HS Prannoy to Malaysia’s Chong Wei Feng.

Sindhu made her way past Chinese Taipei’s Hsu Ya Ching, 21-10 21-14. The two Indians are the remaining contenders for the last Dubai spot in Women’s Singles; if they both win the quarter-finals tomorrow, their semi-final clash would decide who makes the cut. In the other half, defending champion Carolina Marin (Spain) eased past local hope Yip Pui Yin, 21-18 21-16, earning a quarter-final against Japan’s Akane Yamaguchi.

Thaihot China Open champion Jan O Jorgensen was nearly shown the exit by Wei Nan. The local star led with the end in sight and got two match points after Jorgensen misjudged a toss. Yet the Dane held firm, and stayed confident at the death to take the match 19-21 21-13 24-22.

“It was really close. Tough game, no rhythm, no nothing,” mused Jorgensen. “Credit to this guy (Wei Nan)… very tricky player, he’s beaten Lee Chong Wei a few times, he’s very dangerous. I knew that he would give it all on his home ground. I’m not surprised at how the match went. I knew on one of the sides I would have difficulties to lift and he would come with his hard smashes. I’m very happy that I’m trying to stay focussed after last week. I just try to stay in the moment and do as well as I can.”