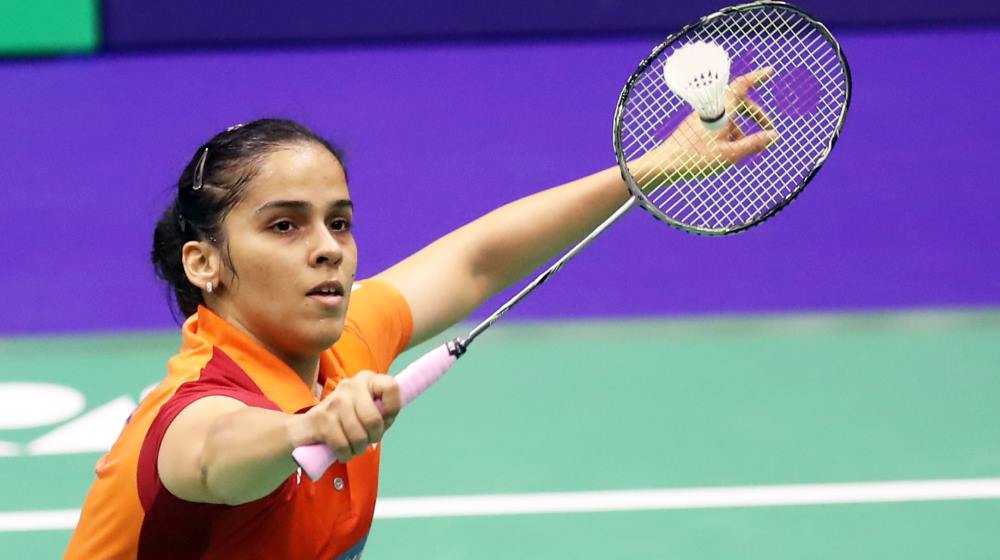 Saina Nehwal stayed in the hunt for a place at the Dubai World Superseries Finals with a hard-fought victory over Porntip Buranaprasertsuk today at the Yonex-Sunrise Hong Kong Open. The Women’s Singles opening round win over her Thai opponent ensured that the Indian still had a shot at clinching the last available place at the year-ending event in Dubai, which hosts eight of the best players and pairs in each category.

Importantly for Nehwal, her victory today was her first since coming back from a knee surgery for a problem that she picked up at the Rio Olympics. Nehwal had fallen to the same opponent last week at the Thaihot China Open.

It looked like an uphill battle for the former Hong Kong Open champion after she lost the opening game at 12, but she made her way back with her trademark doggedness, and by the third game her Thai opponent had fallen apart, 12-21 21-19 21-17. Nehwal is now in a dead heat with compatriot PV Sindhu and Japan’s Sayaka Sato for the Dubai spot. The other contender, Minatsu Mitani (Japan), ran up short against Chinese Taipei’s Tai Tzu Ying.

“It was too tough after coming back from surgery,” said Nehwal (featured image). “I had only four weeks to train. I just wanted to see where I stand. My endurance is still very low. It was very tiring.

“I lost to her last week but I have confidence (from past matches) that I’ve beaten her. The shuttles were slow this time — usually it is fast in Hong Kong — so there were many rallies. I didn’t expect to last so long. I did a lot of workouts on court the last week. I was struggling in the first game, maybe from now it will be better. My condition is not up to the mark.”

Nehwal wasn’t sure of her position with respect to her qualification chances in Dubai. “I didn’t check my Dubai standings. Hopefully I can make it, but for that I need to do well here.” In Men’s Doubles, Denmark’s Mathias Boe/Carsten Mogensen squeezed out of a tight spot to stay in the tournament. The Danes trailed all through the third game against Chinese Taipei’s Chen Hung Ling/Wang Chi-Lin, but their greater steadiness at the death saw them through 22-20 16-21 21-19.

The other two Danish pairs both lost to Malaysians. Kolding and Conrad-Petersen saved five match points in the second game against Ong Yew Sin/Teo Ee Yi but their challenge fell apart in the third: 21-19 22-24 21-18. Astrup/Rasmussen ran into Goh V Shem/Tan Wee Kiong, 21-14 21-15. Conrad-Petersen and Kolding are therefore safely through to Dubai despite their loss. Boe/Mogensen have to make the final to vault over Astrup/Rasmussen in the Destination Dubai Rankings.

Malaysia had a great day in the category with Lim Khim Wah/Ong Jian Guo packing off Yonex All England champions Vladimir Ivanov/Ivan Sozonov 23-21 21-11. The highlight of Men’s Doubles was a stunningly assured performance from young Japanese Yuta Watanabe. The 19-year-old combined brilliantly with senior partner Hiroyuki Endo to dismantle China’s Li Junhui/Liu Yuchen 27-25 21-17. Watanabe had a standout game, parrying everything that came his way and creating enough chances for his partner to kill. The Japanese have a second round appointment with Korea’s Choi Solgyu/Ko Sung Hyun.

Yet another veteran, Hu Yun (Hong Kong) made the second round, outwitting Germany’s Marc Zwiebler and keeping alive his slim chances of making it to Dubai. His compatriot Wong Wing Ki, who is slightly ahead of him on points, also made the second round. Hu’s Dubai hopes rest on him winning the title here, while Wong has to make the final.

India’s HS Prannoy avenged last week’s China Open loss to Qiao Bin. Unlike in his previous encounter, which saw Qiao use his bludgeoning smash to great effect, the Chinese was given little to work with, and the Indian was well prepared for Qiao’s best shot.

“The match he played with Iskandar (in China) gave me confidence. Iskandar was patient. Qiao banks on a couple of things which he is strong at, but if you’re ready for it, he goes down. A couple of things that eventually sets up the smash for him. He hits nearly 80 percent to the forehand. He also has only two receiving options. I wasn’t calm in China. Today I was calm, I was able to reach the shuttle high at the net. I could take most of his crosscourt smashes. I also held my shots, and he didn’t like that. Every time he caught up with me, I was able to pull away.”