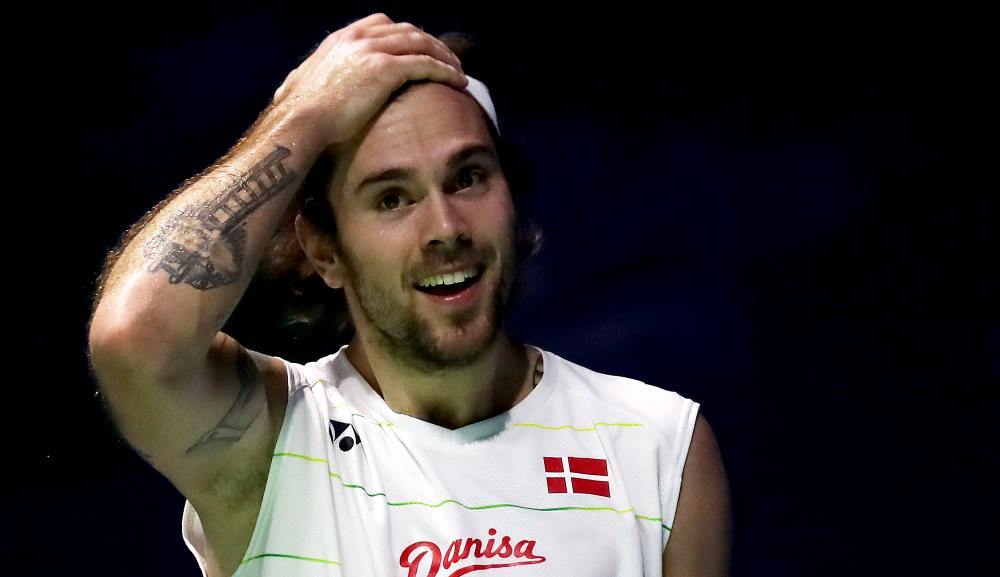 A much-envied record was finally broken in the 30th year of the Thaihot China Open – the home team failed, for the first time ever, to win a title. It was a first World Superseries title for India’s Sindhu, while for Jorgensen, the title was his first in over 28 months.

“I’m a bit in shock,” said Jorgensen (featured image), after completing the 22-20 21-13 Men’s Singles victory over Olympic champion Chen Long. “It’s one of the most difficult events to win, it’s a legendary tournament. My preparation was very limited. I’m just super proud.”

The Dane’s demeanour throughout the match suggested a man always in control. The testing period came when Chen saved three game points, but Jorgensen showed no hint of frustration and pocketed the next two points for the first game.

Chen, famously steady under pressure, wasn’t quite in his element today. Jorgensen was sharp and unrelenting; the Chinese, rather uncharacteristically, wilted under the pressure.

“I was in the final in 2009 – to come back and win is a big achievement,” added Jorgensen, who became the first European singles winner of the event. “It’s always an honour to play a great player like Chen Long. He’s very tough, very stable. You need to be your best. I was very calm and focussed. Maybe as he was coming after winning the Olympics he wasn’t his best, but that’s credit to me.”

“My (physical) condition wasn’t bad,” said Chen, offering no excuses. “I tried my best, but Jorgensen was better than me today. He was very focussed, and technically very strong in the front court.”

Sindhu Does a Saina To the question – ‘After Rio, what next?’ – PV Sindhu delivered the answer. A first World Superseries title, and that too, a Superseries Premier.

“It has been a dream for a long time to win a Superseries,” Sindhu said. “After the Olympics, everyone was asking me: ‘what’s next?’ It was important for me to get a Superseries title. Life changed a lot after the Olympics. People thought I would take a long time to get back, but I worked hard.”

Sun Yu raised the crowd’s hopes with a strong second game performance, staying on track to defend China’s enviable record on home territory. The Chinese have won all but three Women’s Singles titles since 1986.

The effort took its toll, for by the third game the Chinese looked out of it. The errors started to build, and her opponent was unmerciful.

The result will see Sindhu jump a few places from her current place of 14 on the Destination Dubai Rankings.

“It’s always been my ambition to qualify to the Dubai World Superseries Finals,” said the Indian. “I’m hoping to make the top eight after winning in China. I’m hoping my best is yet to come.”

A 25-year streak came to an end as China lost their Women’s Doubles supremacy at the China Open for the first time since 1991.

It was the unheralded pair of Chang Ye Na and Lee So Hee that did the damage, quelling young Chinese pair Li Yinhui and Huang Dongping in three close games: 13-21 21-14 21-17. Fought on even terms, and featuring the jump-smashing home pair against the sturdy Korean defence, the final swung Korea’s way from midway in the third. “We’re thrilled with this result – we had never won a Superseries before this in two finals,” said Chang Ye Na. “We have had a good run lately – we were in the final of the Yonex French Open – and our combination has grown over time. We analysed our loss in Paris and we applied those lessons here. Of course we didn’t know about China’s record here, but it feels good to be the ones to break the sequence.”

Kevin Sanjaya Sukamuljo and Marcus Fernaldi Gideon jabbed and weaved their way past Denmark’s big-swinging Mathias Boe and Carsten Mogensen, 21-18 22-20, for their third Superseries title of the year.

If Gideon was the workhorse in the deep, Sukamuljo was the bee in the bonnet for the Danes, buzzing incessantly at the net and stinging them with his intuition and unusual angles. His outrageous forays to the net in the face of blistering fire from the other end was the feature of the day, cramping up the Danes and disallowing them any freedom or rhythm. “They tried to slow us down,” said Gideon. “The shuttle is slow and it’s hard to attack and kill it, so we had to be patient. We’re very happy with our year so far – this is our third Superseries title. We’ve also won a Grand Prix Gold. Last year we were able to win only one tournament. Many top players have retired following the Olympics, so it’s a good opportunity now for younger players like us. I’m looking forward to Dubai – we’ve never been there and we hope to do well.” The year got sweeter for Tontowi Ahmad and Liliyana Natsir. Following up on their gold medal at the Rio Olympics, the Indonesian duo beat familiar foe Zhang Nan and his new partner Li Yinhui for the Mixed Doubles title:  21-13 22-24 21-16.

Li showed remarkable composure despite being in the finals for the first time. The 19-year-old kept her ground, helping Zhang save two match points in the second and forcing a decider. But the Indonesians were far too experienced and astute, and the third game was never in doubt.

“We haven’t had much preparation after the Olympics,” said Ahmad. “We didn’t have very high expectations when we got here, we just wanted to play our best and see how it goes. We’ve been very confident since winning the gold and that made the difference.”