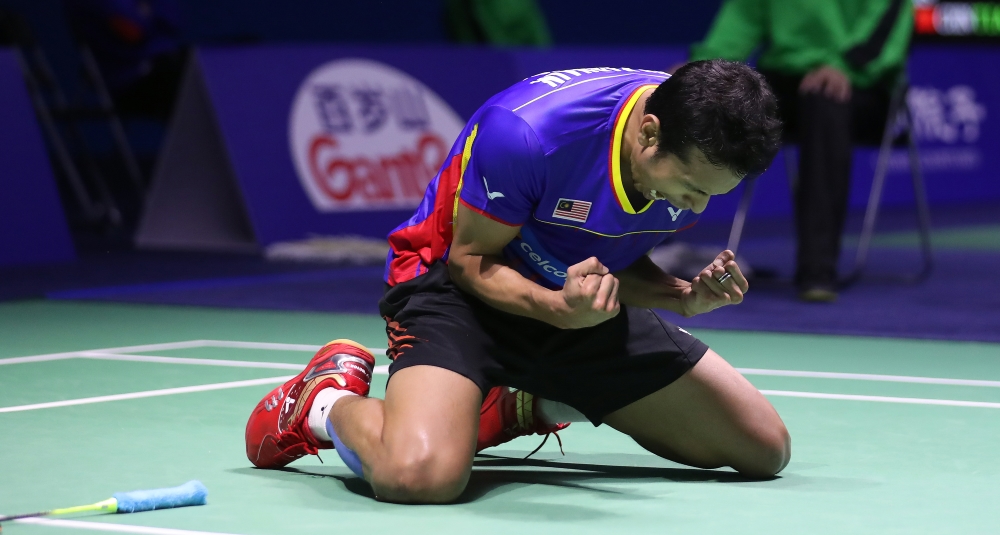 The Malaysian, leading the Men’s Singles challenge for his country in the absence of Lee Chong Wei, stormed past his Chinese opponent 21-19 21-7, barely putting a foot wrong through the 45-minute encounter. Qiao, who had bludgeoned his way past India’s HS Prannoy in the second round, found his heavy smashes returned by the Malaysian, and after he lost a close first game, appeared to run out of ideas.

“It is my first Superseries semi-finals and I’m very happy,” said Zulkarnain (featured image), who will play Denmark’s Jan O Jorgensen for a place in the final. “I really wanted to do well here. I would have met Lee Chong Wei in the second round, (but his withdrawal) gave me my big chance. I had to take this chance to improve my confidence.

“My family came to the airport to see me off and to wish me luck. That gave me confidence. I’ve lost in the first or second round of a few Superseries this year, so this tournament was important for me. I’d played him (Qiao Bin) in Korea, so I know how he plays. I had a good feeling throughout.” The crucial phase for Sindhu was at the end of the first, when she saved game point and snatched the game. He Bingjiao’s level quickly dipped, and Sindhu was able to stamp out any resistance.

“The first game was crucial,” said Sindhu. “This was similar to our last match. At the French Open I was leading 20-18 and lost it 22-20. She’s the kind of player that can come back at any time, so even though I had a big lead in the second, I did not relax. I was just focussed on playing a safe game, there was no particular strategy, since things can change suddenly.” Denmark had mixed luck on the day. While two pairs – Mathias Boe/Carsten Mogensen (Men’s Doubles) and Christinna Pedersen/Kamilla Rytter Juhl (Women’s Doubles) joined singles stars Jorgensen and Axelsen in the semi-finals, two other pairs had their chances but couldn’t grab them.

Kim Astrup/Anders Skaarup Rasmussen had everything going for them against China’s Zhang Nan/Liu Cheng. With a 19-14 lead in the third, the Danes had a foot in the semi-final, but succumbed to nerves at the very end.

“I don’t have a clue about what happened,” rued Astrup. “We were dominating the third set almost till the end. So disappointed we couldn’t close it. Of course it was nerves. I hadn’t made a return error the whole match and I made two in the end. We fought with everything we had. We had given our heart and soul the whole way.” While the day turned out badly for Astrup and Sorensen, it couldn’t have gone better for Zhang Nan. The doubles virtuoso returned for Mixed Doubles with new partner Li Yinhui and the pair ambushed in-form compatriots Zheng Siwei/Chen Qingchen 18-21 22-20 21-17. Li Yinhui also had a successful day, making the Women’s Doubles semi-finals with Huang Dongping.

Two Chinese pairs made the Women’s Doubles semi-finals. Li and Huang decimated the challenge of Bulgaria’s Gabriela Stoeva/Stefani Stoeva 21-16 21-10, but compatriots Luo Ying/Luo Yu had a harder time getting past Japan’s Shizuka Matsuo/Mami Naito. The mental focus of both pairs was tested, with the Japanese as usual relying on their tight defence to force the Luos into long rallies. The Chinese broke away early in the third and kept a handy lead to eventually seal the match 13-21 21-12 21-16 in 87 minutes.