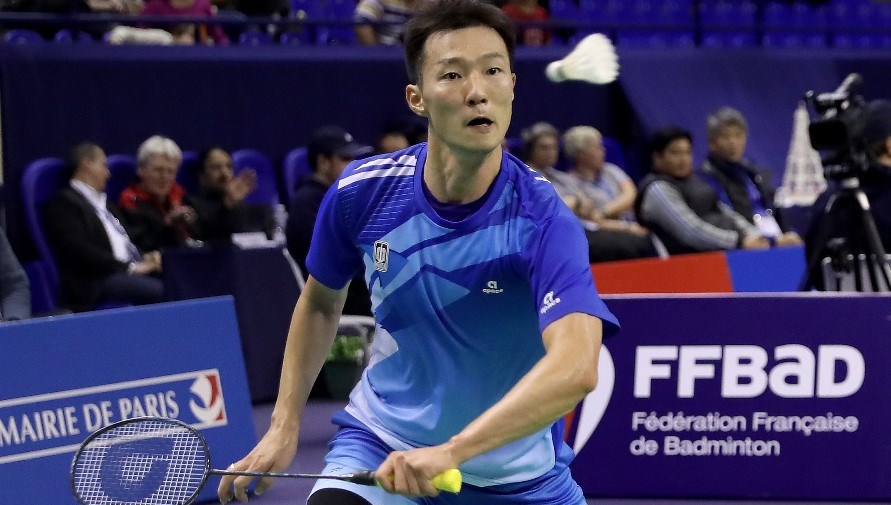 Halloween came early for Viktor Axelsen tonight as the recurring nightmare – where he is cut down by Lee Hyun Il – unfolded for the second successive week on the MetLife BWF World Superseries tour.

Having succumbed to the Korean veteran exactly a week ago in Denmark, the imposing 22-year-old was hoping fate would be kinder in his second round at the Yonex French Open 2016 – but it wasn’t.

In fact, it was worse as Lee (featured image) swept aside the Danish No.2 seed in straight games – as opposed to going the distance in Odense – and Axelsen squandered two opportunities to grab the opening game. That clearly rattled him and he never settled into game two, spraying several shots wide or finding the net, as Lee applied the last rites: 22-20 21-12 on centre court at Stade Pierre de Coubertin.

“I am disappointed. Lee Hyun Il played really well but I’m not satisfied with how I played. The last two weeks haven’t been good,” said Axelsen bluntly.

A cool and calm Lee felt the outcome was influenced significantly by who got the upper hand.

“I think winning the first game was the key. It was a psychological advantage and I was able to control the match after that,” he elaborated.

At 20-18 up, it looked like Axelsen was going to race ahead but his misjudgement of a shuttle that nestled on the baseline proved costly as it levelled the scores 20-20. Lee seized the momentum with a body shot that was unreturned followed by a smash at net. The second game was a blur from Axelsen’s perspective. He didn’t seem to have a plan and constantly fell into Lee’s well-woven traps, providing easy kills for the 36-year-old dictating
the proceedings.

Match point came off another Axelsen error – a heavy smash into the net – and the world No.5’s head hung low as he trudged forward to greet his ‘grim reaper’. Elsewhere, his Danish counterparts, Jan Jorgensen and Hans-Kristian Vittinghus, had differing results, with the latter perishing to Hong Kong’s Ng Ka Long (21-21 21-19) while Jorgensen outplayed Indonesian youngster, Anthony Ginting, 22-20 21-15.

“We kept calm and got our attacking rhythm going early. We put the Danes under pressure and they didn’t play as well as they usually do,” said Ahsan, adding that he and Angriawan are more settled than their first outing in Denmark last week. Indonesia is assured of a semi-final place as Ahsan/Angriawan will face their team-mates, Angga Pratama and Ricky Karanda Suwardi, in tomorrow’s quarter-finals. However, No.5 seeds Marcus Fernaldi Gideon and Kevin Sanjaya Sukamuljo – who have hit a bad patch – will be watching from the stands as they fell to 19-21 21-16 21-14 to Chinese Taipei’s Lee Jhe-Huei and Lee Yang.

In the Chinese camp, their young guns continued marching into badminton’s limelight, upstaging more seasoned compatriots. In Women’s Doubles, Chen Qingchen/Jia Yifan beat the No.5 seeds, Luo Ying and Luo Yu, 21-18 21-15. Shi Yuqi romped into the Men’s Singles quarter-finals at the expense of his comrade and No.4 seed, Tian Houwei, 21-13 10-21 21-10. Chen and Zheng Siwei also advanced in Mixed Doubles. “I am very excited. I had to change my tactics because she is a good defensive player. I tried to beat her with smashes in the first game. In the second, I changed to playing long rallies and it worked,” said 20-year-old, keen to progress to the semi-finals. Christinna Pedersen also had a good day on court, blazing into the last eight of Women’s Doubles (with Kamilla Rytter Juhl) and Mixed Doubles (with Joachim Fischer Nielsen). There were some testing moments in the second game of the all-women’s match as Thailand’s Puttita Supajirakul/Sapsiree Taerattanachai led 15-12. However, they ultimately crumbled 21-14 21-19.

“We prepared well for this match,” said Pedersen who combined with Fischer Nielsen to beat Netherlands duo, Robin Tabeling and Cheryl Seinen.

“We saw the Thai girls and their good performance in Denmark last week and we have been looking forward to this.

“The first game was easier than expected but in the second we were struggling to find our best game. So we are happy we won in straight games.”