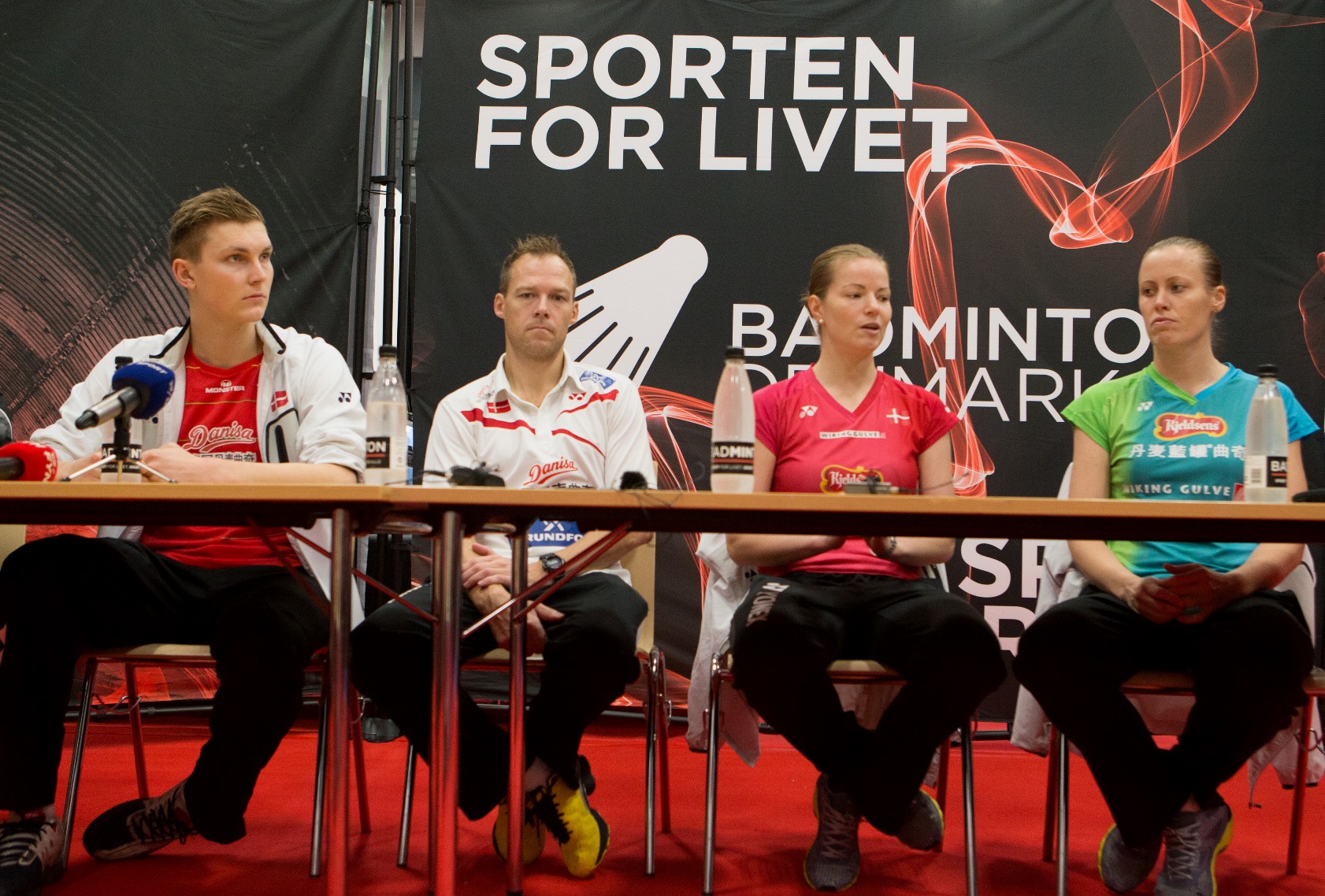 They are great with shuttles and rackets but, since Rio 2016, Kamilla Rytter Juhl, Christinna Pedersen and Viktor Axelsen have been trying to master the art of juggling.

Already well-known professionals, these Danish athletes have been thrust further into the spotlight thanks to their achievements at the Olympic Games and are grappling with increasing demands on their time, while trying to get back into their training and playing routines.

The past two months have been more challenging than they imagined and, on the eve of the Yonex Denmark Open, Axelsen admitted it has been “stressful” coming to terms with the aftermath of being an Olympic medallist.

“This was my first Olympics and I found it stressful – before, during and after. I felt emotions which I am not used to,” revealed the Rio 2016 Men’s Singles bronze medallist at a press conference today (featured image).

“I am trying to refocus on my training and it can be frustrating when I am not able to live up to my expectations.”

Despite losing in the quarter-finals of last month’s Yonex Open Japan and opting out of the Victor Korea Open to rest more, the 22-year-old appreciates all the lights, cameras and action around him are just rewards for his hard work.

“When you do well, there are a lot of exciting opportunities and it’s about managing these situations while still wanting to train and do things which I am used to doing.” His senior team-mates – Rytter Juhl and Pedersen – have more experience handling sporting success, but even this seasoned Women’s Doubles pair was stunned by the response of their Danish compatriots to their silver-medal heroics in Brazil – and how tough it has been to settle back into normal life.

“We have had an amazing time after Rio. I never imagined it would be like this, with all the attention and congratulations. It has been a lot. We feel like almost like every Dane watched our matches.

“People recognise us out in public, even when we are not in our playing gear. It has been very special,” said Rytter Juhl, speaking on the two-month anniversary of the Rio 2016 Women’s Doubles final. Her 30-year-old partner noted “it has been a very busy time off the court” and their training has not been as intensive.

“We took a week off to celebrate with our families and friends, Badminton Denmark, our sponsors,” added Pedersen.

“When we got back on the court, we were very tired. Rio was extremely tough – both mentally and physically – and we felt we were not at our high level afterwards. It was stressful.”

Therefore, the world No.4 duo surprised even themselves with strong back-to-back performances upon the resumption of the MetLife BWF World Superseries; beating Olympic champions Misaki Matsutomo and Ayaka Takahashi in the Tokyo final and reaching the Korea semi-finals the following weekend.

“It was special to win in Japan. We were very aware of the challenge to perform well after Rio and we didn’t want to feel sorry for ourselves. We needed to be tough and fight all the way,” stated Rytter Juhl who turns 33 next month.

“We were very proud to beat the Luo twins in the semi-final and then winning the Japan final –a rematch of the Olympic final – was great.” As they prepare for one of the annual highlights of their season – the chance to shine in front their family and friends – they accept that they are not at their peak…but they refuse to worry about it.

“We have been talking to our coach about how to handle this – that our training is not as high as usual. We can’t do anything about it so we will just focus on this event in Denmark and not think about France next week or any of the other tournaments,” declared Pedersen.

Axelsen – who has enjoyed a stellar year with Thomas Cup glory followed by a hard-fought, three-game thriller for Olympic bronze versus China’s two-time Olympic champion, Lin Dan – is similarly motivated as his hometown, Odense, hosts the Superseries Premier event. Add to that, the niggling fact that he is yet to win on the Superseries circuit and it’s understandable why the affable player may feel some pressure.

“I hope it happens soon. I am confident that once I focus on training it will come,” he said, adding it will be critical to play to his potential if he hopes to win on home turf. Meanwhile, Kenneth Jonassen – who is taking over the reins as Badminton Denmark’s new Chief Head Coach – is doing his best to help his charges adjust.

“I realise they have changed a bit and they have been tired at practice. Their everyday lives are different and my job is to get them to focus and to be able to do what they enjoy doing – performing well and getting good results.”

The former Men’s Singles athlete says giving the star players “new goals” to which to aspire, while dealing with the expectations they face both on and off court, is his priority.

Amid the buzz around them, Jonassen also gently reminds them this experience is “natural and healthy” and should ultimately be relished.

After all, he highlighted: “It has happened for very good reason – because of their outstanding performances in Rio.”