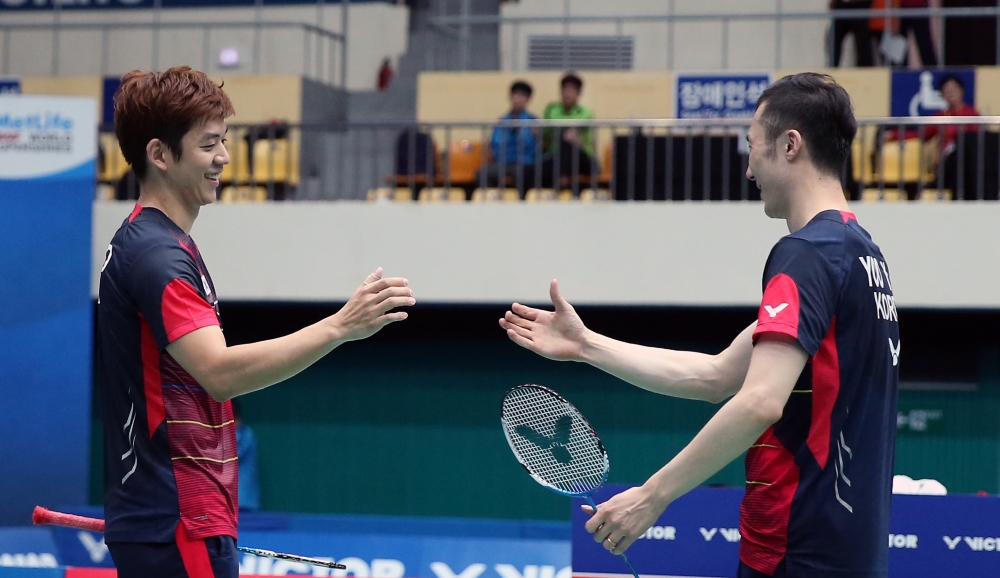 Lee and Yoo came on top after a nervous 85-minute thriller against China’s Li Junhui and Liu Yuchen, 16-21 22-20 21-18. The 43rd title makes him the second most successful player at the Superseries level after Malaysia’s Lee Chong Wei.

It wasn’t a final Lee might care to relive. Both he and Yoo (featured image) looked a bundle of nerves, uneasily pacing the court between points, asking for frequent shuttle changes, and receiving a few warnings from the umpire for taking too long to get ready. Their famed defence was nowhere on display; the attack was blunted both by inconsistency and the ability of the Chinese to anticipate correctly. With Li and Liu hammering everything that was lifted up, the Koreans chose to play the shuttle around and wait for the opening. Eventually, it was only well into the decider that the home pair came into their own, gaining confidence with an authoritative point to go 10-7 up. Lee, who had smashed down the middle all through the match, changed his line and the shift paid immediate rewards. The Koreans racked up a sequence of points to build a cushion, and even though Li and Liu refused to let go, the title was won on the third match point.

“Today was such a difficult match and it was really great to play in front of so many fans,” said Lee Yong Dae.  “We were under pressure in the opening game but we were able to work it out and going into the third game, we had the confidence that we would be able to win it.

“This is my last match in international badminton and I am so happy to have won.  In a match like today, when we were on the verge of losing in the second game, a lot of thoughts went through my mind and I thought of how disappointing it would be to lose like that.  With so many people having come to the hall to watch the match, I really felt like I could not give up and that was how I was able to fight hard to the end and turn around a tough match.”

Lee’s partner Yoo thanked him for the memories: “Thanks for your understanding. Take your time and relax before your next step.” Ko and Kim were on the button from the start and didn’t let go. It was a tactically astute performance, preventing Zheng and Chen from exerting their influence. While Kim was sharp at the net, it was Ko who stepped up to the occasion, flying all around the court and unleashing his powerful crosscourt drives from vulnerable positions to surprise the Chinese. The Koreans kept their composure in a tight second game to close out the match 21-14 21-19.

“I’m so happy we won here,” said Ko Sung Hyun. “We lost to them at the Yonex Open Japan last week, so we’re thrilled to beat them here. I feel so proud. “After we lost in the Olympics, I tried to keep up my motivation as the Olympics is not the final goal of my career. We had to justify our No.1 position and I felt I had to take the responsibility. Kim Ha Na played very well; our defence was quite good today. We were able to hurry them up and force mistakes from their side.”

After Korea had completed the first two instalments of their possible sweep, Sung had her chances for making it 3-0. A picture of fluid movement, Sung was at her balletic best – moving unhurriedly and composing shots whose trajectories drew graceful lines and found the far corners to the desperate Yamaguchi. With a lead into the final stretch, Sung looked set to retain her title.

The Korean was broken out of her spell by Yamaguchi’s indefatigable retrievals. Darting from corner to corner, Yamaguchi forced Sung into extra shots after near-certain winners. The Japanese’s stubborn resistance bore fruit, and she picked up her first Superseries title in three years with the 20-22 21-15 21-18 result in 74 minutes.

“I’m glad to win my first Superseries after the Yonex Open Japan in 2013,” said Yamaguchi. “But winning here is not everything; it is part of a process. I would like to keep up the level of my performance and continue to do well.” The bludgeoning racket of Qiao Bin blew apart Son Wan Ho’s dreams of a first Korea Open title. The 23-year-old’s heavy artillery from deep in his court created all the openings he needed, keeping away a resurgent opponent in the second game to power ahead in the home stretch: 21-11 21-23 21-7.

Son was able to settle in with his nagging accuracy and consistent game after a blistering first game from his opponent. With the second game in hand, Son would’ve hoped for a strong start in the decider; the game slipped away in a trice. Unlucky on a few counts at the net, the Korean had to stage a rearguard action; Qiao however was under no pressure and continued to press on with his high-intensity style until Son’s resistance collapsed in a heap.

“I’m so thrilled; I have no words to express my feelings,” said the new Superseries champion. “Of course this is my first Superseries, I’m so happy. I have learnt my game by watching many of my seniors. First of all, I should mention Lin Dan and Chen Long as my models.” Olympic bronze medallists Jung Kyung Eun and Shin Seung Chan repeated their Rio display over China’s Luo Ying and Luo Yu, blazing past their opponents 21-13 21-11. The Chinese had no answers to the sheer power of Shin and the deft placements of Jung.  At no stage did they look remotely threatened, and the coup de grâce was delivered with a minimum of fuss.

“We were just trying to enjoy the game today so we didn’t feel any pressure,” said Shin. “I think the Chinese looked tense today; I’m not sure why.”