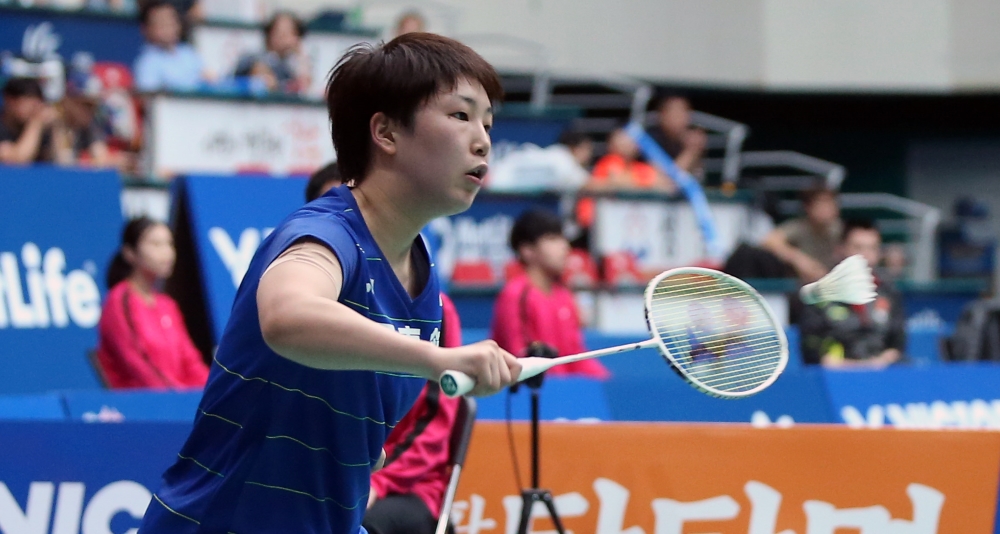 Korea gave themselves a chance of a first-ever sweep at their home World Superseries event after winning all their semi-final matches at the Victor Korea Open today.

However, Korea will have to overcome some of China’s best young talent in four categories if they are to realise their hopes. Japan is the only other country that will feature on finals day, with Akane Yamaguchi entering the Women’s Singles title round against defending champion Sung Ji Hyun.

Men’s Doubles great Lee Yong Dae and partner Yoo Yeon Seong set up an intriguing last day for home fans. If the top seeds win the final, it will mean a 43rd Superseries for Korean icon Lee on his last day in international badminton, making him the second most successful Superseries player after Malaysia’s Lee Chong Wei.

Lee and Yoo were often erratic today against China’s Wang Yilyu/Huang Kaixiang, but had enough in reserve to coast past their opponents, 21-11 21-16.

The Koreans have a stiff task on their hands, as they face in-form Li Junhui/Liu Yuchen, who made their second Superseries final in two weeks. The Chinese, champions at last week’s Yonex Open Japan, took their time to get going against Malaysia’s Goh V Shem/Tan Wee Kiong, but shot ahead in the end, 18-21 21-15 21-13. Men’s Singles sixth seed Son, pitted against the masterly craft of Lee Hyun Il, succumbed to the veteran’s spell in the second game. Lee had the shuttle on a leash and guided it where he willed; Son was caught in the sticky pace dictated by the older player and an upset loomed large.

But the younger man did break the shackles with some extra effort, managing to extract a few wayward shots from Lee. Once he had his lead early in the third, the confidence grew, and Son closed it out 21-13 14-21 21-10. The result means Son will be in contention for his first Superseries title since the Hong Kong Open in November 2014.

“I’ve learnt a lot from watching Lee Hyun Il,” said Son. “I was nervous going into the match as it would have been embarrassing to lose to him today.”

Son will face Qiao Bin, one of the new generation of Chinese shuttlers who have been creating ripples at the senior level. Qiao survived a stiff test from Hong Kong’s Wong Wing Ki in the opening game and the momentum shifted his way as Wong, who survived a long quarter-final yesterday, couldn’t quite draw deep enough. “He was quicker than me today,” said Wong. “I think my long quarter-final against Tian Houwei yesterday made me slightly slower. If I had taken the first game it could’ve gone either way.”

Among the new generation that has already created an impact are China’s Mixed Doubles pair Zheng Siwei and Chen Qingchen. The World Junior champions made their third Superseries final in a row – they were runners-up in Australia and champions last week in Japan – with a 21-16 21-18 result over Hong Kong’s Lee Chun Hei/Chau Hoi Wah. The final will see them face home pair Ko Sung Hyun/Kim Ha Na, who outplayed Malaysia’s Chan Peng Soon/Goh Liu Ying in three games, for their fourth victory in six matches.

Sung Ji Hyun made her second straight Korea Open final. There was little trouble from younger teammate Kim Hyo Min, with Sung wrapping it up 21-5 21-10.  Japan’s Akane Yamaguchi (featured image) will stand between her and her successful defence of the title; Yamaguchi having enjoyed a 31-minute win over compatriot Minatsu Mitani, 21-17 21-11. Olympic Women’s Doubles silver medallists Christinna Pedersen/Kamilla Rytter Juhl’s quest for a second straight Superseries title ran aground against the pair they beat last week in Japan – China’s Luo Ying and Luo Yu. It was even until early in the third, when Pedersen and Rytter Juhl suffered an uncharacteristic meltdown, losing 11 of 12 points to blow their chances. The Luos made their first Superseries final this year with the 21-15 17-21 21-12 result.