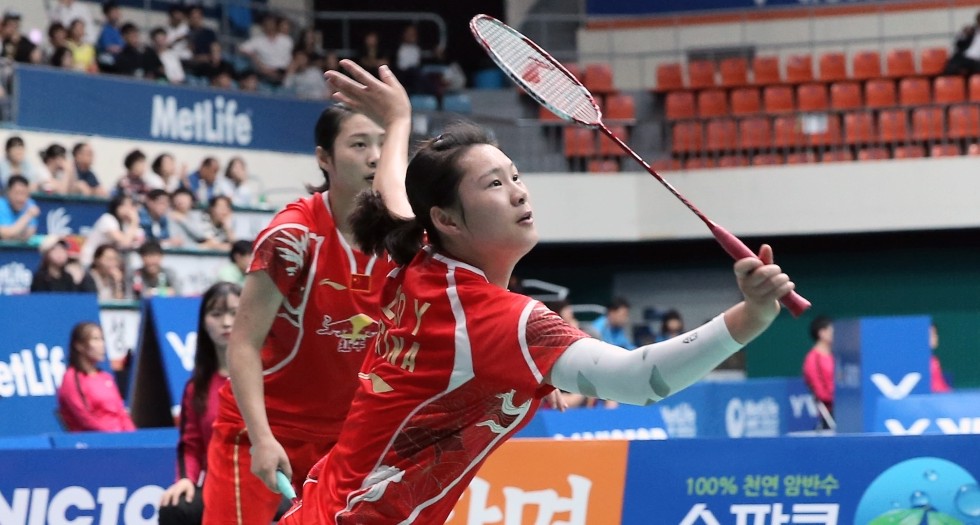 performance from 2013 at this event by beating China’s Tian Houwei today.

These have been the only two World Superseries semi-finals the Hong Kong player has made, and having outplayed No.4 seed Tian Houwei, he acknowledged that this has been a lucky event for him. Faced with an opponent who can play steadily over long periods, Wong came up with the goods, judiciously using bursts of speed and pinpoint attack to effect the breach in his opponent’s defence. The second game was even until Wong extracted a lift with a tight net shot and put away the smash; Tian faltered on the next rally to give him match point, which he duly converted: 21-18 21-17.

“I was in the semi-finals in the Korea Open in 2013, it’s quite amazing that I’ve done well in the same tournament,” said Wong. “Our style is a bit similar. I just had to play patiently. Towards the end I felt tired, and when I looked at him, he looked tired too. It was about the mind, about who was stronger, it wasn’t about technical ability. On the last few points he looked stressed. He gave me the chance to do what I had to do.”

Wong has had a good year, winning his first international title – the Vietnam Open GP – in July. He was also a semi-finalist at the Yonex Open Chinese Taipei.

“The Vietnam Open was my first international title,” said Wong. “It gave me a lot of confidence. After losing in the Yonex Open Japan to Viktor Axelsen, I got ready for this tournament. I hope I will play with more confidence tomorrow.”

The other semi-final features an all-Korea affair between Son Wan Ho and Lee Hyun Il – both had straight-games wins in their quarter-finals. Lee was masterful against India’s Ajay Jayaram, controlling the rallies with his fine sense of anticipation and placement of the shuttle. Women’s Singles defending champion Sung Ji Hyun repeated last year’s quarter-final victory over Chinese Taipei’s Tai Tzu Ying, 21-16 21-18. As with her last victory, it was a straight-games win, with Tai unable to string together a sequence of points to put pressure on the local favourite.

“It’s a good sign that I beat her this time too,” said Sung. “It’s tough every time I play her. I’ve been doing well in Korea, but I’ve been unable to get the desired results in the other big events. That’s something I have to overcome.” The Women’s Singles final will be a Japan versus Korea affair, as Sung’s compatriot Kim Hyo Min will face her in the last-four, while the bottom half will have Akane Yamaguchi against Minatsu Mitani.

In Men’s Doubles, Li Junhui and Liu Yuchen’s recent dominance over Indonesia’s Mohammad Ahsan/Hendra Setiawan continued, as the Chinese decimated them in under half-an-hour, 21-11 21-16, for their fourth straight win against the World champions.

“It was a difficult game, we’re just happy to win. There are many fans hoping for us to win the tournament and that’s a big source of motivation for us,” said Lee Yong Dae, who announced yesterday that this would be his last international event.

Olympic Mixed Doubles silver medallists Chan Peng Soon/Goh Liu Ying had a close shave against Denmark’s Anders Skaarup Rasmussen/Sara Thygesen. A short serve by Goh brought the Danes level at 19 in the third, but Goh made amends immediately after by showing great dynamism at the net and winning match point. The Malaysians earned the right to play familiar foes Ko Sung Hyun/Kim Ha Na (Korea) in the semi-finals with the 21-14 14-21 21-19 result. In Women’s Doubles, China’s Luo Ying/Luo Yu (featured image) overcame Bulgaria’s Stefani Stoeva/Gabriela Stoeva in a rare match between siblings on either side. The Luos will have to contend with Denmark’s Christinna Pedersen/Kamilla Rytter Juhl, who are in sight of their second straight Superseries title after winning in Japan. The other semi-final will be an all-Korea contest between Jung Kyung Eun/Shin Seung Chan and Chang Ye Na/Lee So Hee.