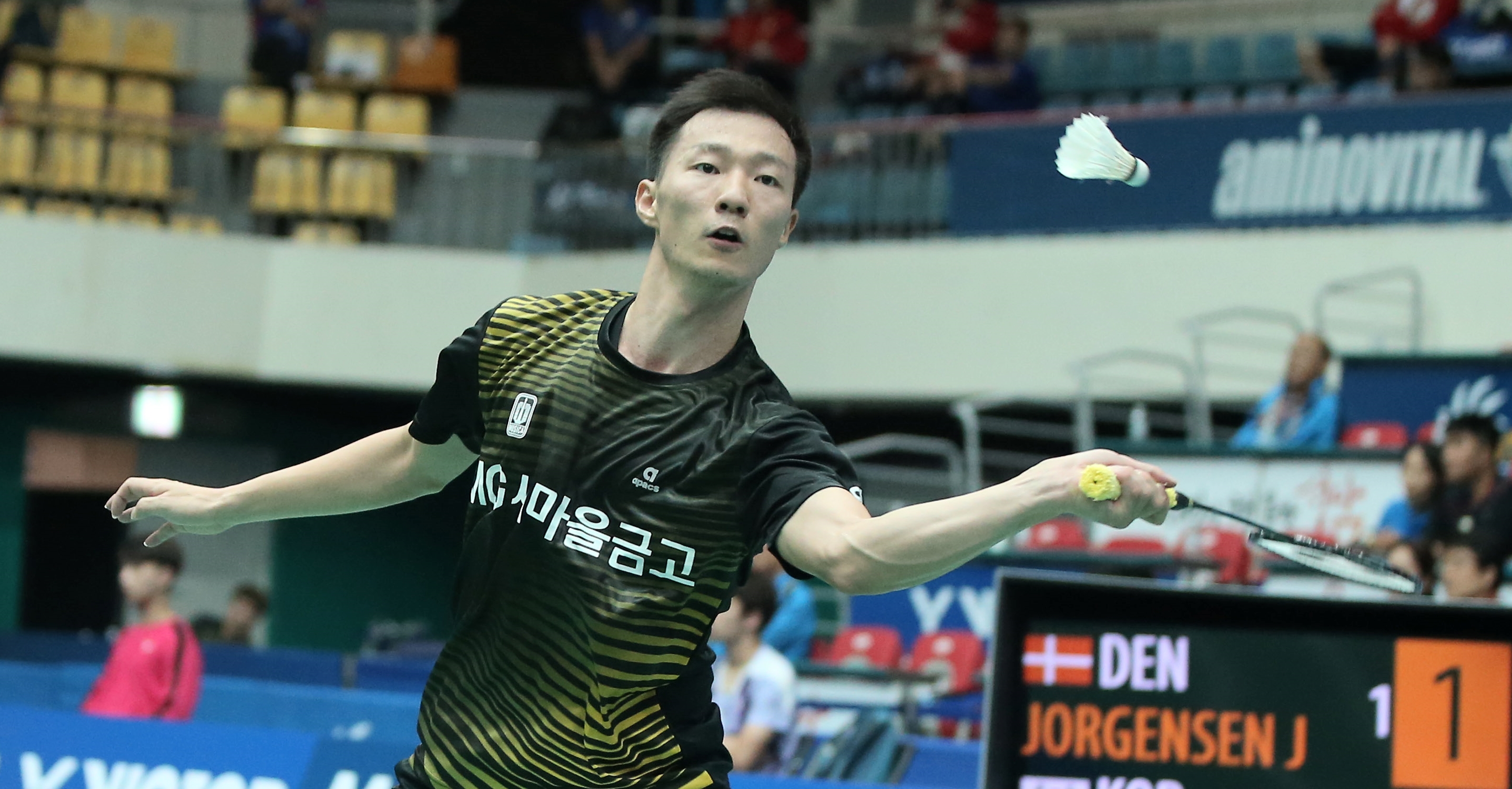 In a day of frenetic Men’s Singles action, local hero Lee, all of 36, was an oasis of calm as he eased to his third win in five matches over the Dane. Unhurried and elegant, the Korean was in the right place at the right time, coaxing the shuttle to various corners to force his opponent to do all the running. Hardly, if ever, in the hour-long encounter was there a moment of awkwardness, of being hurried into a shot. Despite losing a close first game, Lee was as calm as a monk, his demeanour giving nothing away as he kept a step ahead of Jorgensen. The interminable rallies started to hurt Jorgensen, and Lee wrapped up the proceedings 18-21 21-19 21-13.

Jorgensen said an old hip injury from the Thomas Cup had flared up again in the second game, but he gave full credit to his opponent.

Lee, who is a professional player, said his work ethic was seeing him through the competition from younger players: “When I was in the national team, it was easier because we had to stick to team schedules. But when I became a professional, I have to ensure that I’m motivated enough to do all my workouts and stay fit. I’m careful to maintain my muscle strength. I also have to play smart and control the shuttle. I can feel I’m losing my strength a little, but as long as I can maintain my fitness, I can take on players of this level.”

Lee will play India’s Ajay Jayaram, who made his first Superseries quarter-finals after a year. Jayaram, runner-up at the Victor Korea Open last year, grabbed his chances against China’s Huang Yuxiang, 21-15 21-18.

“It feels good… it’s been a while since I was in the Superseries quarter-finals. I lost in a few first rounds, I had less practice due to the number of tournaments and my fitness lagged and that showed. Post the Olympics, I got a good break to train hard. After the qualification period, it’s been much better, with good hard training to get my fitness back,” said Jayaram. The third seed in Women’s Singles, Ratchanok Intanon, followed Jorgensen out of the tournament. Intanon lost the plot to China’s Chen Yufei, 21-17 21-17.

Yonex Japan Open champion He Bingjiao (China) was also a second round casualty, at the hands of Japan’s Minatsu Mitani.

Mitani showed plenty of character as she fought off a first-game deficit against her opponent. The Japanese had terrible luck in the opening game, with several of He Bingjiao’s shots dropping off the tape or landing on the lines. Nevertheless, Mitani soldiered on in her characteristic fashion, chasing each shuttle and driving Bingjiao to desperation. Mitani frequently looked crestfallen but there was no evidence of that in the rallies, and her opponent started to waver before her retrieving skills. Mitani booked her quarter-final place against Chen Yufei with the 18-21 21-19 21-16 result. Asked if the results they’ve had in Mixed Doubles (they beat Tontowi Ahmad/Liliyana Natsir in Indonesia) might make them take the category more seriously, Kjaersfeldt said they were still focussed on their main categories.

“I don’t know… maybe in the future. I’m focussing on singles and he’s focussing on Men’s Doubles and then we’re just having some fun with Mixed Doubles sometimes. When I was younger I also played doubles and my trainer taught me tactical things in doubles, so it’s in my head and I can just go and play.”

“Line’s has strong movement because of her singles; normally the man just plays at the back in Mixed Doubles, but here I can move front,” said Astrup. “Of course when we are on court, we will do everything to win. It’s a good mental thing to go to court and relax because it isn’t a life-and-death thing like in her singles and my Men’s Doubles. So we’re more calm and maybe that’s why we play some good matches sometimes.”