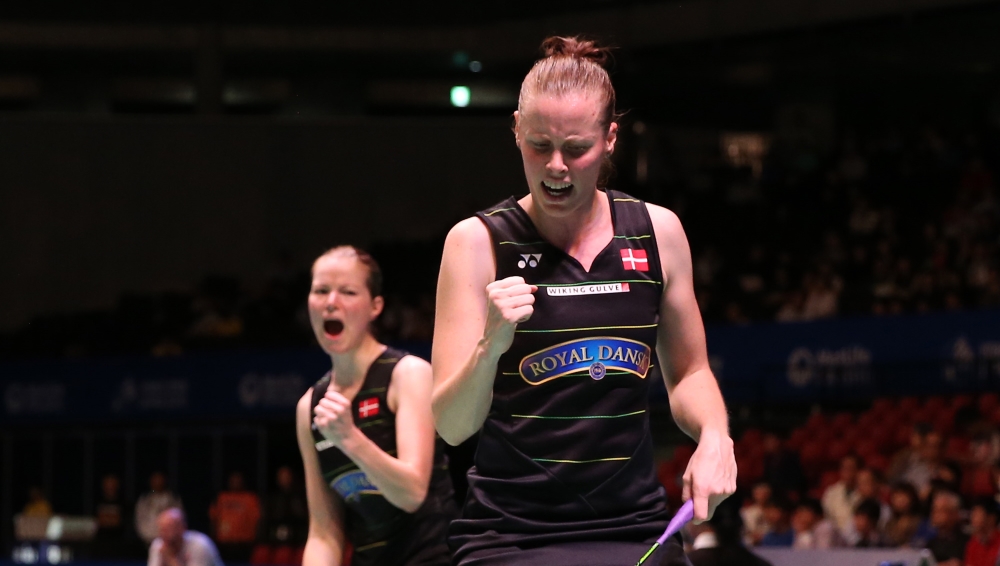 The absence of their stalwarts did nothing to prevent a Chinese surge from a new generation of shuttlers at the Yonex Open Japan 2016 today.

The powerhouses guaranteed themselves the Women’s Singles title, besides a shot at two more, as the event entered its final day. Only the Men’s Singles and Women’s Doubles stayed out of reach.

It was the turn of Men’s Doubles World champions Mohammad Ahsan/Hendra Setiawan to feel the heat from Li and Liu; the Chinese showcasing their formidable all-round skills during a 21-13 18-21 21-15 result. Unusually, the Chinese managed to prevent their opponents from dominating the net as they usually do, and extracted errors at critical moments.

He Bingjiao and Sun Yu would perhaps have assured their home fans that the vacuum created by the retirements of Wang Shixian and Wang Yihan, and a serious knee injury to Li Xuerui, won’t take too long to fill.

As she had in yesterday’s quarter-final win over Thailand’s Ratchanok Intanon when she saved three match points, He Binjiao once again conjured a win out of a hopeless position. Appearing to have lost her way in the second game against local hope Aya Ohori, who led 19-11, He Bingjiao steadily chipped away at the lead. Ohori had three game points but her Chinese opponent was rock-steady at the death and picked off the last five points to earn a 21-17 22-20 victory and enter a Superseries final for the first time. “Compared to yesterday, I felt mentally stronger today,” said He Bingjiao. “I was able to escape from the same situation. Aya Ohori played well in the beginning of the second game but I gradually found my rhythm.”

Sun Yu then shut out local star Akane Yamaguchi to guarantee the title for China.

Yamaguchi, who was near flawless in her quarter-final victory against defending champion Nozomi Okuhara yesterday, was too wayward at important moments. The Chinese was able to exploit Yamaguchi’s lack of reach and frequently had her reaching awkwardly for the shuttle. Three errors in the end broke Yamaguchi’s resistance, with the delighted Sun walking away victorious at 21-17 21-18. The performance will help her break into the top-10 of the Destination Dubai Rankings and a likely prospect to qualify for the year-ending Dubai World Superseries Finals (December 14-18) at Hamdan Sports Complex. Malaysia’s Lee Chong Wei got to within one win of his sixth Yonex Open Japan title. The World No.1 won his 13th match in as many contests against Germany’s Marc Zwiebler, taking 42 minutes to register the 21-14 21-15 result.

In the Men’s Singles final tomorrow, Lee will be up against an opponent who will hope to do what he has only once in 17 matches. Denmark’s Jan O Jorgensen’s last – and only – win against Lee was back in 2009 at the China Open.

Jorgensen, who was at his steady best against Korea’s Son Wan Ho today (21-14 21-19), acknowledged that he had a difficult task on his hands: “Lee Chong Wei is Lee Chong Wei – best player on the tour. He’s winning six-seven tournaments every year. He’s a very tough opponent and he’s the big favourite tomorrow, even though it was close in Indonesia. I’m very proud to be in another final, it’s the first time I’ve made two Superseries finals in a row.

“I’ve been playing well here, it’s because of the hard work I did before the Olympics. I feel better now than at the Olympics. I’ve got some rest and I’m playing more freely, and that suits my game. I didn’t get the result I wanted at the Olympics. I’ve been hungry to play again. That’s a very good thing. Last time I won a Superseries was in 2014. I’ve made a lot of semis and finals, so I want to win.”

The only one of five finals that will be a repeat of the title clash in Rio will be the Women’s Doubles. Christinna Pedersen/Kamilla Rytter Juhl (featured image) and Misaki Matsutomo/Ayaka Takahashi had contrasting victories today to set up an intriguing final battle.

Olympic champions Matsutomo and Takahashi weathered trouble from compatriots Shiho Tanaka/Koharu Yonemoto in the second game to emerge winners at 21-14 21-19.

Rytter Juhl and Pedersen then avenged their loss in the Olympic group stage to China’s Luo Ying and Luo Yu. A hard, enervating battle later, the Danes emerged, tired but victorious, 21-23 21-16 21-17, overturning a sequence of three straight defeats.

“We used a lot of energy. We know they have a good defence, so we had to work really really hard,” said Rytter Juhl.

“All of you were asking about this final before the tournament started,” added Pedersen. “We hoped so much to play this final and now we are in the final against Matsutomo and Takahashi. Right now we’re really tired and need to get some food and new energy but tomorrow we’ll be ready for a new fight. We know it’s going to be difficult on their home soil but we’ll do our best.”