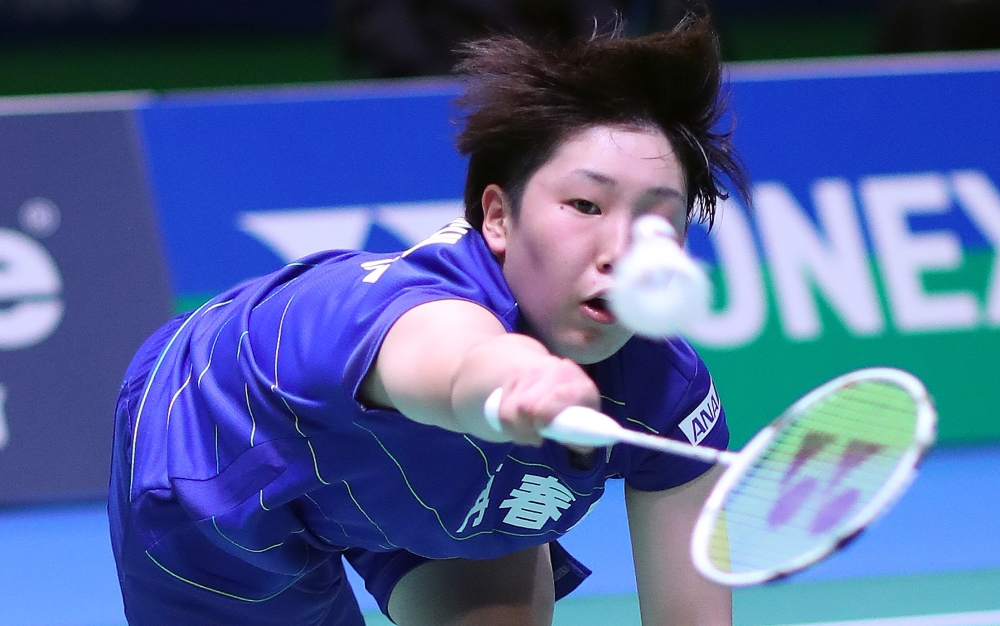 Having failed in nine previous attempts, including six international contests – her first international loss to Okuhara was at the Badminton Asia Youth Championships in 2012 – Yamaguchi turned the tables on the defending champion, to whom she had fallen in last year’s final and in the Rio Olympic quarter-finals.

Yamaguchi’s relentless attack, coupled with Okuhara’s slightly sluggish performance, contributed to the result. The defending champion threw everything into it late in the contest, having her opportunity to level the first game deficit with a game point in the second, but Yamaguchi stayed the course and carved out a 21-11 23-21 victory.

“Winning a game against Okuhara finally made me believe I could beat her,” said Yamaguchi. “I remembered the mistakes I’d made. I had nothing left in the second game the last time; today I was more patient.”

Another Japanese, Aya Ohori, won a close match today over compatriot Ayumi Mine, entering a Superseries semi-finals for the first time in her career.

Meanwhile, China’s He Bingjiao stepped up to the plate in the absence of her illustrious seniors with a combative victory over Thailand’s Ratchanok Intanon.

With China missing their three big Women’s Singles stars of recent years – Li Xuerui, Wang Shixian and Wang Yihan — due to injury or retirement, the Youth Olympic Games champion showed she belonged in the elite league, saving three match points and denying Intanon a shot at her fourth Superseries title this season. The Chinese won 22-20 14-21 24-22 in one of the most exciting quarter-finals today. “It was very hard for us to control shuttle in the first game, we both made a lot of mistakes,” said Zwiebler. “After that it was very tight. It was up and down. So happy I won. It means a lot to me as this is one of the most prestigious and traditional tournaments in the circuit.

“I play Lee Chong Wei tomorrow. We practise a lot together. It will be hard for me to beat him… actually, after the Olympics, I was with him and we were talking in his apartment for 1-1/2 hours. We encouraged each other to get over our disappointment and try again next time. Now we meet in the semi-finals.” The other semi-final pits Denmark’s Jan O Jorgensen against Korea’s Son Wan Ho. Jorgensen enjoyed a comfortable result over young Thai Khosit Phetpradab, 21-6 21-16, while Son was all over Dane Viktor Axelsen, closing out the match 21-18 21-13.

“Son played a good game. I wasn’t there today, I had big problems staying on court both physically and mentally. I moved pretty bad,” rued Axelsen. “When you’ve played such an important tournament in Rio, you can’t play at your best level here. That being said, I’m still disappointed.”

Denmark’s Kamilla Rytter Juhl and Christinna Pedersen were within a hair’s breadth of crashing out, but the Olympic silver medallists stayed calm in the face of three match points and eventually dug their way out against Malaysia’s Vivian Hoo/Woon Khe Wei.

With Woon poaching a shot at the net for 20-17, the Malaysians looked set for their first win in four matches against Pedersen and Rytter Juhl. However, the combative Danes stood firm, and once they caught up at 20, kept their noses ahead, finally grabbing the winner at 23-21. Hoo and Woon couldn’t keep up in the third, going down 20-22 23-21 21-14.

“We were struggling in the beginning until 20-17, but then we started to play the right way,” said Rytter Juhl. “The Malaysians have improved a lot over the last year. We were struggling with our game, and they were solid in the front court. They won the net, as we say. In the second, we led 8-4, but got behind and that was a sign we weren’t comfortable. We’re very happy to have won.”

In one of the most absorbing Mixed Doubles matches of the day, World Junior champions Zheng Siwei and Chen Qingchen held off battling Thai pair Puavaranukroh Dechapol/Sapsiree Taerattanachai 21-13 17-21 23-21. “We played our top performance, but they were better,” said Taerattanachai. “We are happy with our result. We have been partners for just five months. I think we will improve. We got a lot of confidence from our performance today.”

Defending champions Joachim Fischer Nielsen/Christinna Pedersen were shown the door by China’s Lu Kai/Huang Yaqiong, who set up an all-China semi-final with their compatriots Zheng/Chen.

It was a good day overall for Japan and China. Apart from Yamaguchi and Aya Ohori in Women’s Singles, the hosts have three other representatives for the semi-finals, while China have six.