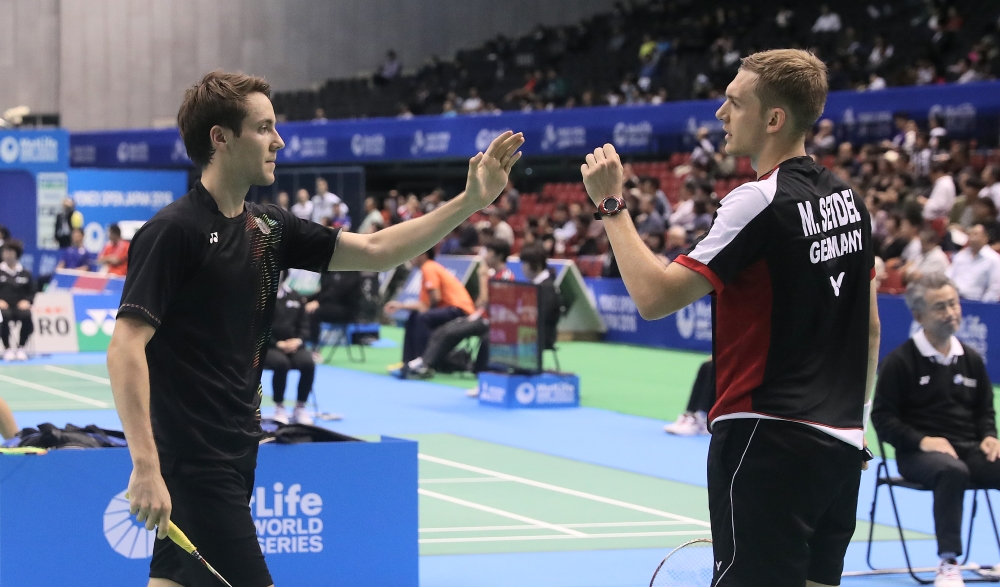 Men’s Doubles top seeds Chai Biao and Hong Wei crashed out to an unheralded German pair in the opening round of the Yonex Open Japan today.

Mark Lamsfuss and Marvin Emil Seidel (featured image), who hadn’t made the second round in any of their previous World Superseries events, achieved perhaps the biggest result of their career in stopping the Chinese duo, 21-17 21-17, in just 34 minutes.

“One of the happiest moments in my career. Just incredible,” said Siedel. “We had a long training period, we trained for three months and there were no tournaments in this period. I had some injuries before that, it took me a lot of time to get into the game again but now we are back at our top form.”

“We just had to believe in winning,” said his partner Lamsfuss. “Just focus on serving well and attacking. Our serve situation was very good. We could get the attack every time. We knew we can beat them, in the end we believed we could win.”

The category nearly saw the exit of the second seeds as well: Mohammad Ahsan/Hendra Setiawan flirted with disaster against England’s Peter Briggs/Tom Wolfenden but came away winners by a slim margin: 25-27 21-13 24-22. The Indonesians led 18-13 in the third, only for Briggs and Wolfenden to storm back with six straight points. Ahsan and Setiawan wrested back the initiative at the death from match point down and converted on their third opportunity.

Japan enjoyed a good day in Women’s Singles with a number of their players making the second round. Sayaka Sato overcame late resistance from No.4 seed Tai Tzu Ying (Chinese Taipei) in the first game to eventually coast to a 22-20 21-14 win. Qualifier Natsuki Nidaira overcame match point to take down Thailand’s Porntip Buranaprasertsuk, 15-21 21-19 22-20, while fellow-qualifier Chisato Hoshi was the beneficiary of a retirement from Canada’s Michelle Li. Last year’s runner-up Akane Yamaguchi expectedly brushed aside the challenge of Hong Kong’s Yip Pui Yin, 21-13 21-14. Kaori Imabeppu joined her Japanese compatriots in the second round beating Korea’s Kim Hyo Min 21-19 21-18. Intanon revealed that she had set aside her disappointment of losing in the Round of 16 in the Rio Olympics and was now focussing on the year-ending Dubai World Superseries Finals.

“I was disappointed with my game in Rio, but it was my destiny,” said Intanon. “I just have to forget it and train harder because there are a lot of players better than me. The next target is to qualify for Dubai. I also want to stay on as No.1 as long as possible.

“Carolina Marin showed very good mental strength in Rio. I would like to congratulate her for winning the gold. She has a lot of confidence; maybe some of us don’t have the same level of confidence.” Veteran Lee Hyun Il staged an impressive comeback over Thailand’s Tanongsak Saensomboonsuk, fighting off three match points to post a 26-24 19-21 24-22 victory in 79 minutes. The 36-year-old Korean, who won the title here 14 years ago, showed his skills haven’t declined with age as he kept his composure in authoring the win.

Lee will face Son Wan Ho in an all-Korea second round clash.

Denmark’s Hans-Kristian Vittinghus, winner of the Xiamenair Australian Open, bowed out in the opening round to China’s Qiao Bin, 23-25 21-12 21-14. In Women’s Doubles, Japan’s fourth seeds Naoko Fukuman/Kurumi Yonao were shown the door by China’s Yu Xiaohan/Ou Dongni, 21-15 21-13. Despite that loss, the home team ensured six pairs in the second round. Of these, Yuki Fukushima/Sayaka Hirota were most impressive, getting past Bulgaria’s Stefani Stoeva/Gabriela Stoeva 21-17 21-13.