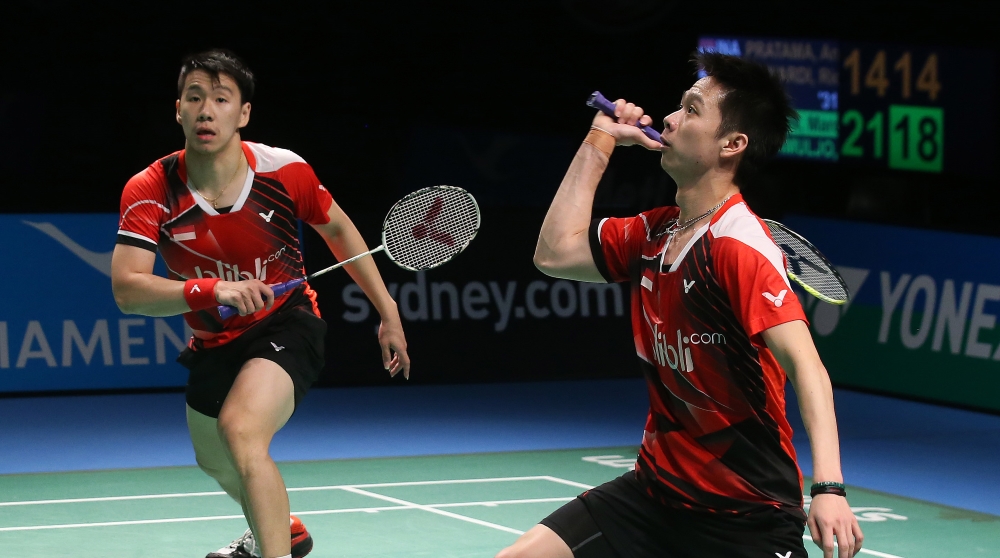 A young and dynamic Indonesian pair leads the pack in the Destination Dubai Rankings, signifying exciting times ahead for their country in Men’s Doubles.

With two World Superseries titles, Marcus Fernaldi Gideon and Kevin Sanjaya Sukamuljo (featured image) proved that they have winning ability to go with their obvious talent, and they will be the pair to watch. The Indonesian duo captured the Yonex-Sunrise India Open and the Xiamenair Australian Open to climb atop the Destination Dubai Rankings midway through the MetLife BWF World Superseries season.

The pair they beat in both finals were, incidentally, their compatriots Angga Pratama/Ricky Karanda Suwardi, who are No.4 in the rankings. Pratama/Suwardi had their problems with consistency, although they excelled in the team events, winning all their matches in the Asian Team Championships and the TOTAL BWF Thomas Cup.

Fellow-Indonesians and World champions Mohammad Ahsan/Hendra Setiawan have had a poor season and are No.12. If their form revives over the next six events, there could be an exciting race between the Indonesian pairs to qualify for the season-ending Dubai World Superseries Finals, since an NOC can only have a maximum of two pairs in the competition. Another Indonesian duo, Berry Angriawan/Rian Agung Saputro, are also in the running as they are No.14. China’s Chai Biao/Hong Wei are less than 1000 points behind leaders Gideon/Sukamuljo in second place.  Two runners-up spots – in Malaysia and Indonesia – and a quarter-final in Singapore have seen Chai/Hong emerge as the top Chinese pair ahead of Fu Haifeng/Zhang Nan, who are in sixth. Fu/Zhang, winners of the OUE Singapore Open and quarter-finalists in Australia, went on to win the gold in Rio, probably their last campaign together. The next Chinese pair in contention are Li Junhui/Liu Yuchen (No.16), who have given enough indication that they will be the main threats to those ranked above them. Korean icons Lee Yong Dae/Yoo Yeon Seong are No.3 despite playing only in four events – of which they won one (BCA Indonesia Open) and were semi-finalists in the rest. The pair, expected to do well in Rio, fell in the quarter-finals, and will therefore have plenty of motivation to qualify for Dubai – an event they cherish, having won the event in 2014.

Malaysia’s Goh V Shem/Tan Wee Kiong will have their tails up this season, having exceeded all pre-Olympic expectations by making the final in Rio and nearly getting their hands on the gold medal. The Malaysians are No.5 – they were semi-finalists in England and India and quarter-finalists in Indonesia – and if they play the way they did in Rio, should be one of the title favourites in Dubai.

Japan’s Hiroyuki Endo/Kenichi Hayakawa (No.7) started the year well, making the Yonex All England final, but since then have been off-key. Quarter-finals in Malaysia and Australia were their next best results; a back injury to Hayakawa in Rio stymied their chances somewhat.

At No.8 are former World champions, Ko Sung Hyun/Shin Baek Choel, but the pair might not be persisted with. Ko Sung Hyun is partnering Kim Gi Jung in the Yonex Open Japan and Kim Jae Hwan in the Victor Korea Open. The post-Olympics season is typically one of experimentation and a few retirements and one can expect to see new combinations being tried out.

With two of the top eight pairs unlikely to continue, those below them will sense their opportunity. No.9 Takeshi Kamura/Keigo Sonoda (Japan) and No.10 Mads Pieler Kolding/Mads Conrad-Petersen (Denmark) have both had some encouraging results and will back themselves to qualify for Dubai. The Danes excelled in the few tournaments they played – quarter-finalists in Malaysia and Indonesia, winning the European Championships and helping Denmark to their first Thomas Cup title.

Senior compatriots Mathias Boe/Carsten Mogensen, meanwhile, are No.43 as they have taken part only in one Superseries – the Indonesia Open – as Mogensen was off the circuit after a brain surgery. Another Danish pair, Anders Skaarup Rasmussen/Kim Astrup are No.15 and have a shot at making it to Dubai.

Russia’s Vladimir Ivanov/Ivan Sozonov (No.18) started the year spectacularly by winning the All England, but an injury to Sozonov saw them off the circuit for a while. After a strong showing in Rio, the Russians have proved they are back on track and might be among the pairs to watch in the remaining Superseries.