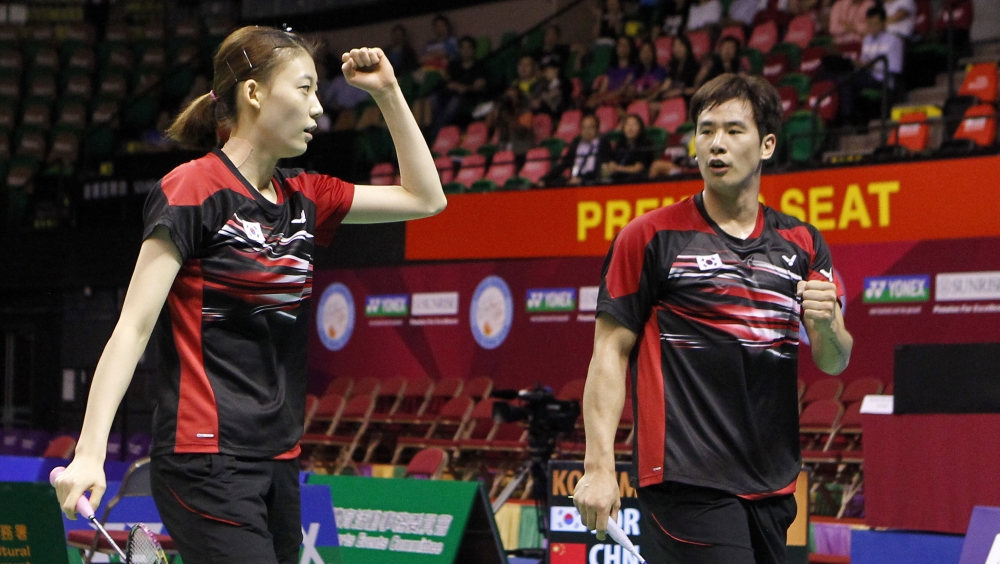 Lu and Huang head a clutch of five Chinese pairs in the top bracket of the Destination Dubai Rankings in the MetLife BWF World Superseries circuit – the only category which the Chinese have dominated so comprehensively this season. After an early exit in England, Lu and Huang captured their first Superseries title as a pair with a victory in India, beating Indonesia’s Ricky Widianto/Puspita Richi Dili in the final.

After slumping to first round losses in Malaysia and Singapore, Lu and Huang found form in Indonesia, making the semi-finals, before crowning themselves champions once again, at the Xiamenair Australian Open. The results saw them earn 35,300 points, just short of leaders Ko Sung Hyun/Kim Ha Na’s (Korea) 35,340 points. Other Chinese in the top ten are Xu Chen/Ma Jin at No.6, Liu Cheng/Bao Yixin at No.8 and Liu Yuchen/Tang Jinhua at No.10; World champions Zhang Nan/Zhao Yunlei are one spot behind them, in 11th.

The top-placed Ko and Kim (featured image) were able to win one Superseries – the OUE Singapore Open – and were consistent at all the others. After a second round slip in England, the Koreans made steady progress with a semi-final in India, quarter-final in Malaysia and title in Singapore. They followed up with a runner-up place in Indonesia and will head to Rio mostly pleased with their form this season.

Joachim Fischer Nielsen/Christinna Pedersen are in third place. The Danes had a bright start, finishing runners-up in England and making the semi-finals in Malaysia. Two quarter-finals – in India and Indonesia – helped them to third place, ahead of two Indonesian pairs: Tontowi Ahmad/Liliyana Natsir and Praveen Jordan/Debby Susanto.

Ahmad and Natsir had the strangest season for a top pair. Winners in Malaysia, the Indonesians suffered a nightmarish exit to a scratch Danish pair in the second round of their home tournament, the BCA Indonesia Open. The humiliation was particularly acute as their victors – Kim Astrup and singles player Line Kjaersfeldt – had partnered after many months. The nature of that loss, and the subsequent first round exit in Australia, means that the Indonesians have their work cut out for them if they are to contest for a medal in Rio. Jordan and Susanto’s fortunes too see-sawed. Their victory at the Yonex All England was their first ever Superseries title, but the high didn’t last long. Unremarkable results followed up to the Australian Open, where they entered the semi-finals.

Xu Chen and Ma Jin have had modest Superseries results for a while; the tide turned in Singapore, with the Chinese surging into the final where they were stopped by Ko/Kim. Just over a month later they were not to be denied, as they beat the same opponents in the final in Indonesia, to climb up the Destination Dubai Rankings to sixth place. The Adcocks’ best was a semi-final at their home event, while Liu/Bao suffered a dip in performance compared to last year; their best being quarter-finals in England, Indonesia and Australia.

Liu Yuchen and Tang Jinhua are way down in the world rankings at No.46, but thanks to their performance in Superseries, they are perched at No.10 in the Destination Dubai Rankings. The duo played five Superseries this season, making quarter-finals in India, Singapore and Australia.

At No.11 are their illustrious compatriots Zhang Nan/Zhao Yunlei, winners of half-a-dozen Superseries last year, but who have yet to open their account this season. Nevertheless, Zhang/Zhao were semi-finalists in England, Malaysia and Indonesia and will still be the pair to beat in Rio, despite their apparent lack of form in the run-up to the Olympics.

Among the pairs who beat them this year was Chan Peng Soon/Goh Liu Ying, who stopped the Chinese at their home event in Malaysia on their way to the final. Chan/Goh sparkled at times and had other good results to show, including a semi-final finish in Australia, and saw their Destination Dubai Ranking climb four places to No.12. With the players likely to return to the second half of the Superseries season refreshed and eager, the action will build up all the way to Hamdan Sports Complex for the Dubai World Superseries Finals. The post-Olympic season is set for its share of nail-biting action!