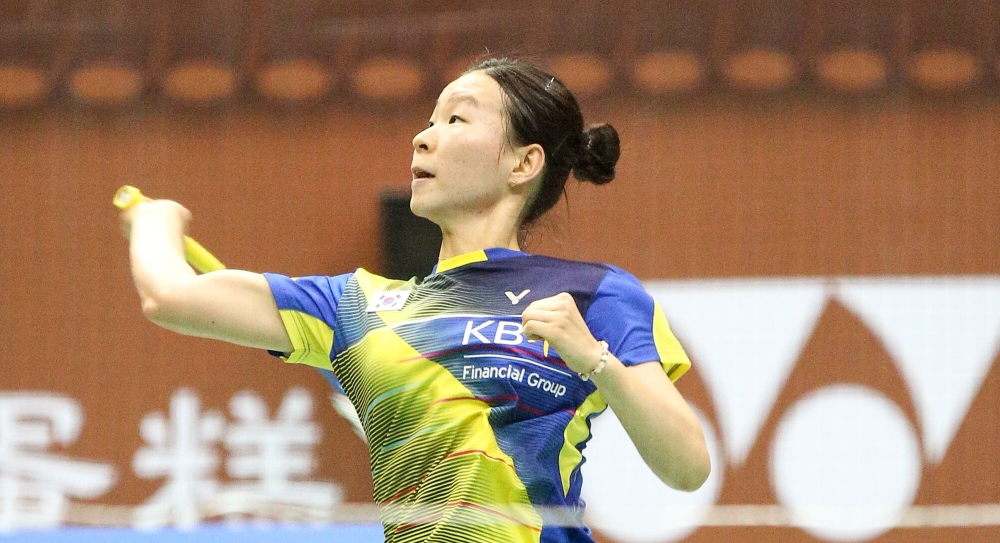 The Thai had had a good season so far, having made the semi-finals of the Bonny China Masters recently after quarter-final performances at the Celcom Axiata Malaysia Open and OUE Singapore Open. But her Korean opponent (featured image) got an early lead and never relaxed her hold on the game, decimating the Thai’s defences in a 21-15 21-12 rout that took just 34 minutes. Buranaprasetsuk’s was one of the few upsets on a day when most seeded players progressed into the next round.

Her compatriots Busanan Ongbumrungpan, Nitchaon Jindapol and Pornpawee Chochuwong, Korea’s Kim Na Young and China’s Chen Yufei, Sun Yu and Wang Shixian were among those who booked their places in the second round.

On a rather hectic day in Men’s Singles – the first two rounds were held today –Iskandar Zainuddin Zulkarnain ensured an all-Malaysia third round with Daren Liew. Zainuddin, who’d played a pivotal role in ensuring his country’s appearance in the Thomas Cup semi-finals last month, outplayed Indonesia’s Abdul Firman Kholik 21-19 21-11 in the first round and Singapore’s Derek Wong 21-10 21-14 in the second.

“I’m happy with the win as I had lost in the early rounds in Indonesia and Australia,” said Iskandar. “Of course it was very tiring today, having to play two matches. I didn’t get much of a break. I played well in the Thomas Cup and was confident after that but I lost early in the next two events. If I can get a bit better physically and mentally, I believe I can break into the top 20.” OUE Singapore Open champion Sony Dwi Kuncoro of Indonesia, expected to do well here, ran out of steam in the third game of his opening match against local hope Lin Yu Hsien and bowed out 17-21 21-8 21-18. Lin’s day got even better as he muscled past Korea’s Heo Kwang Hee in straight games for a third round match-up with compatriot Yang Chih Chieh tomorrow.

“Of course it’s disappointing to lose; some fans might have expected me to do well after I won the Singapore Open, but you can’t really go by expectations,” said Kuncoro, “I have to focus on myself. My opponent played well today, he controlled the net better than I did.” No.6 seeds Huang Kaixiang/Huang Dongping also crashed out, to Malaysia’s Tan Kian Meng/Lai Pei Jing, 21-12 21-19, while their Chinese compatriots Liu Yuchen/Jia Yifan joined them on the sidelines after falling to against Indonesia’s Alfian Eko Prasetya/Annisa Saufika 21-18 19-21 21-16. The Indonesians face top seeds Chan Peng Soon/Goh Liu Ying for a place in the quarter-finals.

Second seeds Lee Chun Hei/Chau Hoi Wah struggled to get past local qualifiers Lu Ching Yao/Huang Mei Ching, but made it in straight games after their challengers ran them close in the second.

“We’re still trying to find our form; we weren’t used to the conditions,” said Chau. “We haven’t been our best the last few tournaments. With the Olympics coming up, we’re relaxed and we feel we are getting better.” A potentially difficult match looms in the second round, against China’s Li Junhui/Zhong Qianxin.

Indonesia’s Della Destiara Haris/Rosyita Eka Putri Sari had it easy in their opening round but will have to brace for a difficult encounter against No.2 seeds Chen Qingchen/Jia Yifan.