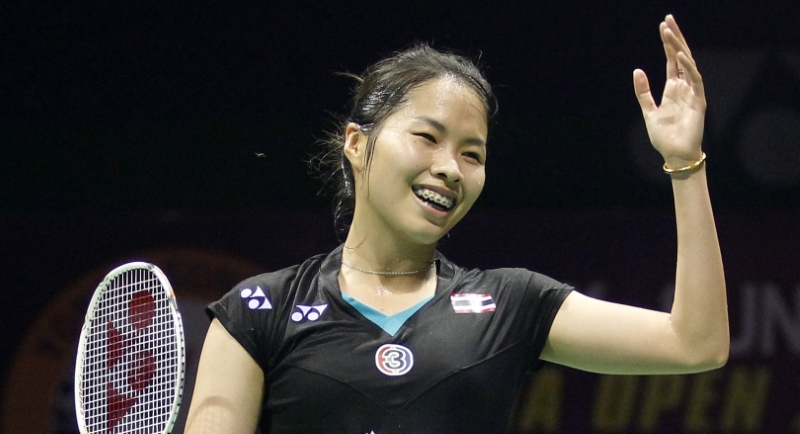 It is a measure of the depth and diversity of Women’s Singles badminton that the top ten players on the Destination Dubai Rankings come from seven nations!

The last couple of years have seen Women’s Singles grow on every count; today the category is at its healthiest ever, with a great diversity of playing styles. Women’s Singles is no more in the shadow of Men’s Singles; it has a unique attraction of its own, thanks to the personalities who dominate the world stage.

Halfway through the MetLife BWF World Superseries season, one player has emerged in new light. Thailand’s Ratchanok ‘May’ Intanon, who endured a long title drought following her BWF World Championships win in 2013, suddenly struck a rich vein of form early this year, showing great tenacity along with her long talked-off natural skill, taking the Yonex-Sunrise India Open. Intanon (featured image) was subsequently unstoppable, rolling over opposition at the next two events – the Celcom Axiata Malaysia Open and the OUE Singapore Open – giving her a unique hat-trick of Superseries titles and the winning momentum heading into the Rio Olympics.

Intanon is the leader in the Destination Dubai Rankings, followed closely by Chinese Taipei’s Tai Tzu Ying, who picked up her first Superseries title since December 2014, at the BCA Indonesia Open. Tai was consistent, finishing runner-up in Malaysia, making the semi-finals in England and the quarter-finals in India and Australia. In Indonesia, Tai achieved the rare feat of beating the top three Chinese – Li Xuerui, Wang Shixian and Wang Yihan – in the course of a week. Saina Nehwal has been on the cusp of winning a Superseries for over a year, but a title has eluded her since March last year. The Indian finally broke the spell with a strong showing at the Xiamenair Australian Open, holding off China’s Sun Yu in a close finish; the victory helped her climb three places to No.3 in the Destination Dubai Rankings.

For someone who is so popular in Dubai, Nehwal’s title will keep her in contention to make the year-end trip to the Dubai World Superseries Finals. “If you are playing well and reaching finals, semi-finals and quarter-finals, then your Dubai ranking should take care of itself,” Nehwal said. “I am aware Dubai is there. It is in the background right now – we still have a long way to go with the Olympics and other tournaments – but of course I want to qualify again. I really like that place and the event. So many Indians come to support me so I hope I can go there and win it. I hope I can finally make my fans in Dubai happy.”

Three Chinese – Wang Shixian, Wang Yihan and Li Xuerui – follow Nehwal in the rankings. It is a sign of the current competitiveness of Women’s Singles that no Chinese has so far won a Superseries this year, although the top four have been close to their best form. Wang Shixian, Li Xuerui and Wang Yihan finished runners-up in England, India and Indonesia respectively, while their compatriot Sun Yu fell short in the final hurdle in Singapore and Australia.

Two Japanese – Nozomi Okuhara and Akane Yamaguchi – occupy spots 7 and 9. Okuhara had a great start to the year, winning the All England, but then lost her way, before making the quarter-finals of the Indonesia Open. Yamaguchi had her moments, but her best was a semi-final finish in Singapore.

Two-time World champion Carolina Marin wasn’t the dominant player she was in 2015. The Spaniard managed a couple of semi-finals (All England and Indonesia), but she was some way off from the world-beating form she’d demonstrated last year. Marin stated she wasn’t too concerned about her current form (she’s No.8 in the Destination Dubai Rankings), since her main focus was on peaking in Rio. Another top player who had a lean spell was Sung Ji Hyun. The Korean, who frequently promised to upstage her higher-profile rivals, faltered at critical moments and could not build on the momentum of her home Superseries win in September last year. Sung made three quarter-finals and was perched at No.10 in the rankings.

Two Chinese – Sun Yu and He Bingjiao – are at No.11 and No.12; while Sun has enjoyed a strong season, He Bingjiao has made a surprisingly rapid transition from the junior level to the seniors, with wins over the likes of Tai Tzu Ying, PV Sindhu and Ratchanok Intanon. A semi-final finish at the Singapore Open might be an indicator of things to come from the young left-hander.

Plenty of enthralling action lies ahead after the Olympics as the players will resume their quest to qualify for the Dubai World Superseries Finals!