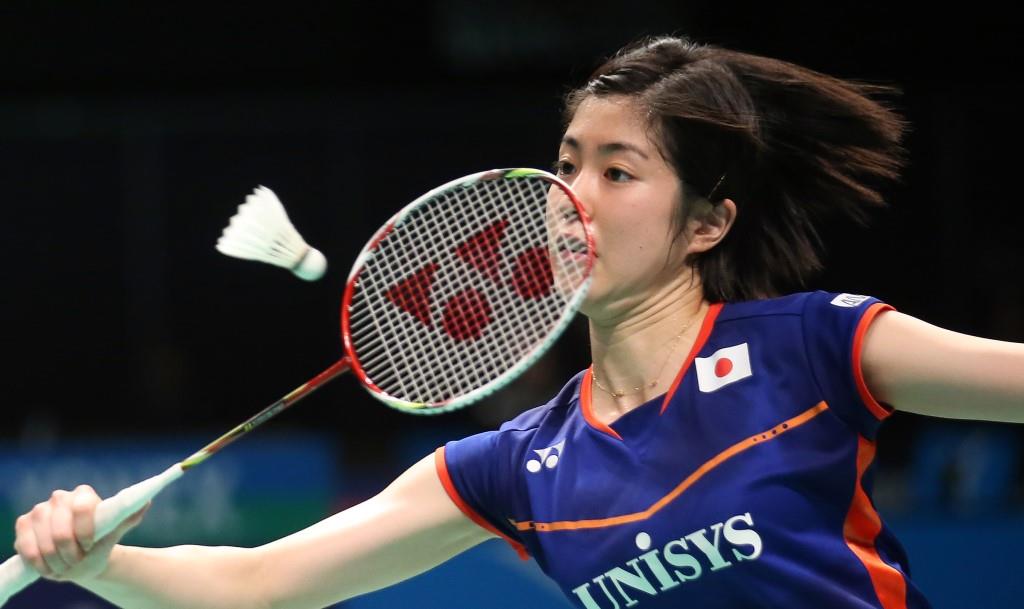 games. Their 21-18 21-16 rout of the No.2 seeds was followed on the same court by an equally impressive showing by World Junior champions, Zheng Siwei and Chen Qingchen, to dispatch Mr and Mrs Adcock – Chris and Gabby – for a similar score: 21-16 21-18.

The No.5 seeds could not conjure up another on-court escape, having squeezed into the second round yesterday. Led from virtually start to finish in the first game, the English duo seemed determined to make a comeback in the second, battling all the way but, at 16-16, some good attacks by the young Chinese proved critical and they pulled away for a satisfying victory.

“We have played them before so we were not very tense. I am happy with how I played though me and my partner still have some small things to work on,” said Zheng, the BWF Most Promising Player of the Year for 2015.

He and Chen were also pleased that two other pairs from their country advanced to the last eight in Mixed Doubles. Liu Cheng/Bao Yixin were the third Chinese combination to reap success at the Sports Centre in Sydney Olympic Park. The No.4 seeds thwarted Malaysia’s Tan Kian Meng and Lai Pei Jing, 21-9 19-21 21-11. By contrast, all of Denmark’s Mixed Doubles hopes evaporated as Kim Astrup/Line Kjaersfeldt and then Anders Skaarup Rasmussen/Maiken Fruergaard were beaten though snatching the first games in their respective matches. As they shook hands with their conquerors – Indonesia’s Riky Widianto and Puspita Richi Dili – Astrup and Kjaersfeldt must have rued their failure to convert match point in the second game; eventually succumbing 14-21 23-21 21-14. Japan’s Kenta Kazuno and Ayane Kurihara (featured image) also staged a comeback win (15-21 21-16 21-14) versus Rasmussen and Fruergaard.

Late-night drama in Men’s Doubles saw the demise of Indonesia’s World champions, Mohammad Ahsan/Hendra Setiawan, for the second time this season at the hands of seasoned Malaysian duo, Koo Kien Keat and Tan Boon Heong. The cliff-hanger kept die-hard fans in their seats until the last point was won as Ahsan hit wide. After splitting the first two games, the Indonesian top seeds appeared in control with a 16-10 advantage in the decider, only to see their long-standing rivals reel them in at 17-17. It was point for point thereafter, with the Malaysians’ resolute defence holding “We don’t know how we did that. We just kept playing, fighting. We have no pressure on us. We were not thinking about winning or losing. We are not going to the Olympics so we can relax and just play freely. We have played these guys more than a decade and we are familiar with them,” said an exhausted Koo.

The vanquished Indonesians credited their opponents’ good transitions from defence to attack, noting they did not handle those situations well. However, it may be Indonesia which has the last laugh as three of its other Men’s Doubles outfits progressed to the last eight: Berry Angriawan/Rian Agung Saputro; Angga Pratama/Ricky Karanda Suwardi; and Gideon Marcus Fernaldi/Kevin Sanjaya Sukamuljo.

In Women’s Doubles, Japan’s front-runners in the Destination Dubai Rankings, Misaki Matsutomo/Ayaka Takahashi, continued their quest for a fourth title in this year’s MetLife BWF World Superseries tour, having won in Birmingham (All England), India and Indonesia last weekend. The top seeds are joined in the quarter-finals by No.2 pair, Nitya Krishinda Maheswari/Greysia Polii, as well as three Chinese partnerships: Bao Yixin/Chen Qingchen; Huang Yaqiong/Tang Jinhua; and No.3 seeds Tang Yuanting/Yu Yang. Another Japanese duo, Naoko Fukuman/Kurumi Yonao, are also in the mix having overcome Thailand’s Puttita Supajirakul/Sapsiree Taerattanachai (21-10 21-17).

Elsewhere, Women’s Singles is again shaping up to be humdinger, with a host of familiar faces through to the last eight, including Ratchanok Intanon of Thailand – already a triple World Superseries winner this year – and Chinese Taipei’s Tai Tzu Ying who claimed the BCA Indonesia Open title last Sunday. India’s Saina Nehwal; Akane Yamaguchi of Japan and four Chinese complete the roster. Increasingly becoming a regular at the business end Not having savoured a World Superseries victory since last year’s Yonex Denmark Open, Chen Long is clearly eager to make up for lost glory. The Chinese World champion produced another polished display to get past Malaysia’s Zulfadli Zulkiffli, 21-17 21-12. Chen now tackles 19-year-old Indonesian, Anthony Ginting, for a semi-final berth. The latter showed his mettle to oust Indian Sameer Verma, 11-21 21-7 21-19, and is anticipating his first clash with Chen Long.

“I am happy to win but I will have to play better against Chen Long. I made too many mistakes today. I was trying to attack too much in the first game. I settled down in the second and was more patient,” said Ginting.

Young Koreans, Jeon Hyeok Jin and Heo Kwang Hee, have also done well so far, with Jeon through to the semi-finals thanks to a walkover by his quarter-final opponent, Hu Yun. The Hong Kong player withdrew after beating Spain’s Pablo Abian (21-18 16-21 21-13) today. Meanwhile, Heo faces re-energised Kidambi Srikanth of India. The other semi-finalist will be either Denmark’s Hans-Kristian Vittinghus or Sho Sasaki of Japan.