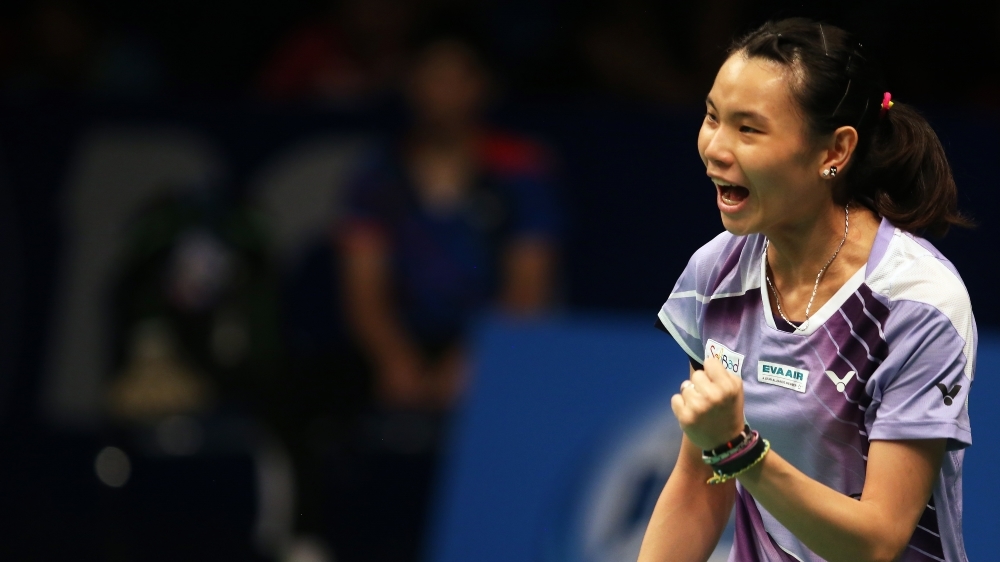 Tai Tzu Ying’s wizardry and Lee Chong Wei’s monk-like calm in a slippery match headlined the final day of the BCA Indonesia Open as they took home the singles titles.

China’s Wang Yihan, after her defeat of World champion Carolina Marin in the semi-finals, was the favourite going into the Women’s Singles final, but Tai Tzu Ying delivered a masterclass of trickery to leave her all tangled up. With her range of loopy slow drop shots and forecourt shots that she often held back, Tai caused Wang no end of misery. The second game was a washout for Wang as even the normally combative Chinese star suffered a meltdown, failing to even get into double digits: 21-17 21-8. In doing so, Tai achieved the rare feat of beating all three top Chinese – Li Xuerui, Wang Shixian and Wang Yihan – in the course of a tournament.

In contrast, the Men’s Singles final had been a tense affair all through its 65-minute duration. The Dane had appeared exhausted after his long semi-final but still found the spirit in himself to deliver a blistering attack that the second seed reeled from. The match was unlike their previous encounters: Jorgensen controlled the tempo, preventing Lee from imposing his fierce attack, and surprising him with smashes from odd angles with which he continuously picked up points. It was heavy going for the Malaysian, and at 19-17 in the second, the Dane appeared on the brink of a fairytale victory at his favourite venue.

Lee abruptly turned it around at this point, delivering a pinpoint smash to the deep; his astounding defence then came to his aid as he levelled at 19. The momentum subtly shifted, and the second game was lost by Jorgensen after he misjudged a low serve.

The Dane, to his credit, still gave it everything he had in the third, and gained a marginal lead until Lee caught up at 10. From then the Malaysian hit cruise mode – high jump smashes, quick darts to the net, and sharp placements that Jorgensen could not counter.

“I’m very happy to win the Indonesia Open for the sixth time,” said Lee. “Today Jorgensen played very well. I was relaxed and in the beginning I didn’t play so well. In the second game he was leading 19-17, I was preparing myself to lose. I just wanted to try for each point. Jorgensen played much played better today compared to previous matches. I beat him in Malaysia, but he played a better game today. I hope I can come next year to Indonesia and keep my form.” Jorgensen rued his missed chances in the second game.

“I started strong and executed my game plan well. I was pushing him around and waiting for the right chance to attack him. I’ve played some tough games the last two days and tried my best to get as ready as possible.

“In the second set I had my chances. I stuck everything together and got the chance at the end, and then blew it. So I’m very disappointed, I think I should have won it. I thought it was my game. I made the game and he was playing around. “Credit to him for taking it when he saw a chance. We’ve been talking about mental games and this one shows everything, at a high level. I couldn’t take the right decisions in the end.”

The victory will be a further boost for the Malaysian’s campaign for a first Olympic title; it will also help him qualify to the season-ending Dubai World Superseries Finals after missing out the last two years. The BCA Indonesia Open is the fifth stop in the 12-event strong MetLife BWF World Superseries circuit; the top eight players and pairs will get to play off in Dubai for the season-ending crown.

Japan’s Misaki Matsutomo and Ayaka Takahashi hit their stride only late in their m  atch against China’s Tang Yuanting and Yu Yang in the Women’s Doubles final. Until then, the match had swung wildly, with the drift being a deciding factor as the Japanese easily took the opening game and the Chinese reversed their fortunes in the second, at one stage leading 10-0.

For the most part, Matsutomo and Takahashi had targeted the relatively slower Yu Yang, constantly using the flicked serve against her. Still, the Chinese led by a bit in the decider, with the Japanese still unable to recapture their best form.

It was only in the third that the Japanese found their level, with some brilliant defence that thwarted several of Tang’s smashes. Once that point had been won, the confidence appeared to return, and they quickly pulled away from the Chinese to claim their sixth World Superseries title overall. “The direction of the wind had changed completely since yesterday, that’s why we were so confused and Ayaka hit many shots into the net,” said Matsutomo. “The objective was to keep pushing ahead and moving forward; it worked in the third game. Still, we are not satisfied with our level. The way we were playing, we thought we would lose. We have to improve.” Korea’s Lee Yong Dae and Yoo Yeon Seong’s last encounter with China’s Chai Biao and Hong Wei had ended 30-28 in the decider in the Koreans’ favour, but today they had it wrapped up much more comfortably. After falling behind in the beginning, the Koreans gradually established total control, holding the reins tight and giving Chai and Hong nothing to work with. The 13-21 21-13 21-16 result helped Lee/Yoo capture their first Superseries title of the year. The Chinese mostly had it their way, with Ma Jin orchestrating the play at the front. The Koreans didn’t help themselves with the number of errors they made in the third game. Xu and Ma led from start to finish to complete the 21-15 16-21 21-13 result, which reversed a sequence of four straight losses to Ko/Kim.

“I haven’t been well for a while, which is why we haven’t really done well the past year,” said Xu Chen. “Today everything came together and we were able to dominate in the third game.”