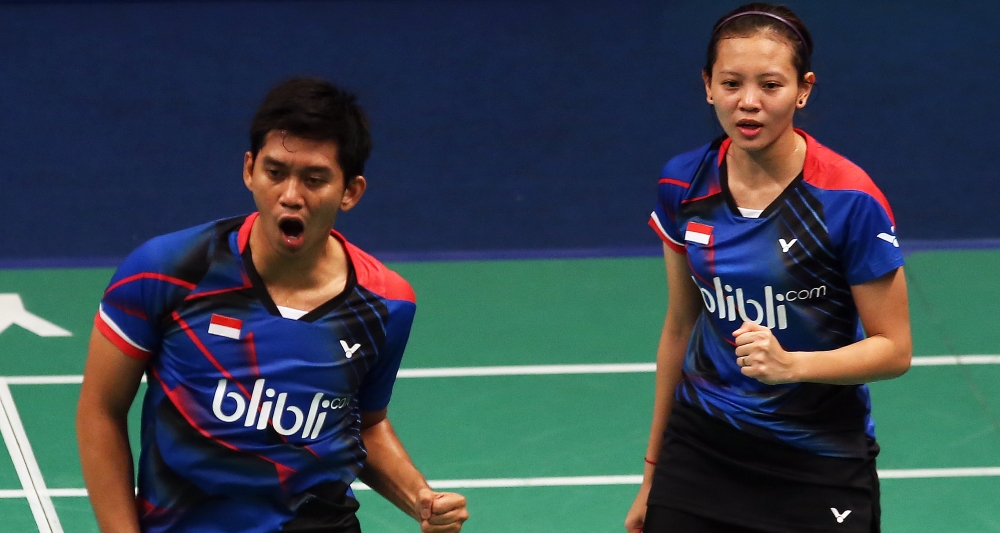 at one of her favourite venues today.

The Thai, defending champion at the BCA Indonesia Open and on a run of three straight Superseries titles, found her touch too late against China’s Sun Yu as she crashed out 21-15 21-18. It was her earliest loss since last year’s Thaihot China Open.

Intanon was down at a game and 11-18, but she gamely fought on and Sun Yu suffered some nervous moments before closing it out in straight games.

“I just couldn’t control the shuttle,” said Intanon. “I’m sorry I couldn’t do better – I know the crowd was supporting me. I didn’t have much time to acclimatise to the conditions and a lot of the shuttles were going out. My run of Superseries wins has come to an end but it’s okay. The other players too are getting better all the time.”

Another local heart-throb – India’s Saina Nehwal, who has often proclaimed the Indonesia Open as her favourite event – faced some trouble from Chinese Taipei’s Pai Yu Po, but stepped on the gas in the third and closed it out comfortably: 21-11 19-21 21-15.

“I just love playing here. I don’t know what it is about Indonesia that makes me play my best,” said Nehwal. “This time it’s really hot in the stadium. I haven’t ever felt like this here. This is the first time I’m playing Pai Yu Po and it takes time to adjust. In the third I played a steady game, just kept the rallies going and she got tired.” It was a good day for China in Women’s Singles, with all their Women’s Singles players making the second round. Both Li Xuerui and Wang Shixian were taken to three games, by Indonesia’s Ruselli Hartawan and Korea’s Bae Yeon Ju respectively, while Wang Yihan averted that possibility against Canada’s Michelle Li by overturning a deficit in the second game.

“During the important times I lost focus but even so I think I did well,” said Michelle Li, who has had some injury trouble with her right knee in recent months. “I was able to get back and started to get closer. It’s a confidence thing. I’ve been injured for a while and it’s been hard to keep up and be consistent, but I’m getting better and my goal is Rio and this was a stepping stone.

“I think I need to focus on my mental side and hit the right shots at the right time. I had the lead in the second game and lost focus and lost a few points. It’s a mental thing, knowing what to do in certain situations and not making mistakes. Physically I can keep going but for some reason, at crucial times, those little mistakes happened and that changed the game.”

The local crowd got a jolt with the loss of Lindaweni Fanetri – TOTAL BWF World Championships bronze medallist at this venue – to Denmark’s Line Kjaersfeldt in a tight third game: 21-12 18-21 21-19.

Another loss was that of Yonex All England Mixed Doubles champions Praveen Jordan/Debby Susanto to China’s Lu Kai/Huang Yaqiong in straight games, 21-15 21-10. “As it’s been for many years, we’ve been fighting with the Chinese, and they put up new Mixed Doubles pairs all the time,” said Fischer. “Christinna and I came prepared today, we didn’t want to lose the first round. We played like it was on the weekend. I felt we played better and maybe a little tricky in the second game. I’m proud of our win today.

“We came prepared for this tournament. We have a big history here and we want to do well. I didn’t play the Thomas Cup because I wanted to stay home because I couldn’t see that I could do something special for the team. So I stayed home and practiced hard and stayed in shape when Christinna came back (from the Uber Cup). Maybe it’s good I stayed home, but when I saw they won the Thomas Cup on Sunday, then I would’ve loved to be there. But I have a bigger goal in the Mixed Doubles with Christinna.”

Five Chinese pairs made it to the second round, including Zhang Nan/Zhao Yunlei, who avenged their Celcom Axiata Malaysia Open loss to Chan Peng Soon/Goh Liu Ying, 21-18 21-17.