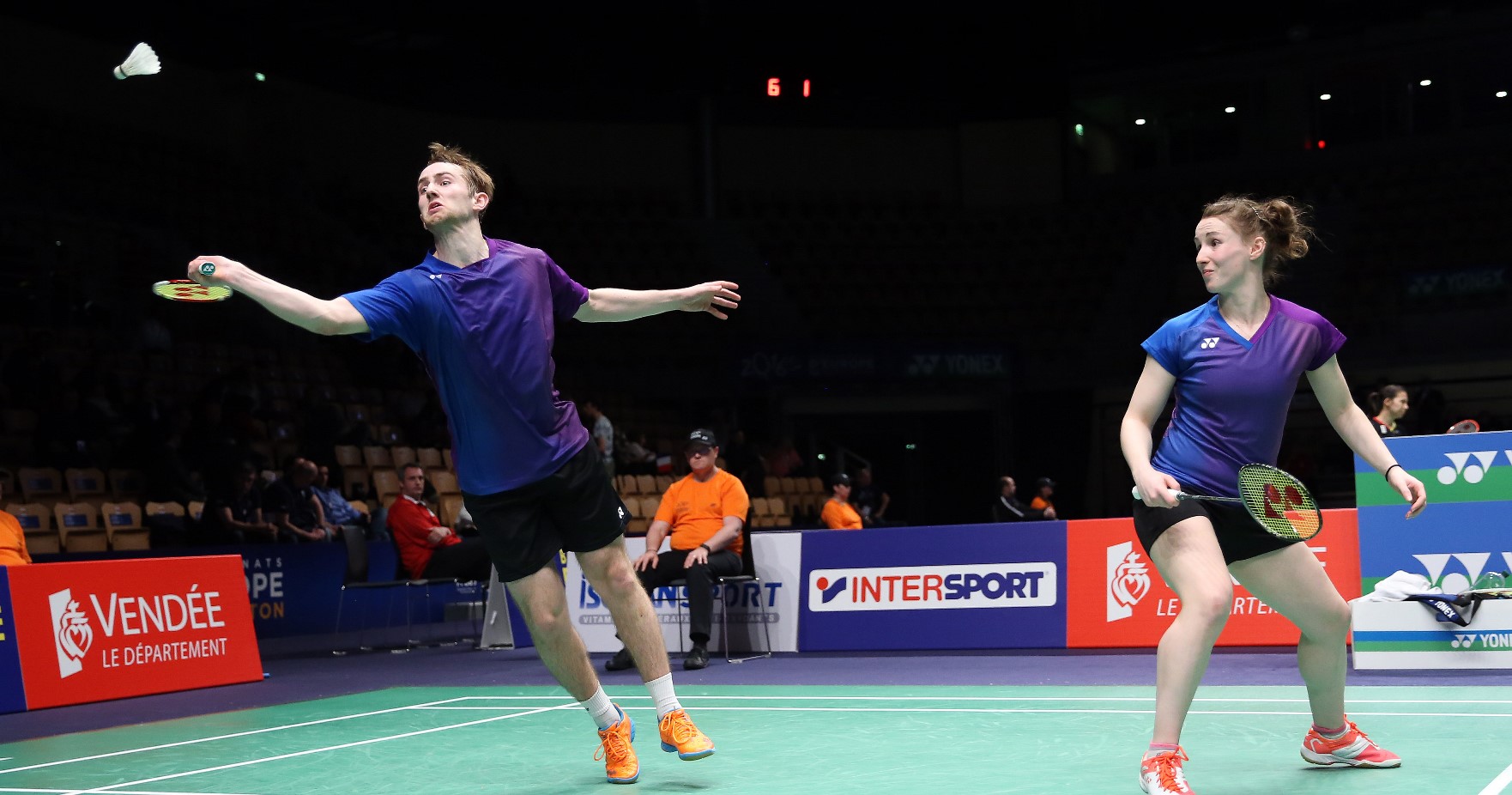 Ireland’s Chloe Magee enjoyed a memorable first round in the 25th European Championships yesterday, with gritty wins in Women’s Singles and then Mixed Doubles. Needing a sizeable haul of points in her quest for a third Olympic Games qualification, she dug deep in the day’s opening match to beat her English namesake – Chloe Birch – 21-19 18-21 21-12 in 66 minutes.

That effort was later superseded by her Mixed Doubles heroics (featured image) – in tandem with brother, Sam – as they ousted the No.4 seeds, Robert Mateusiak and Nadiezda Zieba. The Polish pair who lifted the European title in 2012 seemed to be heading into the second round, after coming from a game down and leading 17-15 in the decider.

However, they faltered badly to lose six of the next seven points and with that the match, 21-18 13-21 21-18, to be the first seeds to bid farewell to the event making its debut in France at Vendéspace in La Roche sur Yon.

“Chloe has been focusing on her singles these past few months and we have not even practised Mixed Doubles so this is a nice surprise to beat the former champions and fourth seeds,” said an elated Sam Magee. There was also a close call for another fancied Mixed duo as third seeds, Jacco Arrends and Selena Piek, saved a match point before squeezing past Gennadiy Natarov and Natalya Voytsekh. The Dutch beat their Ukrainian rivals, 20-22 21-14 22-20. By contrast, the two top pairs, Chris and Gabby Adcock (England) and title holders, Joachim Fischer and Christinna Pedersen of Denmark, easily advanced to the last 16.

Home fans also had much to cheer about as a pair of wildcard beneficiaries made the most of their good fortunes. Lucas Claerbout defeated his higher-ranked Men’s Singles opponent, Eric Meijs of the Netherlands (21-18 21-16), while his Women’s Singles team-mate, Yaelle Hoyaux, shocked Austria’s Olympic hopeful, Elisabeth Baldauf, 26-24 21-14.

The latter, 260 places ahead of Hoyaux in the world rankings, appeared in control of the first game but lost three successive points to let the Frenchwoman back in. A see-saw battle ensued with Hoyaux prevailing. Buoyed by the way things turned in her favour, the hometown player kept her calm to take the match in 42 minutes. “To come on court with all this fantastic support is amazing. It is a dream come true for me to play in my first European Championships and what a great call it was from Badminton Europe to give both myself and Yaelle wild cards,” declared a pumped-up Claerbout.

“The match itself was tricky as I know Erik very well but I could just feel the crowd behind me and I love to play in an atmosphere like that. The noise when I won was absolutely crazy.”

Apart from Claerbout’s victory, the other key upset in Men’s Singles was Yuhan Tan’s triumph over Erik Holst. Undaunted by a 5-1 head-to-head in the Dane’s favour, Belgium’s Tan conquered, 21-9 21-19, leading throughout the match.