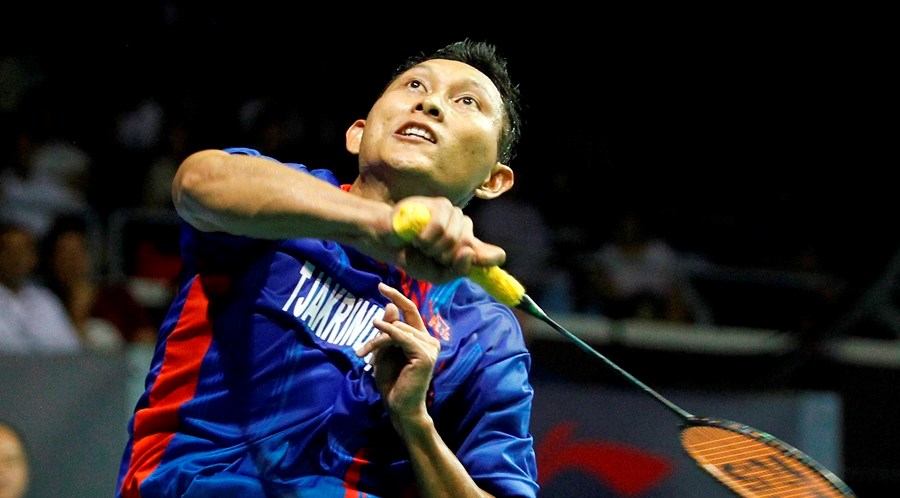 “I can still win!” was the exuberant declaration of former top player Sony Dwi Kuncoro who this evening shocked Lin Dan with a gritty victory in the OUE Singapore Open 2016 semi-finals.

The veteran Indonesian, who negotiated two qualifying rounds and then three matches that stretched the distanced, refused to wilt despite the aura of

arguably the best-ever Men’s Singles exponent across the net.

Urged on by his wife/coach, Gading Safitri, and boisterous clusters of his countrymen in the stands at Singapore Indoor Stadium, the 31-year-old wrestled his way to a 21-10 17-21 22-20 triumph and a shot of recapturing the championship he lifted in 2010.

Smacking a cross-court, forehand winner on his second match point, an overwhelmed Kuncoro dropped his racket, punched the air with both fists and fell to his knees before rushing to embrace his wife and accepting lengthy applause from thrilled Indonesian spectators.

“I didn’t have any particular tactics against Lin Dan. I just wanted to play my way and not get drawn into playing how he plays. I tried to be as aggressive as possible, especially in the third game after my level dropped in the second game,” said the 31-year-old.

“I told myself ‘This is it. I need to win this’. This is what I train for every day; to be prepared to beat players ranked higher than me. It’s been a long journey.” Having dominated the opening game, Kuncoro then saw his opponent grab the second game to ensure a decider. It proved a tug-of-war with neither player able to get out of reach of the other. Ultimately, a few critical errors by Lin Dan turned the match decisively; two shots into the net giving Kuncoro successive match points.

“This is my first Superseries final in a long time and I will try to stay calm. Today I tried to play long rallies rather than fast, straight kills. I tried to be more patient so that my opponent would get impatient and make more mistakes,” revealed Son.

Meanwhile, Thai sensation Ratchanok Intanon is one win away from celebrating a remarkable, three-week haul of trophies in India, Malaysia and Despite Akane Yamaguchi’s best efforts, the unstoppable Intanon romped into the final, triumphing 21-12 22-20 over her Japanese rival.  Earlier, Sun booked her second straight Singapore final with a solid performance against Chinese team-mate, He Bingjiao; 21-10 21-16 in 36 minutes.

Success against Sun would catapult Intanon to world No.1 for the first time in her career, surpassing Spain’s Carolina Marin in the rankings; an achievement that’s at the forefront of Intanon’s thoughts.

“I was world No.2 after I won the World Championship in Guangzhou and then my ranking went down. If I can win, it will be great to become world No.1,” said the 21-year-old, relieved to have negotiated a testing second game versus Yamaguchi.

Leading comfortably and showcasing her vast repertoire of skills, Intanon suddenly lapsed in concentration – a bad habit she had managed to resist for much of the previous two weeks – and sprayed the shuttle wide repeatedly. Sensing an opportunity to stretch the match, Yamaguchi raised her tempo. The scores were deadlocked 16-16, then 19-19 and even 20-20 before Intanon pulled through, punching the air on match point.

“When she came back in the second game, I tried not to show my nervousness. Tomorrow I will play Sun Yu who I have beaten before. I will try to relax and enjoy the match,” said Intanon. In Women’s Doubles top seeds, Misaki Matsutomo and Ayaka Takahashi of Japan, will also be in search of a third title this season, having stood atop the podium at the All England and retained their crown in India. They face Nitya Krishinda Maheswari and Greysia Polii of Indonesia who avenged last weekend’s defeat at the hands of Korea’s Jung Kyung Eun/Shin Seung Chan. The Japanese overcame World champions, Tian Qing/Zhao Yunlei of China.