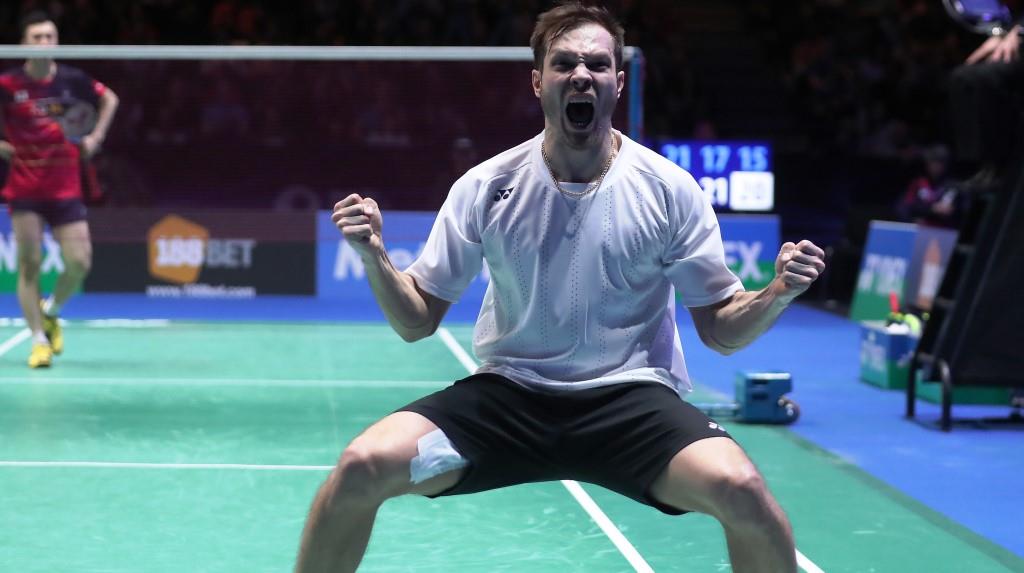 Danish nerves of steel and an intuitive display of serving by Christinna Pedersen broke the hearts of English fans whose hopes of home success at the YONEX All England Open Badminton Championships vanished in about five minutes of exhilarating action today. Leading 19-11 and then 20-15 in the second game, Chris and Gabby Adcock were perhaps already thinking about a third game when their Mixed Doubles European rivals conjured up a stunning comeback to snatch a semi-final victory in straight games: 21-13 22-20.

Having been all over the Adcocks in the first game with their speed and precision, the Danes looked a shadow of themselves in the second; mistiming, mis-hitting and even occasionally miscommunicating as the local favourites lifted their performance – and with it the noise level inside Barclaycard Arena. A net smash by Gabby brought up five game points and, as spectators settled in anticipating an exciting decider, what unfolded next was truly unbelievable; Pedersen stealing the show with some daring flick serves that caught the Adcocks off-guard.

In a blink, the score was 20-19, with England down to their last game point. The next few minutes were a blur as an erroneous line call – which would have squared the match – was overturned on instant review to lock the score: 20-20. Denmark then went to match point and sealed their great escape with a flurried 53-shot exchange that left the players and fans alike breathless.

Gutted and shell-shocked with disbelief, Chris and Gabby trudged off court as Fischer Nielsen and Pedersen deservedly revelled in their dramatic about-turn.

“It’s hard to describe our feelings. To win a semi-final at the All England and to win it like that. It’s amazing,” said a beaming Pedersen.

“I wasn’t thinking that much, just concentrating on my serve. It was a huge factor today. I changed my strategy just in time to flick serve. When you get to that stage in a match it’s about luck and who believes the most.”

Holding his head as he absorbed what they had just done, 37-year-old Fischer Nielsen hailed it a “crazy comeback” and said they now look forward to enjoying their first final in Birmingham.

By contrast, the Adcocks put on a brave face despite what Chris called an “awful ending”.

“It was good decision-making from them and bad from us. They are very experienced and this is what they can do to you.” The Danes will be up against the rising Praveen Jordan and Debby Susanto, who registered a magnificent first win over Chinese stalwarts, Zhang Nan and Zhao Yunlei. The young Indonesians routed the title-holders, 21-19 21-16, to ensure this year’s All England will have first-time winners in Mixed Doubles.

There will be first-time champions in Men’s Doubles also as Vladimir Ivanov and Ivan Sozonov pulled off a sensational upset against top seeds, Lee Yong Dae and Yoo Yeon Seong. Shaking off the loss of the first game, the Russians attacked fiercely in the second and third to blunt the usually lethal Koreans. When Lee pushed Sozonov’s serve into the net to give the opponents victory, thunderous cheering erupted for the unlikely heroes – 14-21 21-17 21-15 the score.

“It’s great. I can’t believe it – our first time beating the world No.1 pair and to be in the All England final! We are just so happy and we appreciate all the support from this crowd,” said Sozonov (featured image). He and Ivanov will vie for crown against Hiroyuki Endo and Kenichi Hayakawa. The Japanese – yet to win a World Superseries title though being among the top pairs for years – will be in their third All England showdown and are hoping the luck goes their way this time. They beat Malaysia’s Goh V Shem and Tan Wee Kiong, 21-13 21-15.

In Women’s Doubles, Japan’s Misaki Matsutomo/Ayaka Takahashi bossed their semi-final versus the Luo twins, taking down the Chinese top seeds 21-12 21-9. For their efforts, they face another pair from China, Tang Yuanting – who won this title last season with Bao Yixin – and Yu Yang. The latter came from a game down to triumph over Pedersen and Kamilla Rytter Juhl, 21-19 9-21 21-14.

“We are happy to be in the final and we are confident of winning tomorrow,” stated Yu.