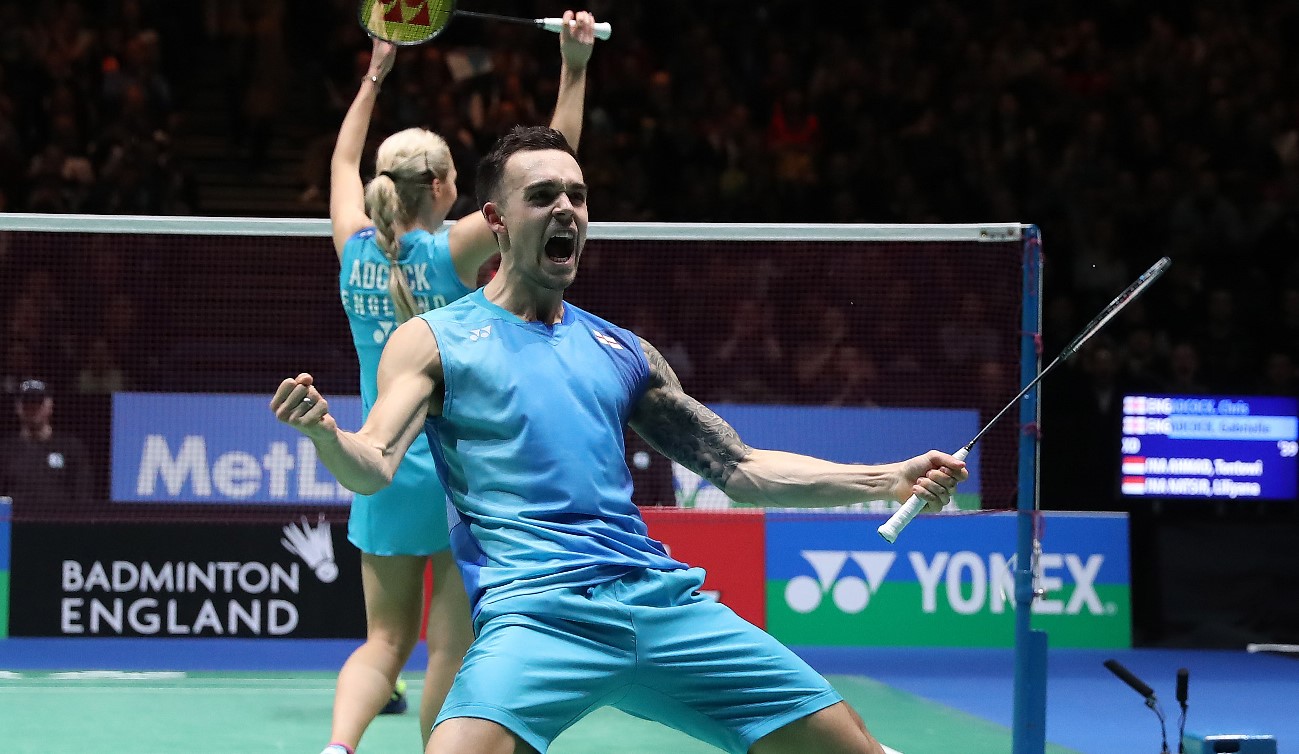 Chris and Gabby Adcock (featured image) raised English hopes of a title at the YONEX All England Open Badminton Championships for the first time in more than decade today, breezing into the Mixed Doubles semi-finals in Birmingham. In Women’s Singles, top seed Marin kept on course to retain her All England crown, winning 21-17 21-19 to clinch her maiden victory over the player who preceded her as World champion.

“It was a difficult match but I thought I played well. I prepared really hard with my coaching team for this match and I was able to execute my strategy. It’s a great feeling to finally beat her,” said the 22-year-old Spaniard who fought back admirably when Intanon looked to be pulling away in the second game.

Marin now tackles Nozomi Okuhara of Japan. The latter continued where she left off in the Dubai World Superseries Finals, again beating China’s Wang Yihan comfortably: 21-9 21-13. En route to the year-end honour, Okuhara also beat Marin twice and the All England queen will have a score to settle. The other semi-final pits Tai Tzu Ying (Chinese Taipei) against China’s Wang Shixian. Tai thwarted Saina Nehwal of India, 21-15 21-16, while the relentless Wang came from behind to topple Olympic champion and team-mate, Li Xuerui, 16-21 21-18 21-17. However, almost all the chatter at Barclaycard Arena was about the Adcocks’ clinical dismantling of three-time All England winners, Tontowi Ahmad and Liliyana Natsir, to reach the last four of their home tournament in the MetLife BWF World Superseries for the first occasion.

Another monster smash by Chris on match point was the exclamation mark on a devastating performance in which he played powerfully from the back while his wife dominated at net, showing great anticipation. Their 21-18 21-16 triumph in 40 minutes was just desserts for their heroics in front a boisterous, partisan crowd eager for them to emulate the 2005 feat of Nathan Robertson/Gail Emms – the last English winners at the All England and in the same category.

So thorough a performance was it that Chris was genuinely moved to declare: “That was brilliant. That’s about as good as we have ever played against them. It’s our most convincing win against the Indonesians.” Noting they have played “better and better” with each match, Gabby was equally pleased with their showing as they smothered their opposition into error-strewn submission. For all their experience and ability, Ahmad and Natsir had no answer to the English who grew in confidence with every point while frustration and despair mounted across the net.

Zhao was unable to maintain her two-pronged campaign as she and Women’s Doubles partner, Tian Qing, fell to Japan’s top duo, Misaki Matsutomo/Ayaka Takahashi, 21-6 13-21 21-15. The No.3 seeds will have to get past Chinese twins, Luo Ying and Luo Yu, to reach Sunday’s finale. Pedersen and Rytter Juhl passed a late-night test versus Korea’s Jung Kyung Eun/Shin Seung Chan (18-21 21-15 21-12) to seal an appointment with China’s Tang Yuanting and the experienced, Yu Yang. Reflecting on her successful week thus far and progressing to two semi-finals, 29-year-old Pedersen said: “It’s been amazing. Before the tournament we weren’t sure where our level was in the two events. Our preparation wasn’t so good because of small injuries that affected training.

“We still believed in ourselves because we knew if we played our best then our level would be high enough to win and we have focused on doing that. It’s a dream to be in two semi-finals here and, though it will be tough, we will fight tomorrow. I’m sure we can find an extra five to ten per cent for the All England semi-finals!” In Men’s Doubles, Zhang Nan also lost out on a chance for two titles as he and Fu Haifeng suffered a surprise defeat to Hiroyuki Endo and Kenichi Hayakawa. The Japanese are drawn opposite Malaysia’s Goh V Shem and Tan Wee Kiong tomorrow. The latter overcame their illustrious compatriots – Koo Kien Keat and Tan Boon Heong.

Top seeds Lee Yong Dae/Yoo Yeon Seong will be across the net from the towering Ivanov and Sozonov in the other semi-final.