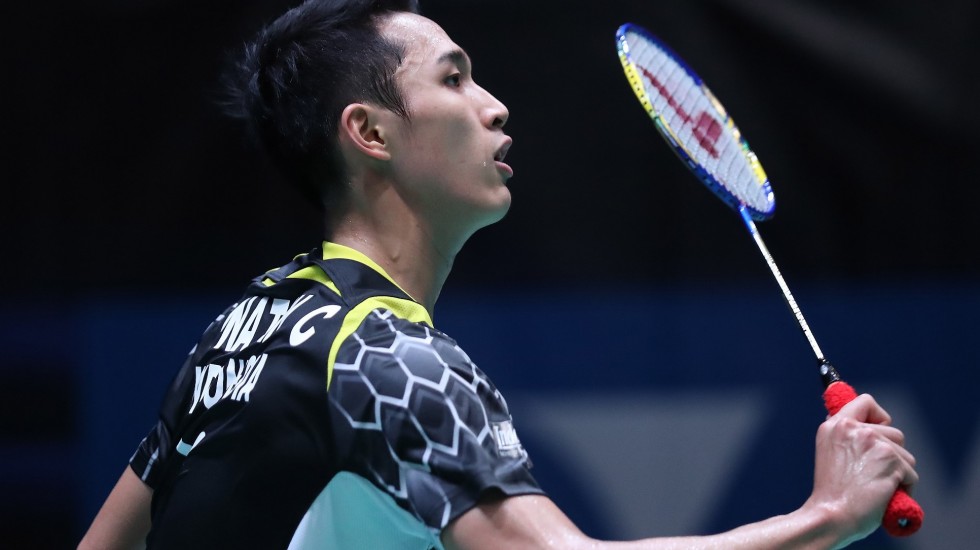 Jonathan Christie achieved another milestone in his blossoming career, advancing to the Men’s Singles main draw at the YONEX All England Open Badminton Championships today – in his maiden outing at the prestigious event.

The elated Indonesian swept aside his compatriot, Ihsan Maulana Mustofa, 21-12 21-17, in the second phase of qualifying action this evening. That victory sealed a date with Japan’s Kento Momota in tomorrow’s first round. Earlier, Christie disposed of Ryan Jing Quek of England (21-7 21-10) as he set his sights on fulfilling a cherished dream in this year’s MetLife BWF World Superseries. “I have watched the All England for many years on TV – even last year – and now here I am playing in it!

“I am really excited, especially as it’s my first time here. This stadium is big and has an excellent atmosphere. It’s great to finally experience this. It’s a famous tournament,” said the 18-year-old of the event being held at the Barclaycard Arena.

Looking ahead to his clash with the stylish Momota who finished 2015 clutching the coveted Dubai World Superseries Finals trophy, Christie was quietly optimistic.

“I have never played him. I am looking forward to it and I hope I can upset him. I have to be prepared for a long match if necessary, maybe an hour or more. He (Momota) is a smart, complete player who has a lot of shots.”

Meanwhile, in other Men’s Singles qualification, Brice Leverdez of France showed no neighbourly kindness to Pablo Abian, fighting back to oust the Spaniard, 14-21 21-16 21-12. India’s Sameer Verma downed Vladimir Malkov of Russia, 21-16 21-11, and Kenta Nishimoto of Japan breezed past Chong Wei Feng of Malaysia (21-10 21-17). Elsewhere the misery continued for former Men’s Singles ace, Kenichi Tago, who fell at the opening hurdle to Mustofa (21-14 21-14). Women’s Singles welcomed back Beiwen Zhang who returned to elite badminton after a lengthy injury lay-off. Drawing a bye in first-round qualification, the American defeated Chinese Taipei’s Chen Hsiao Huan (21-13 21-14) to earn a berth opposite Minatsu Mitani of Japan tomorrow.

Also progressing to the main draw were former top junior, He Bingjiao of China; Hong Kong’s Yip Pui Yin; and Germany’s Olga Konon. Yip held off Kristina Gavnholt of the Czech Republic, coming from a game down to win 16-21 21-10 21-11. Marvin Seidel of Germany savoured success in both Men’s Doubles and Mixed Doubles, qualifying for the main draw with his respective partners, Mark Lamsfuss and Linda Efler. Seidel and Lamsfuss came through 20-22 21-13 21-19 versus hometown hopefuls, Peter Briggs/Tom Wolfende, in the day’s last match.