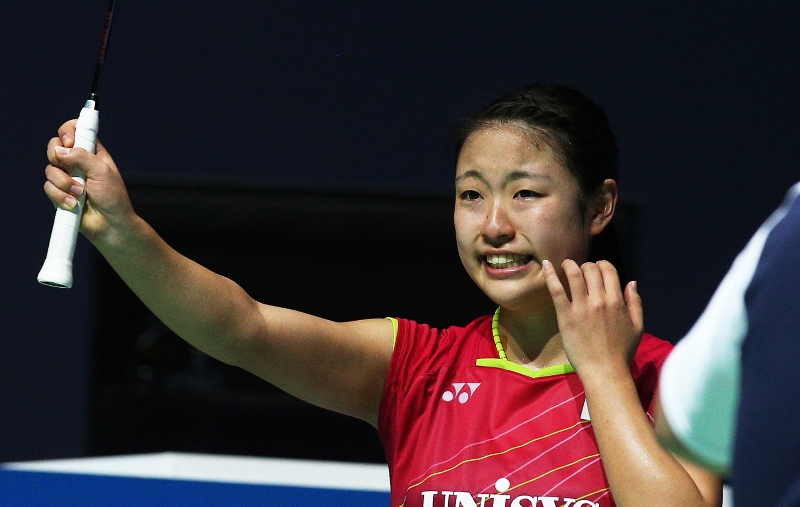 Japan achieved an unprecedented sweep of the singles titles at the Dubai World Superseries Finals, with young stars Kento Momota and Nozomi Okuhara making it a grand double.

Momota enjoyed a one-sided win over Denmark’s Viktor Axelsen after Okuhara had emerged victorious from a difficult battle against China’s Wang Yihan.

Okuhara produced another defensive masterclass in breaking down Wang, winning the Women’s Singles title without having dropped a game all week. It was a contest between the sharp-shooting Wang and Okuhara’s defensive fortress. The Japanese had the advantage nearly each time on a long rally; Wang tried to pick off her opponent with her fierce strokes down the flanks and her signature forehand slice, with which she was able to poke a few holes.

The match ebbed and flowed; Okuhara threatened to run away with the match at 14-6, but Wang fought back and caught up at 16. Wang had game point but Okuhara enjoyed two slices of luck with the shuttle clipping the tape; she closed it out by trapping Wang deep in her backhand corner.

The pattern reversed in the second game with Wang jumping ahead, 15-9. It was here that the Japanese’s great reserves of mental fortitude came to the fore; point by point she reeled herself in, keeping the shuttle going in marathon rallies until the former World champion appeared visibly drained. Six straight points gave Okuhara the title; Wang caught in another interminable rally, was rooted to the spot as Okuhara found the winner.

“I wasn’t moving well as I was fatigued and not able to give 100 percent,” said Okuhara.

“But I wanted to keep myself strong. It was a tough game. I’m happy I could recover emotionally in the second game despite losing a string of points. All year I have been thinking of winning this title. It had been emotionally very difficult. There was a period when I couldn’t play, and all those thoughts came to me when I won the final point.”

Axelsen’s precision that he demonstrated so well against Chen Long missing today in the Men’s Singles final. The Dane was constantly frustrated by his soft errors and never got going. The match slipped away early and the Dane was not quite able to show the patience to work his way back in.

“I watched Axelsen yesterday and he played close to perfect,” said Momota. “I had a specific strategy against him and it worked. I felt I was lucky on a few points.”

Axelsen conceded that his semi-final win over Chen had taken too much out of him.