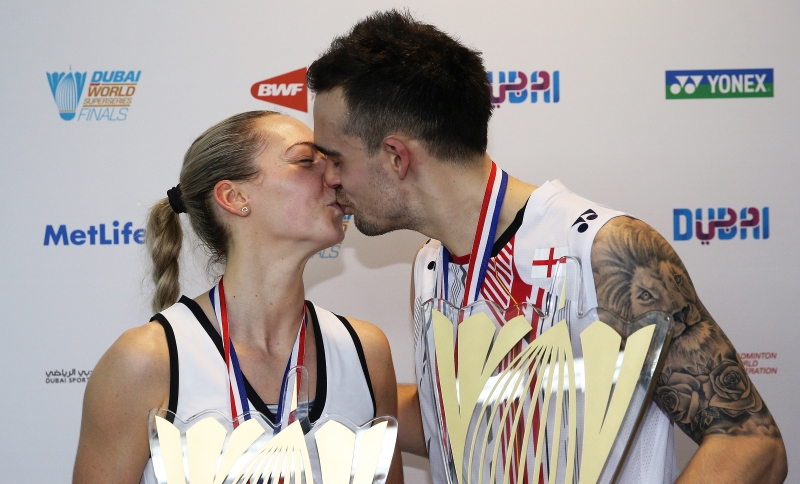 Few would have given the England pair much of a chance at the start of the week, but, starting with their upset of Indonesia’s Tontowi Ahmad/Liliyana Natsir, the Adcocks got stronger as the event progressed. On Sunday, facing a pair they’d never beaten in three matches – Ko Sung Hyun and Kim Ha Na – Chris and Gabrielle played a tactically astute game that gave the Koreans no breathing space.

From stifling the Koreans with their command of the net, giving Ko few opportunities to unleash his smash, to controlling the rallies from the service and return situations, the Adcock couple didn’t put a foot wrong.

The Koreans put up a better fight in the second game, but the Adcocks played cleverly at the death, frequently using the flicked serve to Kim Ha Na and wresting the advantage. They needed only one of their three match points to take the title, 21-14 21-17.

“We were focussed all week and fought very hard,” said Chris Adcock. “I could feel my legs going towards the end but got them back.”

“We were very clinical in our shotmaking,” said Gabrielle. “Ko has the biggest smash, we had to prevent him from getting too many opportunities. It was a cat-and-mouse game all the way.” The Women’s Doubles final saw Denmark’s Christinna Pedersen and Kamilla Rytter Juhl wrest the early advantage with their relentless attack, but by the second their game had started to show signs of trouble. The Luo twins were 14-4 ahead in the third when the Danes decided to retire. The 14-21 21-9 14-4 result gave Luo Ying and Luo Yu their second Superseries title after the Malaysia Open earlier this year.

“When Christinna woke up this morning she had a bad feeling in her stomach,” said Juhl. “There was no energy left. We came out attacking and gave it everything we had, but she couldn’t go on.” The Men’s Doubles final was fiercely contested, with China’s Chai Biao and Hong Wei giving World champions Ahsan and Setiawan a run for their money. With Hong’s blistering smashes unreturned, the Chinese established a vice-like grip on the proceedings.

However, the Indonesians worked their way back in, regaining the initiative with their control of the front court, and by the third the Chinese had no answers to Ahsan’s quick interceptions and Setiawan’s cleverness in opening the court. The 13-21 21-14 21-14 result gave them their first title since winning the World Championships at home.