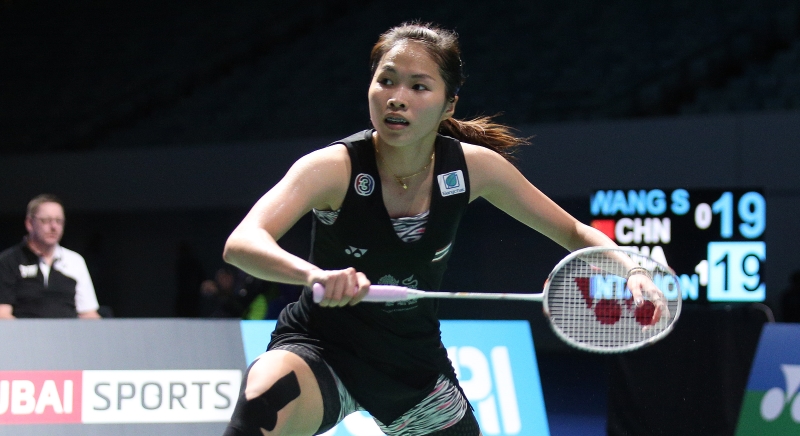 Carolina Marin squeezed into the semi-finals of the Dubai World Superseries Finals despite a straight-games loss to Nozomi Okuhara today.

The World champion was whipped 21-9 21-15 by her Japanese challenger and on the brink of elimination from Group A. India’s Saina Nehwal, who had beaten her yesterday, was favoured to get the better of the out-of-form Tai Tzu Ying and book her semi-final place, but Tai did Marin a huge favour with a magical display to outclass Nehwal 16-21 21-18 21-14. The Indian started strongly, moving well and hitting powerfully. Tai, typical to her style, was too adventurous in going for the lines and the errors piled up. The first game under her belt, Nehwal looked set for a semi-final place.

But Tai then unveiled one of her most arresting performances; the racket turned into a wand with which she coaxed the shuttle through narrow spaces and impossible angles. Time and again she caught Nehwal flat-footed with outrageous flicks and dabs; her favoured slow drop looping into the tightest corners forced the Indian to run the extra distance. Midway through the game, with Nehwal inching close, Tai played a sensational pick up off the floor to a Nehwal net shot that had skimmed the tape; the Indian could only shrug in despair. challenge. Towards the end, Nehwal had no fight left against an opponent who seemed to have innumerable tricks up her sleeve.

“I wasn’t expecting much today,” said Tai. “I just played without thinking too much.”

Nehwal complimented her opponent’s vast repertoire. “She’s very tricky, she has so many quality shots that are deceptive. I was tired after the first game, especially since I had a long match yesterday and my legs felt heavy.”

Nehwal finished behind Marin in her group as the Spaniard had better game difference.

In Men’s Doubles, Mohammad Ahsan and Hendra Setiawan made the the semi-finals by decimating Zhang Nan/Fu Haifeng.

The World champions were in a must-win situation today against a pair that has beaten them four times in a row. However, the Chinese were a shade below their normal ebullient selves and Ahsan and Setiawan dictated proceedings from the start to fashion a 21-14 21-16 result. The Indonesians finished below defending champions Lee Yong Dae/Yoo Yeon Seong in Group A, while in Group B, Denmark’s Mathias Boe/Carsten Mogensen emerged on top beating China’s Chai Biao/Hong Wei 21-18 21-19 in just 37 minutes. Despite the loss, Chai/Hong finished second in the group and made the semi-finals. An injury to China’s Zhao Yunlei saw her exit the tournament in both categories – Women’s Doubles (with Tian Qing) and Mixed Doubles (with Zhang Nan).

Indonesia’s Praveen Jordan/Debby Susanto were dominant over Denmark’s Joachim Fischer Nielsen/Christinna Pedersen, 21-8 21-18, to seal their Mixed Doubles semi-final place from Group B. Korea’s Ko Sung Hyun/Kim Ha Na then got the better of Liu Cheng/Bao Yixin, 21-18 13-21 21-18, ensuring that no Chinese pair remained in the hunt in the category.