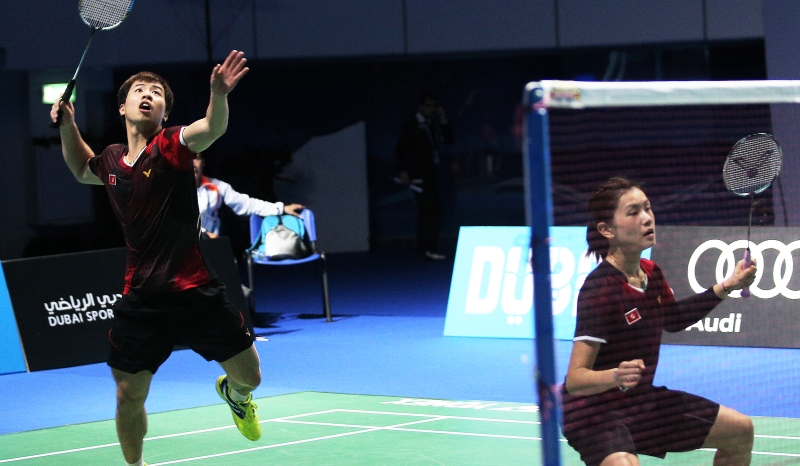 The Chinese top seeds, who had lost just four matches this year, appeared totally off-colour as they went down to Hong Kong’s Lee Chun Hei/Chau Hoi Wah in their Mixed Doubles Group A match in the day’s opening session. The 21-15 21-12 was their worst loss of the year; at 32 minutes, it was the least resistance they had offered in a loss.

“Maybe we were a bit tired. We weren’t 100 percent. I wasn’t feeling too good on court.” said Zhao.

A delighted Chau said she and Lee had executed their plans well.

“We did our best, we’re glad we performed well, not just that we won, but that the understanding between us was good, we executed what we had planned to do. They are very tough, so for us, it was about preparing ourselves for the worst and hoping for the best! There was less pressure on us and we tried to enjoy the match as much as possible. Our form this year has been a bit bumpy, there’s a lot we need to improve on.” Women’s Singles top seed Carolina Marin eased to a solid start, beating defending champion Tai Tzu Ying (Chinese Taipei) 21-16 21-9 in Group A. The World champion had things under control all through the match, helped by Tai’s inconsistency and inability to sustain pressure on the favourite. “I wanted to keep the shuttle in and not make mistakes,” said Marin.

“The shuttle was slow and I wanted to keep the pace high. I think she made mistakes in the beginning of the second game, and she got tired after some long rallies. She’s really difficult to play, has some good strokes, and I need to pay more attention to that. I don’t think anyone else plays her style. She has really good quality from the back court and at the net.”

Saina Nehwal had plenty of support, but the Indian failed to live up to expectations against Japan’s Nozomi Okuhara. Nehwal had her chances in the first game, but Okuhara characteristically stonewalled everything and then routed her opponent in the second game, 21-14 21-6.

“I haven’t played at all over the last three weeks as I’m recovering from a right Achilles injury,” said Nehwal.

“I didn’t have much of a chance today. Nozomi was everywhere; she was much quicker and I was a bit late in reaching for the shuttle. The slow conditions favour her style too.”

Men’s Singles Group A saw Denmark’s Jan O Jorgensen beating Hong Kong’s Hu Yun 21-10 23-21, while his compatriot Viktor Axelsen too managed a quick result over Chinese Taipei’s Chou Tien Chen, 21-8 21-16 in Group B. Kidambi Srikanth, who had a fair-sized crowd cheering for him, could not find the tools to break past Japan’s Kento Momota. In Men’s Doubles, the closest match of the day was between Korea’s Kim Gi Jung/Kim Sa Rang and China’s Chai Biao/Hong Wei. The Koreans did well to close at 15-19 deficit in the third and hold two match points, but Chai and Hong kept themselves in the game and finished winners at 21-15 12-21 24-22. Christinna Pedersen lost her second close match of the day when she and Kamilla Rytter Juhl blew a couple of opportunities to beat World champions Zhao Yunlei/Tian Qing in Women’s Doubles Group B. The Danes had an 18-12 lead in the third but saw the Chinese gain rapidly on them with five straight points. They had two match points at 20-18 but Zhao and Tian were solid under pressure, not giving the Danes a whiff of a chance, grabbing four points in a  row to take the match 16-21 21-7 22-20.