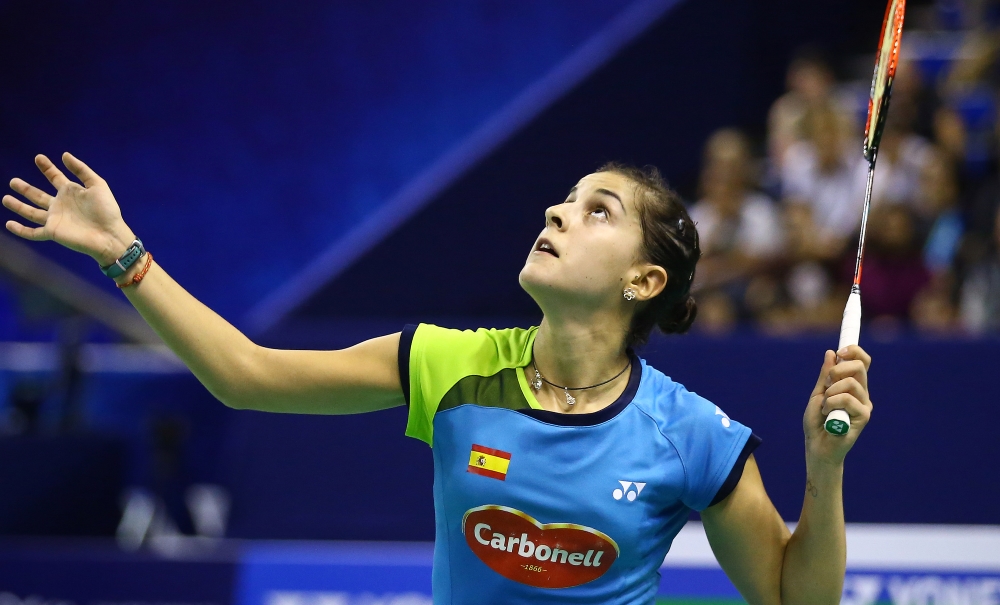 The eight seats in five categories are fully booked as the flight for the Dubai World Superseries Finals takes off.

Last week’s Yonex-Sunrise Hong Kong Open, the final stop in the 12-strong MetLife BWF World Superseries circuit, was the last opportunity for the aspirants to the Dubai trip. The week’s proceedings did not see any major shake-up in the standings, but some players and pairs were unlucky to miss out by a few points. China’s Lin Dan and Spain’s Carolina Marin (featured image), who missed the event last year, have made the list this time.

China’s Chen Long was the outstanding Men’s Singles player of 2015 and enjoyed a clear lead all through the season. Olympic champion Lin Dan, who has often expressed his wish to play in Dubai, comfortably made it despite a second-round loss in Hong Kong, but his compatriot Tian Houwei missed out as only two players from a member association are eligible to contest. India’s Kidambi Srikanth was lucky to make the list as he had just 200 points more than the 10th-placed Tommy Sugiarto of Indonesia.

Malaysia’s Lee Chong Wei, despite winning the last three World Superseries events, did not have enough points following losses in Korea and Denmark upon his return to the circuit. Spain’s Carolina Marin had a standout year, leading the Destination Dubai Rankings with 77,470 points, ahead of No.2 Wang Shixian and No.3 Wang Yihan.

This was a year in which Women’s Singles emerged as possibly the most exciting of the five categories, with a diversity of nations and styles in the top 15. Wang Shixian and Wang Yihan qualified ahead of Olympic champion Li Xuerui, who, after dominating in 2014, won her first Superseries of 2015 only in October.

Japan’s Nozomi Okuhara had the biggest upswing in performance, capped by a home Superseries win in Japan and a runner-up place in Hong Kong. India’s Saina Nehwal, who enjoyed a bright spell of form; Chinese Taipei’s Tai Tzu Ying, the defending champion; Thailand’s Ratchanok Intanon and Korea’s Sung Ji Hyun are the others who have qualified. Korea’s Lee Yong Dae and Yoo Yeon Seong might not have won the World title but they swept half of the Superseries titles on offer. The Koreans enjoyed a stunning run with four successive Superseries wins – Japan, Korea, Denmark and France – besides wins in Australia and Hong Kong. Lee and Yoo accumulated more points – 84,410 – than any other top-placed player or pair in the Superseries. Compatriots Kim Gi Jung/Kim Sa Rang finished strongly and might be the dark horses in Dubai.

Indonesia’s Mohammad Ahsan and Hendra Setiawan were off the boil after winning the World title at home, while Zhang Nan/Fu Haifeng (China) came close but could not win a Superseries title this year. China’s experimentation with various pairs meant that its strong pairs such as Tian Qing/Zhao Yunlei, Yu Yang/Tang Yuanting and Ma Jin/Tang Yuanting could not qualify on points. Tian and Zhao, however, as reigning World champions, were eligible for a wild card entry. Only two pairs got the better of World champions Zhang Nan/Zhao Yunlei in Superseries finals this year: Chinese compatriots Xu Chen/Ma Jin and Denmark’s Joachim Fischer Nielsen/Christinna Pedersen. For the most part, the reigning World and Olympic champions had another glorious year, winning six Superseries. Korea’s Ko Sung Hyun/Kim Ha Na won back-to-back Superseries in Denmark and France, while Indonesia’s Praveen Jordan/Debby Susanto emerged as a strong second pair to Tontowi Ahmad/Liliyana Natsir. Zhang/Zhao are favourites to defend their crown, but it will be anything but a cakewalk for them in the face of such opposition.