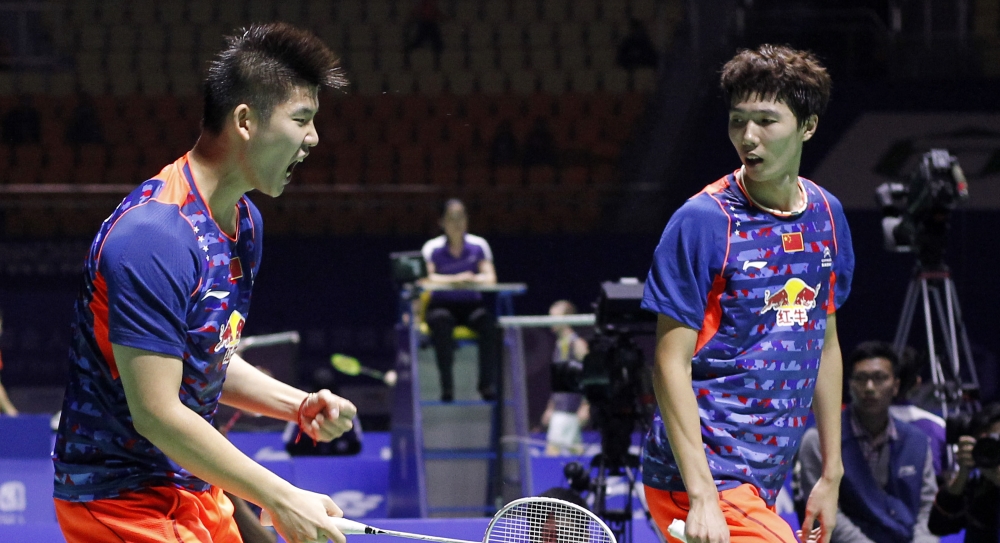 Top seeds Lee Yong Dae and Yoo Yeon Seong’s title-winning streak came to an abrupt end in the second round of the Thaihot China Open 2015 today. But the biggest upsets were in Men’s Doubles. Lee and Yoo appeared to have escaped out of a hole when they saved three match points and held one of their own, but Li and Liu refused to let go and scrambled home on their fourth opportunity. Wang Yilv/Zhang Wen had it easier against the reigning World champions; they recovered from a first game loss to win the next two 21-11 21-14. Defending champion Saina Nehwal struggled into the Women’s Singles quarter-finals, but her Indian compatriot PV Sindhu fell in a cracker of a contest.

Sindhu’s three-game match against local hope Wang Shixian was one of the highlights of the day, with Wang emerging victorious after a bruising 88 minute-battle, 18-21 21-18 21-16.

Nehwal was taken the distance by Malaysia’s Tee Jing Yi. Groin trouble had reportedly affected Nehwal in Denmark and France, but she said it wasn’t so much the injury as her trouble in reading Tee Jing Yi’s shots.

“She’s a tricky player to read; she plays the crosscourt and down-the-line with the same action,” Nehwal said. “I’ve started working on my injury with a trainer, but it’s too early to say whether it’s working.”

Sindhu’s match against Wang Shixian was as fiercely contested as fans might have anticipated. The Denmark Open runner-up started off brilliantly, with pace, power and anticipation as she defanged Wang’s best shots. But with Wang working her way back with typical grit, the match was poised on the edge all through. Sindhu made the critical error by serving into the net with the end in sight; it was the kind of day when such mistakes would not go unpunished. Shixian was accompanied into the quarter-finals by her teammates Li Xuerui and Wang Yihan – Li faces Korea’s Sung Ji Hyun while Wang Yihan takes on Chinese Taipei’s Tai Tzu Ying.

In Men’s Singles, China’s Chen Long and Denmark’s Viktor Axelsen set up their fourth meeting this year with contrasting victories. While Chen was unflustered during his 21-5 21-8 demolition of Chinese Taipei’s Hsu Jen Hao, Axelsen had his edgy moments against Hong Kong’s Wong Wing Ki before snatching a 21-14 19-21 21-19 victory. The big surprise in this category was the loss of No.8 seeds Lu Kai/Huang Yaqiong (China) to Denmark’s Niclas Nohr/Sara Thygesen, 21-14 21-17. The Danes take on No.3 seeds Xu Chen/Ma Jin, also of China.