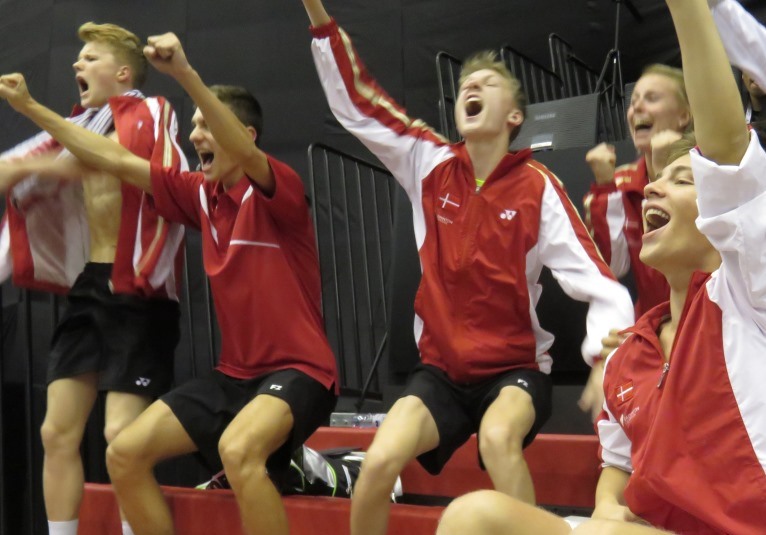 Denmark delivered the first resounding shock of this year’s Suhandinata Cup, beating No. 2 seeds, Korea, today to advance to the quarter-finals versus Chinese Taipei later tonight in Lima, Peru.

So often the lone rangers taking on the might of Asian powerhouses in the sport, the Danes clinched the tie with a match to spare as Women’s Doubles pair, Julie Dawall Jakobsen and Amalie Magelund Krogh, withstood the twin force of Seong Ah Yeong and Seong Na Yeong, 12-21 21-18 13-21; sparking celebrations among their coaches and team-mates (featured image).

“I think we have done really well. We knew it would be tough against Korea and I’m really happy that we won and are in the top eight,” said Denmark’s Men’s Singles hero, Anders Antonsen, who played his part with a polished 21-11 21-18 triumph over Kim Moon Jun.

“I started really quickly and controlled the first game. I lost concentration a bit in the second, but I played smarter than him when the score got close. It was a good match.”

Korea’s only success came in Women’s Singles as Shim Ye Rim fought back to oust European Junior champion, Mia Blichfeldt, 12-21 21-9 21-17; using the towering Dane’s height against her with some deft drop shots in the closing stages. Nonetheless this was but a small blip and could not dampen the winning team’s euphoria at how they had demolished the 2013 World Junior Mixed Team champions.

“The players did extremely well. We were in a difficult group with Korea and I’m very happy that we have won. To be in the top eight is great,” declared head coach, Bø Mosegaard. He is now hoping for a “close match” against Chinese Taipei tonight to determine the Group D winner who will secure a semi-finals berth. The Taiwanese blitzed England 4-1 in their final sub-group D2 encounter.

Another final-four place will be decided between China and Malaysia. The latter proved superior to India in sub-group A2, winning 4-1 this morning, to advance to the Group A showdown versus China who prevailed in sub-group A1.

As expected Japan and Hong Kong will meet for Group B top honours while the last semi-final position will go to either Indonesia or Thailand. The latter stopped Spain’s run in sub-group C2 with a 5-0 rout today while the Indonesians continued their strong showing in the other half, beating Singapore 4-1 to seal first place in sub-group C1.

Hosts, Peru, were also in the spotlight at the High Performance Center – Videna as they enjoyed a 5-0 drubbing of South American neighbours, Chile, in sub-group C1; much to the delight of home fans. Another Pan American nation, Guatemala, savoured a 3-2 success over Macau in sub-group B1. Players are enjoying watching the Suhandinata Cup 2015 just as much as they are competing in it.