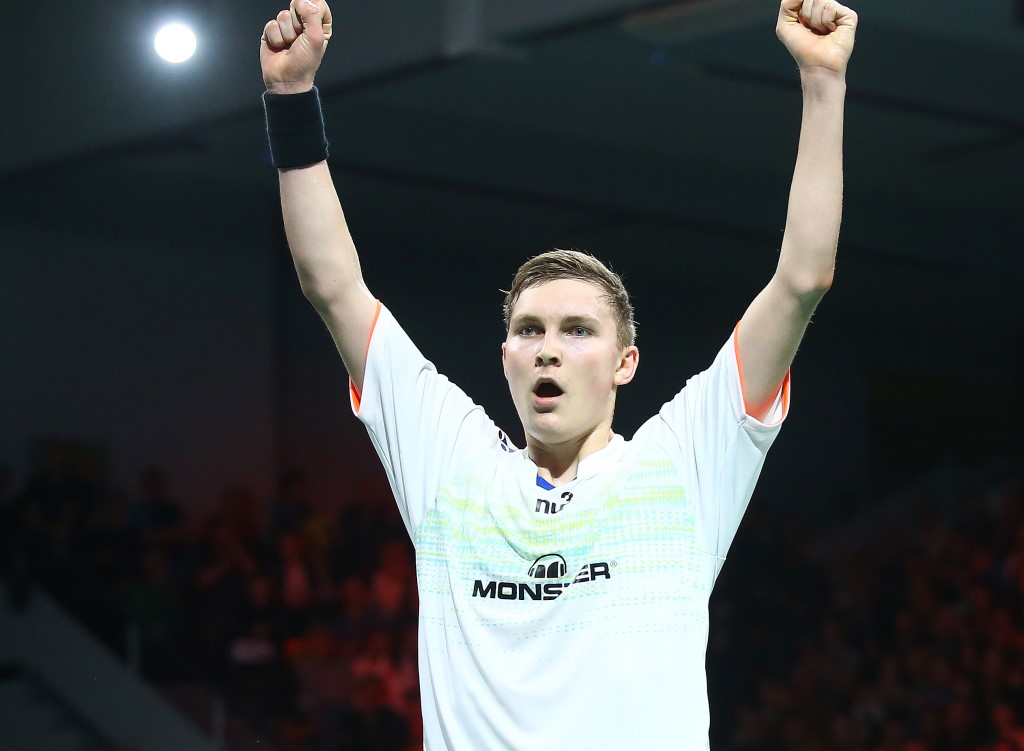 In an uncanny role reversal, a fired-up Viktor Axelsen produced a masterful display versus the king of badminton – Lin Dan – to blaze into the semi-finals of the Yonex Denmark Open 2015 tonight.

Taking the court in front scores of Odense residents who have known him since he was a boy, the town’s favourite badminton son – who has matured into a genuine contender in top-

flight competition over the past season – made his Danish compatriots proud, blitzing the two-time Olympic champion, with an emphatic 21-8 21-7 victory in just 36 minutes.

There was standing room only inside the compact Odense Sports Park as the usually respectfully appreciative Danes transformed into a noisy frenzy, cheering and shouting as Axelsen tore apart his esteemed rival. The Chinese champion, looking slow and lethargic, had no answer for the barrage of shots raining from his opponent’s racket.

Smashes, deft net play, great defence and even better attack – the impressively improving repertoire of Axelsen’s arsenal was mercilessly unleashed on the poor version of Lin Dan who showed up for this showdown.

“I wanted to do well here at home. My attack was really good and I didn’t let him play his game,” said the clearly jubilant winner.

“I got in as many changes of pace as I could and I didn’t let him into the match. That was the key.”

Whether it was too many errors – Lin Dan’s blunt reason for the loss – or just that Axelsen was too good and too fast on the night, the crowd cared not. They got the result they wanted. This major coup was sandwiched in between two other quarter-final successes for the hosts. Mixed Doubles stalwarts, Joachim Fischer-Nielsen/Christinna Pedersen, led the Danish procession into the semi-finals while a fiery performance by Mathias Boe and Carsten Mogensen in Men’s Doubles closed the evening perfectly. The latter resisted all that China’s Chai Biao and Hong Wei threw at them; Mogensen sealing the 23-21 23-21 outcome with a towering smash.

In between, there was disappointment for Denmark’s other Men’s Singles top gun, Jan Jorgensen, and for Pedersen and Kamilla Rytter Juhl in

Women’s Doubles. Jorgensen fell in straight games to Tommy Sugiarto, 21-19 21-19, having wriggled out of danger versus Sugiarto’s Indonesian compatriot, Dionysius Hayom Rumbaka, in the second round. Meanwhile, the Danish women suffered a repeat of their World Championships final defeat to Tian Qing/Zhao Yunlei. The verdict this time: 22-20 21-19.

Elsewhere, Chen Long stayed on course to retain his Men’s Singles title, with a 13-21 21-13 21-16 comeback over Hong Kong’s Wei Nan; India’s PV Sindhu continued her encouraging Women’s Singles resurgence, beating Wang Yihan of China, 21-18 21-19; and Liu Cheng’s amazing run in two disciplines rolled into another day. The latter advanced in both Mixed Doubles and Men’s Doubles with his respective partners. “I am really happy to be recovered and in my first Superseries semi-final this year. It’s great to be back and playing well,” said 20-year-old Sindhu, who was sidelined for much of 2015 with a left-foot injury.

Chou Tien Chen of Chinese Taipei won his battle with another emerging talent, taking down Japan’s Kento Momota, 21-19 20-22 21-15, in 86 minutes. Their sapping encounter hinted this may be one of the Men’s Singles rivalries of the future. Also, noteworthy were the fighting qualities of Ko Sung Hyun and Kim Ha Na of Korea, rebounding from a game down to oust No. 3 seeds, Xu Chen and Ma Jin of China, in Mixed Doubles.