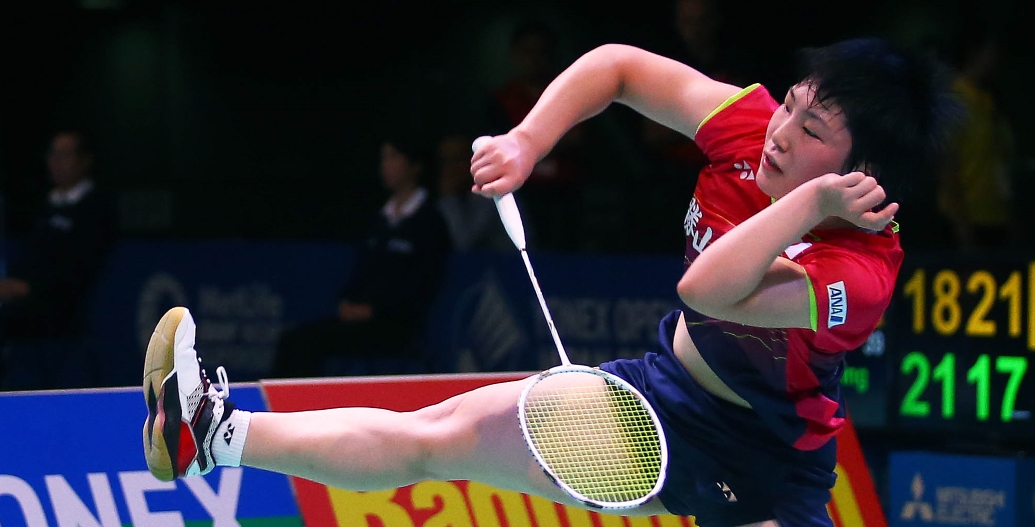 bit the dust at the Yonex Open Japan 2015 today.

It was a day when the Chinese Women’s Singles fortress, formerly impregnable, was under attack, as it has been in recent times. The big three of Chinese badminton – Li Xuerui, Wang Yihan and Wang Shixian – were on adjacent courts in the quarter-finals, taking on younger challengers from Japan (Akane Yamaguchi), Chinese Taipei (Tai Tzu Ying) and Spain (Carolina Marin) respectively: a classic instance of the current status of Women’s Singles badminton with China being tested to the limit in a discipline which they had dominated for long.

With the variety and styles on offer, it was a feast of badminton. The lanky Li was pitted against the much shorter Yamaguchi; Wang Yihan had to contend with the wristy trickery of Tai Tzu Ying, while Wang Shixian was up against the hustle and aggression of Carolina Marin.

If there was one thing Yamaguchi and Tai did well, it was to run down every shuttle that came through steep angles from their tall opponents. Yamaguchi set up the game well with a few deceptive loopy drop shots that caught Li by surprise and left her unsure for much of the first game; the Olympic champion recovered well, but the second and third games were all punch and counter-punch. Yamaguchi  (featured image), despite being dwarfed by Li, caught her numerous times with her whippy smash that Li could not put a racket to and she eventually went down 21-19 13-21 21-16.

On the next court, Tai (right) had maintained a lead over Wang Yihan, and with things under her control, showed some of her sublime racket skills, delaying each shot to keep Wang guessing. Wang had to chase the shuttle for most of the game, and even though she did take the match to a decider, the effort had taken its toll, for she had no answers left in the third: 21-18 17-21 21-13.

It was left to Wang Shixian, therefore, to keep China’s challenge alive, and she did.

Although top seed Marin had her chances, it wasn’t to be her day. Wang, despite long matches in her previous rounds, was able to keep her consistency, while the Spaniard faltered with her touch.

The remaining semi-final spot was taken by Nozomi Okuhara, who won an all-Japanese quarter-final over Minatsu Mitani, 21-16 18-21 21-15. The Danes appeared particularly relieved after their first win (21-16 21-12) in a while over a top Chinese pair.

“We had good tactics from the beginning,” said Pedersen.

“We talked to Kamilla (Rytter Juhl) before the match; we were talking about stepping forward to the net. If we’re not doing that, it’s difficult to defend them. So we were searching for the momentum and the attacking game today and I think it succeeded really well.”

Fischer, who has been ill with a stomach infection since the World Championships, conceded that it was a boost to have beaten a pair that has had the upper hand over them in the last five encounters. “We know they are so strong. We know we beat them today but next time it will be difficult again. They are young and motivated. That’s been the difference the last couple of times. We lost too many times to them, that’s not normal for us to lose many times to opponents. So we came well prepared today,” said Fischer.

It was a good day for Japan, with Yamaguchi and Okuhara in Women’s Singles, and Hiroyuki Endo/Kenichi Hayakawa and Shizuka Matsuo/Mami Naito in the paired events featuring on semi-finals day.

In Men’s Doubles, Angga Pratama/Ricky Karanda Suwardi (Indonesia) made up for the loss of their compatriots Mohammad Ahsan/Hendra Setiawan by getting past Malaysia’s Goh V Shem/Tan Wee Kiong, 21-16 21-13. World champions Ahsan/Setiawan were outplayed by China’s Zhang Nan/Fu Haifeng (below), 21-9 21-18.