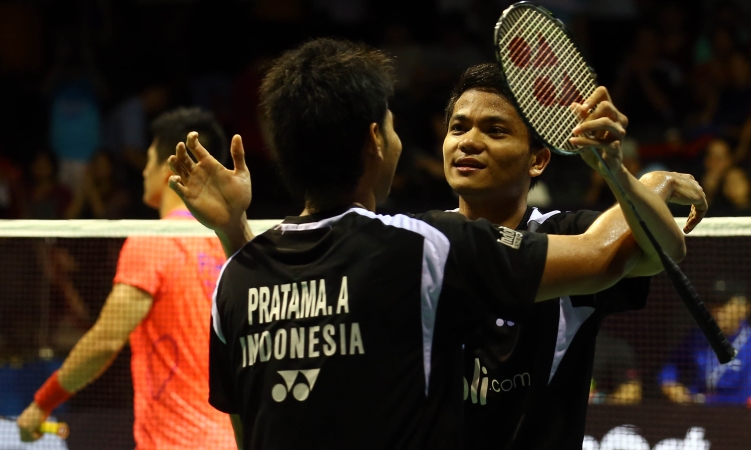 far, the race to qualify for the year-ending Dubai World Superseries Finals couldn’t be tighter.

While Zhang Nan/Zhao Yunlei have been the dominant pair in Mixed Doubles, the scene is noticeably different in the other two paired events on the MetLife BWF World Superseries circuit. No single pair has been able to impose itself and the race appears wide open.

Denmark’s Mathias Boe/Carsten Mogensen (No.7), after a sedate second half of 2014, shot back to form winning the Men’s Doubles title at the Yonex All England Open, the first Superseries event of 2015. Boe/Mogensen held off China’s Fu Haifeng/Zhang Nan on championship Sunday. The Chinese (No.2) have had a strong season thus far, even though they failed to win a Superseries. They made two more finals – the OUE Singapore Open and the BCA Indonesia Open. In Singapore they unexpectedly fell to Indonesia’s Angga Pratama/Ricky Karanda Suwardi. Over in Indonesia, having stopped home favourites Ahsan/Setiawan in the semi-finals, they ran into resurgent World champions Ko Sung Hyun/Shin Baek Choel (Korea). The World champions (No.20), not seen in action the first four months of this year, roared back to form at the Australian Open in May, making the quarter-finals, following which they went all the way in Indonesia, en route beating top-seeded compatriots Lee/Yoo (No.4), who haven’t quite displayed the authority they had last year.

It was only at the Australian Open that Lee/Yoo claimed their first Superseries title of 2015, retaining the honour they won last year.

Thanks to their consistency in making at least the quarter-final of all six events, Japan’s Hiroyuki Endo and Kenichi Hayakawa find themselves atop the BWF Destination Dubai Rankings.

In third spot is China’s Chai Biao/Hong Wei, who picked up their first Superseries title as a pair, at the Yonex-Sunrise India Open. Ahsan/Setiawan (No.5) impressively won the Malaysia Open from match point down against Lee/Yoo. Ahsan/Setiawan’s nemeses turned out to be Zhang Nan/Fu Haifeng, who won each of the three times they faced off.

Denmark’s Mads Conrad-Petersen/Mads Pieler Kolding (No.6) had a solid start to the year (semi-finals at the All England and final at the India Open) but were unable to maintain that form. Chinese Taipei’s Lee Sheng Mu/Tsai Chia Hsin (No.8) blew an opportunity to make the final in Malaysia squandering a match point against top seeds Lee/Yoo in the semi-finals. The Chinese Taipei pair couldn’t quite carry on with the same level over the next few events. The surprise package was Indonesia’s Angga Pratama/Ricky Karanda Suwardi, partners only since last November, who stunned Lee/Yoo, Endo/Hayakawa and Fu/Zhang in a sensational three-day spell to claim their first Superseries title, the Singapore Open. this year and excelled with all three – Bao Yixin at the All England, Ma Jin at the Badminton Asia Championships and Australian Open, and Yu Yang at the Vivo BWF Sudirman Cup. Although Tang/Ma Jin are ranked relatively low in the Destination Dubai Rankings, at No.18, they would be the pair to watch, assuming head coach Li Yongbo sticks with this combination. Tang chalked up 29 wins against only two losses with her three partners and picked up six titles, including two Superseries (All England and Australian Open) and the Sudirman Cup.

As China experiments with different combinations, there is currently only one Chinese duo (Luo Ying/Luo Yu, No.2) in the top eight. The Luo twins won their first Superseries title in Malaysia after coming up short in the India Open final. Their compatriots Yu Xiaohan/Ou Dongni (No.10) also won their first Superseries title in Singapore, beating Japan’s Misaki Matsutomo/Ayaka Takahashi (Japan). Two European pairs are in the top ten: Denmark’s Christinna Pedersen/Kamilla Rytter Juhl (No.3) and Netherlands’ Selena Piek/Eefje Muskens (No.9). The Danes made the semi-finals in India and Australia, while the Dutch were frequent quarter-finalists.

Indonesia’s Greysia Polii/Nitya Krishinda Maheswari (No.4) rode home-crowd energy to produce a sparkling performance on their turf at the Indonesia Open. Polii/Maheswari fought past two Chinese pairs before running into Tang Jinhua/Tian Qing in the finale. Of the two Korean two pairs in the top ten, Chang Ye Na/Jung Kyung Eun (No.6) made the final in Malaysia, where they fell tamely to the Luo twins. Other pairs in the top ten – Reika Kakiiwa/Miyuki Maeda (Japan; No.5), Jwala Gutta/Ashwini Ponnappa (India; No.7), Lee So Hee/Shin Seung Chan (Korea; No.8) and Eefje Muskens/Selena Piek (Netherlands; No.9) – have boasted no spectacular results in the World Superseries so far this year.

Lee Chun Hei/Chau Hoi Wah (No.9) caused the biggest Mixed Doubles surprise of the season, winning their first World Superseries in Australia after unremarkable performances since

China have dominated the category, winning five of six events. Zhang Nan/Zhao Yunlei continued from last season, taking three titles thus far – All England, Malaysia Open and Singapore Open – in four finals. Old foes Xu Chen and Ma Jin were again on the receiving end of their compatriots’ victorious run as they fell in Malaysia to their 19th loss in 21 meetings. However, Ma Jin rediscovered some of her old aggression and sharpness midway through 2015, and she engineered a turnaround in Indonesia, where Xu/Ma beat Zhang/Zhao for Superseries Premier honours.

Fischer/Pedersen (No.5) have had good results although they have not triumphed at an event yet. The Danes fell to Chinese opponents in three tournaments – including the India Open final – and conceded it is getting harder against the younger crop. Tontowi/Natsir (No.2) were frequent semi-finalists but crashed to four-straight defeats by Zhang/Zhao. The Indonesians would have earned some consolation with the Asian title over Xu/Ma but their confidence appears to have fallen a notch since last year.

Korea’s Ko Sung Hyun/Kim Ha Na (No.7), England’s Chris Adcock/Gabrielle Adcock (No.8) and Indonesia’s Praveen Jordan/Debby Susanto (No.10) had their moments but could not break the dominance of the top partnerships.