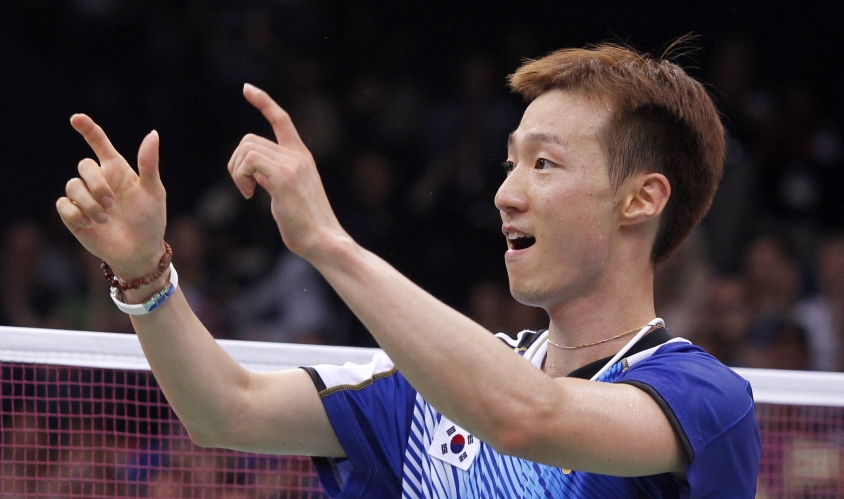 The 17-year-old Japanese, winner of the Dutch Junior 2015 earlier this year, capped a sensational week by beating Youth Olympic Games champion He Bing Jiao (China) 21-16 21-18 in the Women’s Singles final. The teen, ranked No.610, made the main draw without having to play her qualifying round matches. She went on to beat Annika Horbach (Germany) in the first round, No.2 seed Chen Jiayuan (Singapore) in the second, Wendy Chen (Australia) in the quarter-finals and No.5 seed Cheung Ngan Yi (Hong Kong) in the semi-finals before authoring the impressive upset over the favourite. He Bing Jiao had to overcome Japanese opponents in the quarter-finals (Natsuki Nidaira) and semi-finals (Aya Ohori) before succumbing to the third in the final.

While the Women’s Singles title was claimed by an unheralded teen, the Men’s Singles title went to seasoned campaigner Lee Hyun Il (featured image). The Korean left-hander outplayed China’s Qiao Bin 21-12 21-14 in 43 minutes. Third seed Lee’s hardest battle was in the quarter-finals, against China’s Huang Yuxiang, which he won in three games (16-21 21-18 21-15). He overcame top seed Hsu Jen Hao (Chinese Taipei) comfortably before cruising through to the title.

The most enthralling contest on the day was the Women’s Doubles final. Japan’s Yuki Fukushima/Sayaka Hirota took the first game and had a commanding lead in the second but Xia/Zhong saved four match points before edging through a tight third game. The 17-21 24-22 21-19 win was achieved in 100 minutes. Huang Kaixiang/Zheng Si Wei ambushed No.2 seeds Andrei Adistia/Hendra Aprida Gunawan (Indonesia) in the first round in three games and were relatively unchallenged from then on. In the second round they beat Thailand’s Bodin Issara/Nipitphon Puangpuapech – this was Issara’s first event after serving a ban imposed on him by BWF for violating the BWF Players’ Code of Conduct at the Yonex Canada Open 2013. Huang and Zheng then overcame an Indonesian pair, Fajar Alfian/Muhammad Rian Ardianto, in the final: 16-21 21-17 21-9.

Zheng Si Wei/Chen Qingchen fought past top seeds Riky Widianto/Puspita Richi Dili (Indonesia) in the semi-finals. Their opponents in the final, Xia Huan/Yu Xiaoyu, had earlier stunned No.2 seeds Danny Bawa Chrisnanta/Vanessa Neo (Singapore) in the first round, 21-19 21-12. Zheng/Chen were comfortable winners in the title clash: 21-14 21-8.