Korea’s Son clinched his second BWF World Superseries title and Tai her third in the Men’s Singles and Women’s Singles finals respectively. China returned with two titles; Mohammad Ahsan a
nd Hendra Setiawan denied them a third with a come-from-behind victory in the Men’s Doubles.

Son Wan Ho played a tactically astute game against China’s Chen Long and emerged the unlikely winner. Unlike his semi-final win over Jan O Jorgensen (Denmark), which he played aggressively all through, Son employed a controlled pace, creating openings with silken touch at the net and fired the smash at the first opportunity. It was a finely balanced match, requiring fine touch and great nerve, and Son scarcely put a foot wrong. 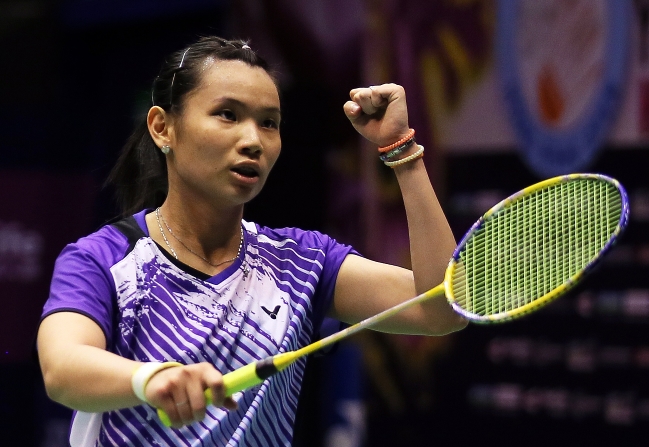 The second game, like the first, was tight towards the end. At 17-15 Son spotted a narrow opening and fired a smash; it was ruled out but Son won the challenge, and the point swung the match decisively his way: 21-19 21-16.

“This is an important win since Korea has not produced many Men’s Singles players lately and I hope this will inspire youngsters to take up the discipline,” Son said.

“I haven’t been consistent. The Asian Games team gold medal made a big difference and I hope I can remain steady in the top-five rankings.” 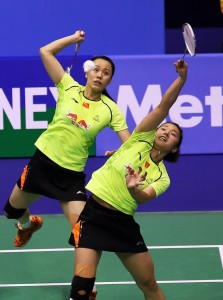 Two points, both won by Tai Tzu Ying in the first game, epitomised the Chinese Taipei player’s variety that she used to telling effect over Okuhara. A backhand that described a lazy arc and trapped Okuhara at the net, followed immediately by a wicked forehand that the Japanese couldn’t lay a racket on.

With this mixture of craft, elegant control and power, Tai claimed her first World Superseries title of the year. Okuhara chased the shuttle throughout the 47-minute contest as Tai toyed with her. Not even her impressive speed and court coverage could help Okuhara reach the spaces that Tai created with deft brushes, flicks and – when required – hammer blows that punched through the Japanese’s defence.

“It feels good to win the last Superseries of the year,” said a relieved Tai.

“I had to play quick because Okuhara, like other Japanese, is a fast runner. It turned out easier than I expected. I didn’t start the year well. Now I’m looking forward to the (BWF Destination Dubai) World Superseries Finals. Despite my win, I think the Chinese are still the best in Women’s Singles. It’s good that a non-Chinese player can win once in a while!”

Zhao Yunlei and Tian Qing were never really threatened by Misaki Matsutomo and Ayaka Takahashi in the Women’s Doubles final. Powered by Tian’s rasping hits from the back, the Chinese kept their opponents under fire for most of the contest. Matsutomo and Takahashi were unable to break the tight knit formation of Tian and Zhao. There was a brief period early in the second game when the Japanese went up 11-7 due to some loose play by Tian and Zhao. After the break, however, it was normal service with Zhao showing greater initiative and helping Tian with offensive duties. The World champions got their third Superseries title of the year winning the duel 21-13 21-13.

Zhao then returned with Zhang Nan continued their stranglehold over Xu Chen/Ma Jin, winning their 18th match out of 20 against their compatriots.

Xu and Ma looked likely to take the second game with an 18-16 lead, but Zhang produced a stunning service return that turned the tide towards the top seeds: 21-14 21-19. 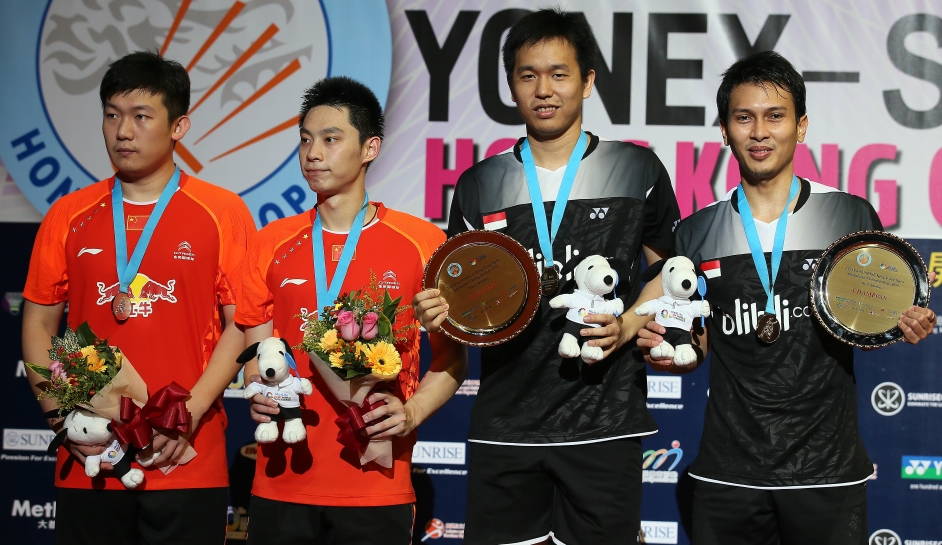 China’s Liu Xiaolong and Qiu Zihan nearly put paid to the hopes of No.2 seeds Mohammad Ahsan and Hendra Setiawan in the Men’s Doubles final. Having won the second game, and with a boisterous crowd behind them, the Chinese were all over the Indonesians early in the third. Uncharacteristically, Setiawan seemed to get shaky at the net, while Ahsan fluffed a few winners. At 11-7 it all seemed to be going China’s way but Ahsan and Setiawan turned it around remarkably.

“We had problems with the drift and were down in the third game, but we played at a quicker pace after the break and were able to get on top.”

Setiawan’s rediscovery of his netgame set up the winners for Ahsan and the Indonesians were back in their comfort zone, closing out the match 21-16 17-21 21-15.