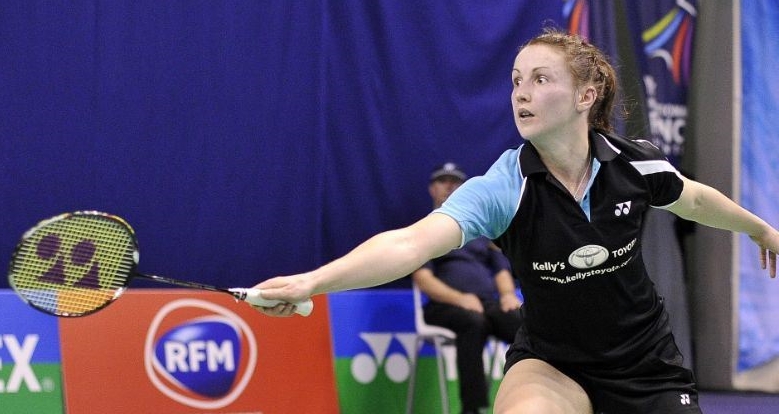 Beiwen Zhang’s impressive season continued into the Yonex French Open 2014 as she made the Women’s Singles quarter-finals yesterday.

The American, winner of four tournaments this year (Peru International, US Open, Brasil Grand Prix and Dutch Open), destroyed the challenge of Thailand’s Porntip Buranaprasertsuk in just 30 minutes in the second round. Buranaprasertsuk, who had earlier beaten India’s PV Sindhu, had no answers to Zhang as she went down 21-16 21-9.

Having taken eventual winner Li Xuerui (China) to three games at the Denmark Open last week, Zhang will be treated with caution by quarter-final opponent Wang Yihan, who had no problems in disposing off compatriot Liu Xin (21-13 21-13).

Meanwhile, another Chinese, Wang Shixian, set up her 10th meeting with long-time rival Saina Nehwal (India) after a three-game result over Japan’s Sayaka Takahashi. Nehwal, who leads their head-to-head 5-4, eased past Scotland’s Kirsty Gilmour 21-19 21-16. In the other quarter-finals, top seed Li will take on Ireland’s Chloe Magee (19-21 22-20 21-8 winner over Switzerland’s Sabrina Jaquet), while Thailand’s Ratchanok Intanon faces Japanese qualifier Akane Yamaguchi. Magee pulled off a near-miraculous win over Jaquet. Trailing by a game and with deficits of 8-14, 12-17 and three match points down at 17-20, Magee (featured image) still found the mental reserves to hang in and eventually turn it around: 19-21 22-20 21-8. Two Danes made the Men’s Singles quarter-finals. No.6 seed Hans-Kristian Vittinghus overcame a tough challenge from India’s K Srikanth in the first game before cruising through 22-20 21-14, while Viktor Axelsen had it easier against Japan’s Takuma Ueda, 21-11 21-10. Vittinghus faces No.4 seed Tommy Sugiarto (Indonesia), who was pushed to three games by Chinese qualifier Chen Yuekun: 15-21 21-16 21-15.

Kashyap Parupalli prevailed in a tight match against China’s Tian Houwei (21-19 21-18). Next up for the Indian is another Chinese, Wang Zhengming, who held off a late comeback from Germany’s Marc Zwiebler, 21-19 14-21 21-19, in 67 minutes. Japan’s Kento Momota also won a three-game match, over Hong Kong’s Hu Yun, and will play Thai Tanongsak Saensomboonsuk next.