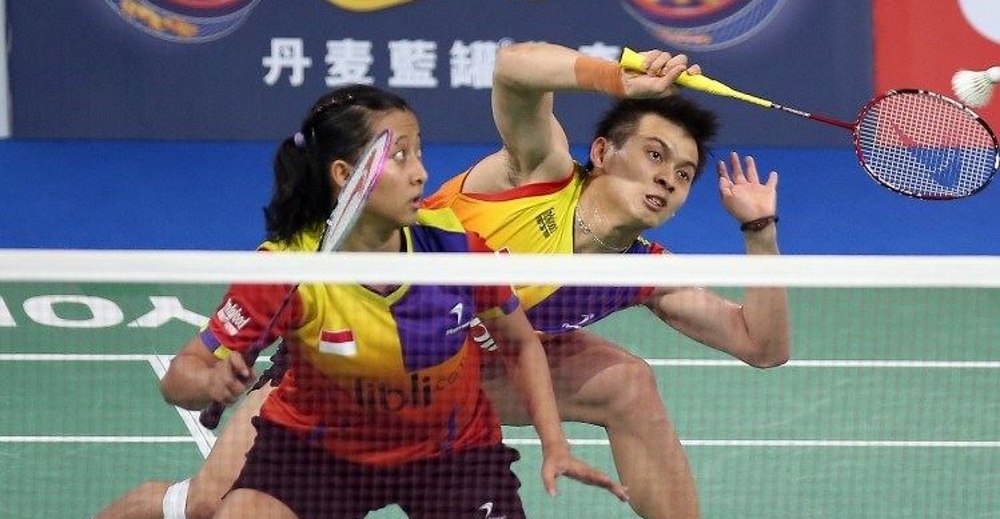 There will be new Women’s Doubles and Mixed Doubles champions at the Yonex Denmark Open as last year’s winners in these categories bowed out of the tournament today for different reasons.

In contrast to 2013 when they enjoyed repeated success including a top-podium finish at Odense Sports Park, the Women’s Doubles partnership of Bao Yixin and Tang Jinhua has shown vulnerability this season. The Chinese No.1 seeds again perished in a major event – falling 23-21 21-14 to an impressive performance from No.6 seeds, Reika Kakiiwa and Miyuki Maeda (below; right); the Japanese pair who beat them at the Yonex All England Championships in March.

“We didn’t think about All England. Instead we watched a video of our loss to them to see the mistakes we made,” noted Kakiiwa, adding they hope to play just as well in the semi-final versus team-mates Misaki Matsutomo/Ayaka Takahashi.

Meanwhile, Zhao Yunlei – who was defending the Mixed Doubles crown with Zhang Nan – pulled out of their quarter-final with a knee injury. Her withdrawal allowed Chinese team-mates Liu Cheng/Bao Yixin to progress to tomorrow’s semi-finals. By Zhao’s lofty standards this was a disappointing outing as the Olympic and World champion earlier lost her Women’s Doubles match with Tian Qing. The No.4 seeds suffered a hard-fought demise (21-15 15-21 21-19) to compatriots, Ma Jin and Tang Yuanting, seeded one place lower. “We are familiar with each other so who wins depends on who plays better on the day. I have to give a lot of credit to my partner. She was the youngest out there and she played very well,” said doubles specialist Ma Jin.

The Commonwealth Games gold medallist hushed the Odense crowd with a composed 21-19 21-15 victory that sets him up against Chen Long for a place in Sunday’s final.

“I tried to maintain the pace because I know he was going to play fast and I wanted to be ready at net because the last time we played I made mistakes at net. I was confident I could win,” said the Indian shuttler (below).

Indonesia assured themselves of a Mixed Doubles finalist as both their pairs – Tontowi Ahmad/Liliyana Natsir and Riky Widianto/Puspita Richi Dili (featured image) – disposed of Danish opposition to book an appointment across the net from each other. The latter withstood a late charge to upset the accomplished Joachim Fischer Nielsen/Christinna Pedersen (below), 21-19 14-21 21-19, and reach their first Superseries Premier semi-final in an hour and 18 minutes.

“The Danes are more experienced and we had nothing to lose in this match. We lost the second game because of mistakes and in the third game we tried to play more attacking like we did in the first game. We know Fischer Nielsen has a dangerous smash so we tried to keep the shuttle low,” said Dili, adding they had exceeded their target of making the quarter-final.

Immediately after on the same court, their senior compatriots Ahmad and Natsir repelled the challenge of another host pair, Mads Pieler Kolding/Kamilla Rytter Juhl. In similar fashion, the Indonesians dropped the middle game before coming through, 21-15 16-21 21-18.

China will occupy the other slot in the Mixed Doubles finals, either to be taken by Xu Chen/Ma Jin or Liu Cheng/Bao Yixin. * Only Sung Ji Hyun (right) stands between China and the Women’s Singles title. The imposing trio of Li Xuerui, Wang Shixian and Wang Yihan duly advanced to the semi-finals and, unless the lone Korean among them conjures up something magical versus Li, the honours in this category will belong to Beijing again. However, the top guns didn’t have it all their way today as Li had to come from a game down against Beiwen Zhang of the USA (15-21 21-15 21-12) and Wang Shixian had her hands full with PV Sindhu. The Indian star would be disappointed not to have at least taken their encounter the distance, having led 18-15 in the first game and held a 19-16 advantage and a game point (20-19) in the second before losing 25-23 22-20.

* A repeat of the Men’s Doubles finale at the Li-Ning BWF World Championships could be in store as both Korean pairs – Ko Sung Hyun/Shin Baek Choel and Lee Yong Dae/Yoo Yeon Seong – are into the final four. First, Lee and Yoo will have to get past Mathias Boe/Carsten Mogensen (below); the only Danes left in the tournament. The resilient home pair gave a rousing 16-21 21-18 21-15 performance to quell the challenge of China’s Chai Biao/Hong Wei.

“They are a tricky pair and it was difficult for us. We fought to get our rhythm going. I think the key was our return game. They didn’t get too many points in a row. Tomorrow will be tough against the Koreans but we are hungry for a rematch since they beat us at the World Championships,” said Mogensen.