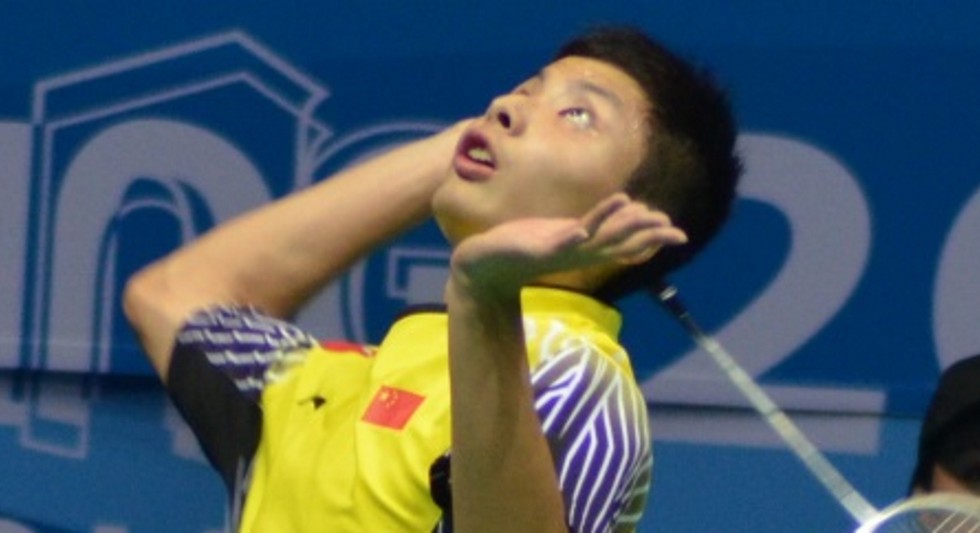 The two singles finals at the Youth Olympic Games will be a repeat of the World Junior Championships 2014, with China assured of at least one gold medal.

Top seed Shi Yuqi and World Junior champion Lin Gui Pu (2) ensured that the Men’s Singles gold medal would be China’s after hard-fought semi-final victories, while in Women’s Singles He Bing Jiao will have a chance to avenge her World Junior Championships final loss to Akane Yamaguchi (Japan).

The opening encounter, between He Bing Jiao and Busanan Ongbumrungpan, did not live up to expectations, with local hope He demolishing the Thai’s challenge 21-14 21-16. Ongbumrungpan was unable to come to terms with her big-hitting opponent and never looked confident during the 39-minute encounter.

However, the next few matches created plenty of suspense. Yamaguchi (below) had lost to Chinese Taipei’s Lee Chia Hsin in the team event of the World Junior Championships, and for a while she was under pressure.

Yamaguchi started strongly, raining smashes on her opponent as Lee struggled with her length. The Chinese Taipei player was inconsistent throughout the first game and presented Yamaguchi with enough chances to take the opening game in a canter.

With a 10-3 lead in the second, Yamaguchi was running away with the match. However, the tide slowly turned. Lee started to find her range, working out unusual angles and winning the net exchanges with clever placements. Shifting to the low serve instead of the high serve that gave her opponent the chance to put her under pressure from the return, Lee plucked several points in a row, using her deceptive cross net shots and flicks from the net to drag Yamaguchi off position. A winning net shot helped her to a game apiece. Unfortunately for Lee, she just could not maintain that rhythm in the decider.

While Yamaguchi remained steady as always, Lee fell behind mainly due to her errors. Yamaguchi established a comfortable lead and even though Lee did not give up, the result was never in doubt: 21-11 18-21 21-15.

“Last time, she beat me at the World Junior Championships by exploiting spaces in front of me, so this time I kept her at the back,” Yamaguchi said. “I just took it step by step today. I didn’t worry too much when I lost the second game as I have lost a few games in this tournament.”

Shi Yuqi had breezed through the draw without losing a game and maintained the same flow in the opening game against India’s Aditya Joshi. He set a scorching pace that Joshi struggled to match.

The Indian however made a match of it in the second. Displaying patience in the rallies and anticipating Shi’s shots well, Joshi changed the complexion of the match. His brilliant retrievals to Shi’s smashes saw engrossing rallies. The two were neck-and-neck going into the closing stages of the game. Joshi had two game points but Shi saved both before he captured the final point, firing into an empty court with Joshi sprawled on the floor following a dive to keep the rally going.

“I’m disappointed at the way I played the first game,” said Joshi, who lost 21-10 24-22. “I started very badly. I gave a big lead and decided to play for the second game. I had two game points in the second game. I knew he was playing half-smashes most of the time so I was ready for that, but yet I had to dive because he was hitting those half-smashes perfectly. The main problem was his speed and perfection of strokes. He kept finding the lines. You have to stretch to return each time and you can’t get easy points.”

The next semi-final was tighter. Ginting Anthony (Indonesia) struck an early blow, but Lin (above) recovered and held him off after a nerve-wracking contest that kept the crowd on the edge throughout: 19-21 21-19 21-17.